Officers stand by in 1955 as religious leaders from Chicago demonstrate outside the White House in Washington over the murder of 14-year-old Emmett Till.
AP

“All were shocked, some horrified and appalled. Many prayed, scores fainted and practically all, men, women, and children wept.” In their September 15 issue, Jet magazine published an unedited photo of Till’s face as he lay in his coffin.

At the same time, the police chief officer Strider announced there was enough evidence to arrest J.W. Milam and Roy Bryant. On September 6th, while Emmett Till was buried at Chicago Cemetery, the two suspects were alleged for murder in court.

The trial of J.W. Milam and Roy Bryant started on September 19th, 1955 at Tallahatchie County Courthouse. All the newspapers sent reporters to witness from the New York Times, the Chicago Defender to The Atlanta Consitution … However, the black reporters still had to sit in a separate area with white reporters and farther from the jury. It was rare to have a trial like this in Mississippi. Every African American, who was brave enough to testify, were putting themselves in danger. Black people feared violent actions and segregation from the White people. However, the impact of an innocent 14 years old boy killed because of racism surpassed those fears. On the other hand, the entire jury had not a single colored person even though African Americans were 65% of the population in Tallahatchie County. All of the jury members were White. The Emmett Till Jury

Milam and Bryant went to the court with a lot of confidence along with their wives. 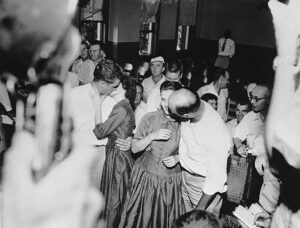 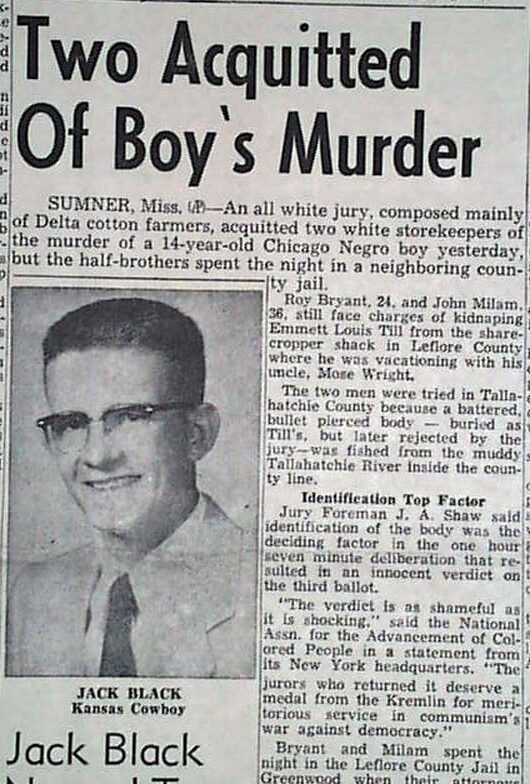 January 27, 2017, For six decades, she has been the silent woman linked to one of the most notorious crimes in the nation’s history, the lynching of Emmett Till, a 14-year-old black boy, keeping her thoughts and memories to herself as millions of strangers idealized or vilified her.

But all these years later, a historian says that the woman has broken her silence, and acknowledged that the most incendiary parts of the story she and others told about Emmett — claims that seem tame today but were more than enough to get a black person killed in Jim Crow-era Mississippi — were false.

The woman, Carolyn Bryant Donham, spoke to Timothy B. Tyson, a Duke University professor — possibly the only interview she has given to a historian or journalist since shortly after the episode — who has written a book, “The Blood of Emmett Till,” to be published next week.

In it, he wrote that she said of her long-ago allegations that Emmett grabbed her and was menacing and sexually crude toward her, “that part is not true.” In a newly revealed 10-year-old interview to be published in a book, Carolyn Bryant, the wife of one of the men arrested for Till’s murder and the woman whose testimony carried the case, admitted her account was ‘not true.
Speaking to DailyMail.com after Bryant’s confession was revealed, Till’s cousin Wheeler Parker who was with him the night of the incident – and when he was taken from his bed to his death, said: ‘My family thinks she’s trying to make money but being a preacher, I think she is trying to find a way to go heaven now.’
Parker, now a pastor of a church in Illinois that Till and his mother attended, added: ‘Whatever the motive, I am very pleased that she’s telling the truth.’

THIS DAY IN HISTORY

On January 24, 1956, Look magazine publishes the confessions of J.W. Milam and Roy Bryant, two white men from Mississippi who were acquitted in the 1955 kidnapping and murder of Emmett Louis Till, an African American teenager from Chicago. In the Look article, titled “The Shocking Story of Approved Killing in Mississippi,” the men detailed how they beat Till with a gun, shot him and threw his body in the Tallahatchie River with a heavy cotton-gin fan attached with barbed wire to his neck to weigh him down. The two killers were paid a reported $4,000 for their participation in the article.

In August 1955, 14-year-old Till, whose nickname was Bobo, traveled to Mississippi to visit relatives and stay at the home of his great-uncle, Moses Wright. On August 24, Till went into Bryant’s Grocery and Meat Market in Money, Mississippi, to buy candy. At some point, he allegedly whistled at Carolyn Bryant, a white woman who ran the store with her husband Roy, who was away at the time. (Bryant later admitted she made this up.) Till’s a harmless actions carried weight in an era when prejudice and discrimination against Black people was persistent throughout the segregated South.

In the early hours of August 28, Roy Bryant and his half-brother, J.W. Milam, abducted Emmett Till from his great-uncle’s home. The men were soon arrested but maintained their innocence. On August 31, Till’s decomposed body was found in the Tallahatchie River. On September 3, Till’s mother held an open-casket funeral for her son, in order to bring attention to his murder. An estimated 50,000 mourners attended. Afterward, Jet magazine published graphic photos of Till’s corpse.

On September 19, the kidnapping and murder trial of Bryant and Milam began in Sumner, Mississippi. Five days later, on September 23, the all-white, all-male jury acquitted the two men of murder after deliberating for little over an hour. The jury claimed it would’ve reached its decision even more quickly—despite overwhelming evidence that the defendants were guilty—had it not taken a soda break. The acquittal caused international outrage and added fuel to the emerging American civil rights movement.

Milam and Bryant were never brought to justice and both later died of cancer. In 2004, the U.S. Justice Department reopened the case amid suggestions that other people—some of whom are still alive—might have participated in the crime. Till’s body was exhumed by the FBI in 2005 and an autopsy was performed. In 2007 a grand jury decided not to seek an indictment against additional individuals. In 2017, Tim Tyson, author of the book The Blood of Emmett Till, revealed that Carolyn Bryant recanted her testimony, admitting that Till had never touched, threatened or harassed her. “Nothing that boy did could ever justify what happened to him,” Bryant said.

Although the media really wanted to involve in this story, Milam and Bryant did not have to worry since Mississippi citizens did not support the outsiders, especially the black or Northern people, interfering in their local cases. Many attendants even shook hands and wished Milam luck.

During the testimony, Moses Wright was the first person to witness. He pointed to Milam and claimed that was the guy on August 28th night with a gun and took Emmett Till away. Moses Wright’s testimony in the trial of his great-nephew’s accused killers would go down in history as one of the bravest moments of the civil rights movement. 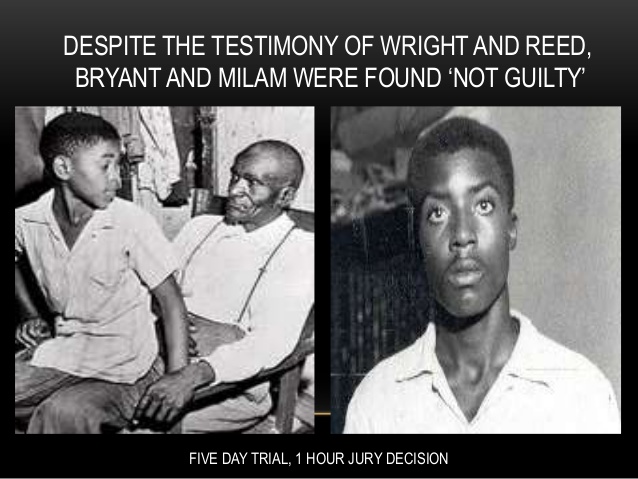 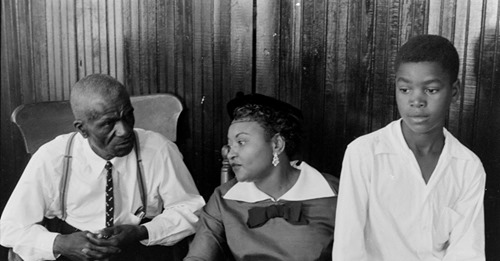 Understanding that no colored person had ever directly charged a white man in court, Wright still stood up in front of many angry white people on that day. “That was the first time in my life I was brave enough to charge a white man. That was not a brave act nor did I not fear. I just want justice”, he said. The next person to testify was Mrs. Till. With a surprisingly calm voice, she answered every question without any hesitation. To defend against people who did not believe the found body was Emmett Till, Mamie Till confirmed that the ring with “L.T” engraved on it was from Emmett Till’s father. As all the evidence against Milam and Bryant was proved, a twisted event happened. The chief police officer of Tallahatchie County, H.C. Strider was called to testify for the defendants. When being asked about the dead body, Strider claimed that it was impossible to identify the person even the color of his skin. And with just that claim, Mr. J.A. Shaw, the jury foreman, read the verdict: “Not guilty!” Roy Bryant (left), smokes a cigar as his wife happily embraces him. His half-brother, J.W. Milam, and his wife show jubilation. Bryant and Milam were cleared by an all-White, male jury of the charge of having murdered Till, a 14-year-old Chicago boy who was Black. The jury was out just one hour and 7 minutes.

More than ever, Americans seemed to be upset with the ridiculous result. During an interview with Chicago Defender after the trial, Mamie Till said: “This is the biggest joke I have ever witnessed.” Even Mrs. Eleanor Rooservelt, the First Lady, had to speak up about the final verdict. She hoped that the United States of America needs to prove itself as an iconic figure of liberty, with justice must be served. Although African Americans lost their support in Emmett Till’s murder in court, they finally showed the rest of the world why the Civil Rights Movement was necessary.  Months later, protected by the double jeopardy rule, Bryant and Milam admitted to killing Emmett Till in an interview with Look Magazine in 1956. During the interview, Bryant and Milam even showed some disrespect towards Till’s death as to why people tried to keep the boy’s image live on.