Broadway Buzz A Raisin in the Sun – Broadway Broadway.com 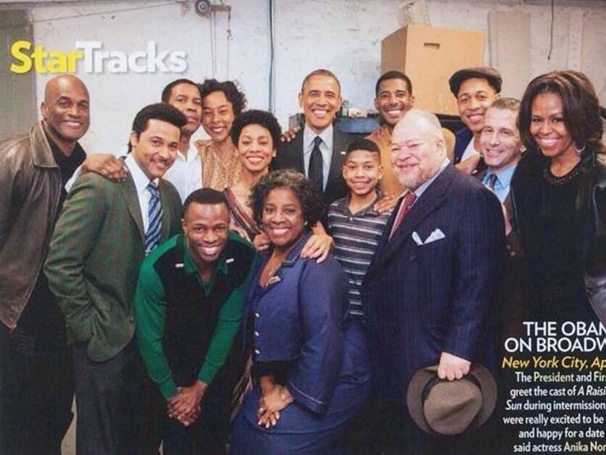 President Barack Obama and First Lady Michelle Obama with the cast of A Raisin in the Sun in People Magazine.

Denzel Washington and the cast of A Raisin in the Sun had two extra special guests in the audience on April 11: President Barack Obama and First Lady Michelle Obama! The first family arrived in New York City in style (in fact, the whole block was closed off for their visit!) then headed to the Ethel Barrymore Theatre to see the beloved drama by Lorraine Hansberry unfold. Set in Chicago (where the President calls home), A Raisin in the Sun chronicles the life of an African-American family in the 1950s struggling to make ends meet. Check out this Hot Shot from People magazine of the whole cast meeting the Obamas’, then see them in A Raisin in the Sun on Broadway!

{“President Barack Obama and first lady Michelle Obama on Friday watched A Raisin in the Sun at Broadway’s Ethel Barrymore Theatre, where the stage masterpiece debuted more than 50 years ago, the Associated Press reports.
They received a round of applause as they took their seats during the wildly popular production, which stars Denzel Washington, the news site reports.”}