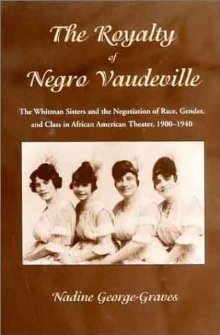 Because they were light-skinned, they dyed their hair blonde, looking very much like Gibson Girls who were able to start their show business career touring in many white Vaudeville shows. The Whitman Sisters would become the highest-paid Black act on the Negro Vaudeville circuit.  They managed their own shows which became the biggest, classiest, fastest, flashiest most dignified shows in Black vaudeville.

“Bert” and Alice (Source: Nadine George-Graves, 2000). the Whitman Sisters perform in Philadelphia, 1930. The Black vaudeville troupe featured four sisters, Alberta (“Bert”) who performed in male drag, Mabel, Essie, and Alice, who was one of the best tap dancers of the era.

These four women danced, sang, and played banjos and were profoundly talented entertainers and impressive entrepreneurs, whose own Stage company would be the very springboard for many up and coming musical and stage luminaries to come. They would have anywhere from 20 to 30 performers in the show and had six to eight programs running at any one time and always did a Shake Dance to Diga-diga-do.

Mabel (or May) successfully ran the production company and was the producer, manager, and director.  She was a voice of change in the racially corrupt practices and racial segregation in vaudeville. In 1910 Mabel created her own troupe of Picks (Pickaninny’s) called Mabel Whitman and the Dixie Boys while Mabel sang and the boys danced. Mabel was the first to quit performing in the shows.  May also coached the Picks in the shows.

Essie who was a big-voiced comic-singer and labeled as a real coon shouter at the time was in charge of designing and making the costumes for the group. Essie retired in the late twenties and became a preacher at the Metropolitan Church.

Alberta (or Bert) who was an agile flash dancer also worked as a male impersonator in most of her acts and handled all the show’s finances. She was in charge of the music end and composed much of the music that the group would use. Alberta did the “Strut” as her dance act. Alice, the youngest was regarded by many as the “Queen of Taps and Champion Cakewalk dancer.” Alice joined the group in 1909 and would sing and dance. She was praised by many for having a fabulous figure as well. She did many dances of the day including the Shim Sham Shimmy, Ballin’ The Jack, Walkin’ the Dog, and the Sand as well as the standards like Tap dance. Alice’s son Albert also joined the show and grew to become a great dancer in his time.