Alde Lewis, Jr., began his career as a modern dancer with Dianne McIntyre’s Sounds in Motion Dance Company in New York City. He credits the late tap veteran Charles “Honi” Coles for inspiring him to become a tap dancer after Mr. Coles offered to mentor him early in his performing career. Coles, a veteran performer of stage, film, concert stage and winner of both Tony and Drama Desk Awards for his performance in the Broadway musical My One and Only, was in semi-retirement at the time and working at the world-famous Apollo Theater. He suggested that Lewis become a tap dancer after seeing him win the coveted Amateur Night at the Apollo contest as a dancer.

Mr. Lewis went on to have extensive credits in dance, film, television, and theatre as an actor, dancer, director, and choreographer. An original cast member in the Broadway musical My One and Only, Lewis originated the role of “Otis” in the musical Big Deal, Bob Fosse’s last Broadway production. He toured with the Sophisticated Ladies national touring company and was the featured Tap Dancer in Cab Calloway’s Cotton Club Revisited. Lewis has appeared in numerous Off-Broadway and regional theaters as well. He was in the cast of Francis Ford Coppola’s film The Cotton Club.

In addition to his work on the stage, Mr. Lewis is credited as an Executive Producer and actor in the feature film Arbiter Roswell, directed by Wendell B. Harris and starring Steven Soderbergh. Now as a curator, producer, and presenter for The Paul Robeson Theater in Houston, Texas, Lewis in addition to adding musical playwright to his credits seeks to mount his original musical play, Dee’s Days of Tap Dancing in Time, of which he both penned the book and lyrics, in the very near future.

“Alde Lewis Jr, Founder / Artistic Director of A. L. Efficacy Movement (ALEM), directs a professional modern dance/theater production ensemble. Through the ALEM ensemble, we pay tribute to the centuries-old bodies of work of the African American artist…the poets, dancers, entertainers, writers, actors, singers, and choreographers. Through the use of excerpts from their classic works and the stories of their lives, we bring new audiences a powerful message of perseverance, community, power, and love. Melding modern, ballet, tap, and jazz dance with storytelling, spoken word/poetry propelled by the power of live instrumental and vocal performance, ALEM brings forth a unique motion and sound experience of storytelling, conveying our message of success through efficacy.”

“Alde Lewis, (Mr. Magix, relationship advisor) gives a standout performance the minute that he literally stands up from his chair. His Magix has a suave air and dry sense of humor, with tap-dancing feet that create a capella music. The title song and very long tap and soft-shoe number by Yazbeck and Lewis is the showstopper. The audience reaction indicated that the piece wasn’t long enough – give ’em more.” —
by Shera Cohen The Spotlight inc 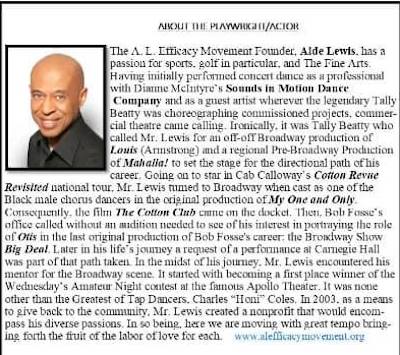 The A. L. Efficacy Movement Founder, Alde Lewis, has a passion for sports, Golf in particular, and The Fine Arts. Having initially performed concert dance as a professional with Dianne McIntyre’s Sounds in Motion Dance Company and as a guest artist wherever the legendary Tally Beatty was choreographing commissioned projects, commercial theatre came calling. Ironically, it was a Tally Beatty who called Mr. Lewis for an off-off-Broadway production of “Louis” (Armstrong) and a regional Pre-Broadway Production of “Mahaliah!” to set the stage for the directional path of his career. Going on to star in Cab Calloway’s “Cotton Revue Revisited” national tour Mr. Lewis turned to Broadway when cast as one of the Black male chorus dancers in the original production of “My One and Only”. Consequently, the Film “The Cotton Club” came on the docket. Then Bob Fosse’s office called without an audition needed to see of his interest in portraying the role of “Otis” in the last original production of Bob Fosse’s life…The Broadway Show “Big Deal.” Later in his life’s journey, a request for a performance at Carnegie Hall was part of that path taken. In the midst of his journey, Mr. Lewis encountered his mentor for the Broadway scene. It started with becoming a first-place winner of Wednesday’s Amateur Night contest at the famous Apollo Theater. It was none other than the Greatest of Tap Dancers, Charles “Honi” Coles. In 2003 as a means to give back to the community, Mr. Lewis created a nonprofit that would encompass his diverse passions. In so being, here we are moving with great tempo bringing forth the fruit of the labor of love for each.​ 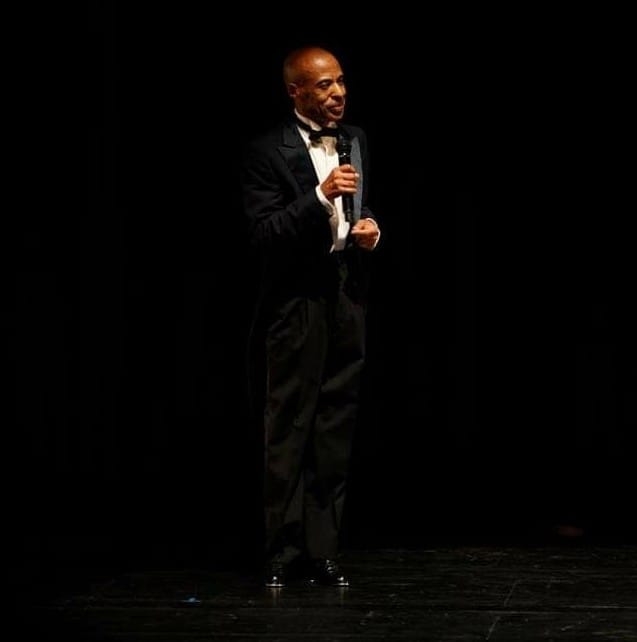