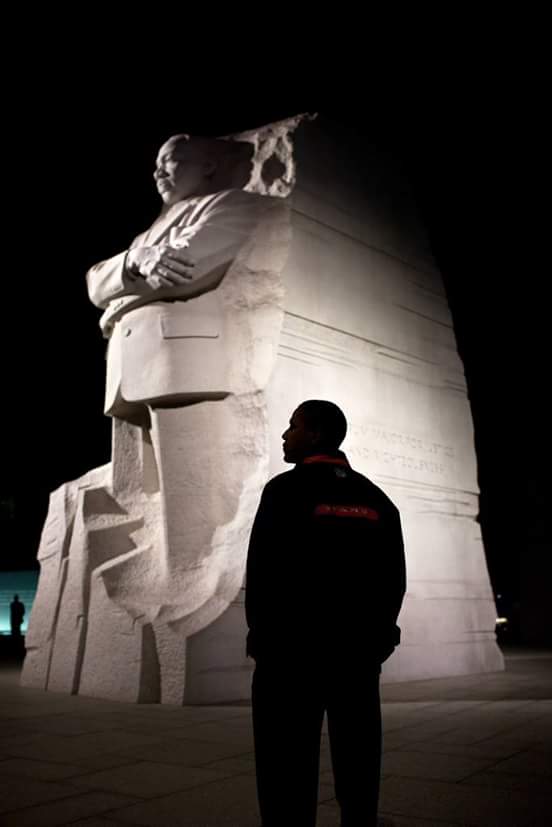 The Triple Evils of POVERTY, RACISM, and MILITARISM are forms of violence that exist in a vicious cycle. They are interrelated, all-inclusive, and stand as barriers to our living in the Beloved Community. When we work to remedy one evil, we affect all evils. To work against the Triple Evils, you must develop a nonviolent frame of mind as described in the “Six Principles of Nonviolence” and use the Kingian model for social action outlined in the “Six Steps for Nonviolent Social Change.”

Some contemporary examples of the Triple Evils are listed next to each item:

“There is nothing new about poverty. What is new, however, is that we now have the resources to get rid of it. The time has come for an all-out world war against poverty … The well-off and the secure have too often become indifferent and oblivious to the poverty and deprivation in their midst. Ultimately a great nation is a compassionate nation. No individual or nation can be great if it does not have a concern for ‘the least of these.”

“Racism is a philosophy based on a contempt for life. It is the arrogant assertion that one race is the center of value and object of devotion, before which other races must kneel in submission. It is the absurd dogma that one race is responsible for all the progress of history and alone can assure the progress of the future. Racism is total estrangement. It separates not only bodies but minds and spirits. Inevitably it descends to inflicting spiritual and physical homicide upon the out-group.”

“A true revolution of values will lay hands on the world order and say of war ‘This way of settling differences is not just.’ This way of burning human beings with napalm, of filling our nation’s homes with orphans and widows, injecting poisonous drugs of hate into the veins of people normally humane, of sending men home from dark and bloody battlefields physically handicapped psychologically deranged, cannot be reconciled with wisdom, justice, and love. A nation that continues year after year to spend more money on military defense than on programs of social uplift is approaching spiritual death.”

Fundamental tenets of Dr. King’s philosophy of nonviolence are described in his first book, Stride Toward Freedom. The six principles include:

The Six Steps for Nonviolent Social Change are based on Dr. King’s nonviolent campaigns and teachings that emphasize love in action. Dr. King’s philosophy of nonviolence, as reviewed in the Six Principles of Nonviolence, guide these steps for social and interpersonal change.

Based on Martin Luther King, Jr.’s “Letter from Birmingham Jail” in Why We Can’t Wait, Penguin Books, 1963.

We often view the Six Steps as phases or cycles of a campaign rather than steps because each of them embodies a cluster or series of activities related to each of the other five elements.

“The Beloved Community” is a term that was first coined in the early days of the 20th Century by the philosopher-theologian Josiah Royce, who founded the Fellowship of Reconciliation. However, it was Dr. Martin Luther King, Jr., also a member of the Fellowship of Reconciliation, who popularized the term and invested it with a deeper meaning which has captured the imagination of people of goodwill all over the world.

For Dr. King, The Beloved Community was not a lofty utopian goal to be confused with the rapturous image of the Peaceable Kingdom, in which lions and lambs coexist in idyllic harmony. Rather, The Beloved Community was for him a realistic, achievable goal that could be attained by a critical mass of people committed to and trained in the philosophy and methods of nonviolence.

Dr. King’s Beloved Community is a global vision, in which all people can share in the wealth of the earth. In the Beloved Community, poverty, hunger, and homelessness will not be tolerated because international standards of human decency will not allow it. Racism and all forms of discrimination, bigotry, and prejudice will be replaced by an all-inclusive spirit of sisterhood and brotherhood. In the Beloved Community, international disputes will be resolved by peaceful conflict-resolution and reconciliation of adversaries, instead of military power. Love and trust will triumph over fear and hatred. Peace with justice will prevail over war and military conflict.

Dr. King’s Beloved Community was not devoid of an interpersonal, group or international conflict. Instead, he recognized that conflict was an inevitable part of human experience. But he believed that conflicts could be resolved peacefully and adversaries could be reconciled through a mutual, determined commitment to nonviolence. No conflict, he believed, need erupt in violence. And all conflicts in The Beloved Community should end with a reconciliation of adversaries cooperating together in a spirit of friendship and goodwill.

As early as 1956, Dr. King spoke of The Beloved Community as the end goal of nonviolent boycotts. As he said in a speech at a victory rally following the announcement of a favorable U.S. Supreme Court Decision desegregating the seats on Montgomery’s buses, “the end is reconciliation; the end is redemption; the end is the creation of the Beloved Community. It is this type of spirit and this type of love that can transform opponents into friends. It is this type of understanding goodwill that will transform the deep gloom of the old age into the exuberant gladness of the new age. It is this love which will bring about miracles in the hearts of men.”

An ardent student of the teachings of Mohandas K. Gandhi, Dr. King was much impressed with the Mahatma’s befriending of his adversaries, most of whom professed profound admiration for Gandhi’s courage and intellect. Dr. King believed that the age-old tradition of hating one’s opponents was not only immoral but a bad strategy that perpetuated the cycle of revenge and retaliation. Only nonviolence, he believed, had the power to break the cycle of retributive violence and create lasting peace through reconciliation.

In his 1959 Sermon on Gandhi, Dr. King elaborated on the after-effects of choosing nonviolence over violence: “The aftermath of nonviolence is the creation of the beloved community so that when the battle’s over, a new relationship comes into being between the oppressed and the oppressor.” In the same sermon, he contrasted violent versus nonviolent resistance to oppression. “The way of acquiescence leads to moral and spiritual suicide. The way of violence leads to bitterness in the survivors and brutality in the destroyers. But, the way of non-violence leads to redemption and the creation of the beloved community.”

The core value of the quest for Dr. King’s Beloved Community was agape love. Dr. King distinguished between three kinds of love:  eros, “a sort of aesthetic or romantic love”; philia, “affection between friends” and agape, which he described as “understanding, redeeming goodwill for all,” an “overflowing love which is purely spontaneous, unmotivated, groundless and creative”…” the love of God operating in the human heart.” He said that “Agape does not begin by discriminating between worthy and unworthy people…It begins by loving others for their sakes” and “makes no distinction between a friend and enemy; it is directed toward both…Agape is love seeking to preserve and create community.”

In his 1963 sermon, Loving Your Enemies, published in his book, Strength to Love, Dr. King addressed the role of unconditional love in struggling for the beloved Community. ‘With every ounce of our energy, we must continue to rid this nation of the incubus of segregation. But we shall not in the process relinquish our privilege and our obligation to love. While abhorring segregation, we shall love the segregationist. This is the only way to create the beloved community.”

One expression of agape love in Dr. King’s Beloved Community is justice, not for any one oppressed group, but for all people. As Dr. King often said, “Injustice anywhere is a threat to justice everywhere.” He felt that justice could not be parceled out to individuals or groups, but was the birthright of every human being in the Beloved Community. I have fought too long hard against segregated public accommodations to end up segregating my moral concerns,” he said. “Justice is indivisible.”

In a July 13, 1966 article in Christian Century Magazine, Dr. King affirmed the ultimate goal inherent in the quest for the Beloved Community: “I do not think of political power as an end. Neither do I think of economic power as an end. They are ingredients in the objective that we seek in life. And I think that the end of that objective is a truly brotherly society, the creation of the beloved community”

In keeping with Dr. King’s teachings, The King Center embraces the conviction that the Beloved Community can be achieved through an unshakable commitment to nonviolence. We urge you to study Dr. King’s six principles and six steps of nonviolence and make them a way of life in your personal relationships, as well as a method for resolving social, economic and political conflicts, reconciling adversaries, and advancing social change in your community, nation, and world.