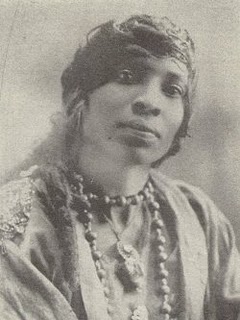 The mysteriously named Madame Sul-Te-Wan was the first Black actress to land a Hollywood studio contract.

Madame Sul-Te-Wan (Nellie Conley) –  (1873-1959), was one of the most prominent Black actresses during the silent film era. “Nellie Wan, a Black vaudeville actress from Louisville who adopted the moniker when she transitioned to film in the mid-1910s

“We never did discover the origin of her name. No one was bold enough to ask.” – Actress Lillian Gish.

Madame Sul-Te-Wan career expanded for more than seven decades. Ms. Sul-Te-Wan was the first Black actor contracted to a film, appearing in an unaccredited role in D.W. Griffith’s Birth of a Nation in 1915. She appeared in dozens of films, limited to portraying characters who were maids, “Mammys” ‘or criminals, which was typical for Black actresses at that time. In the Black classic, Carmen Jones, played Hagar, the grandmother of Dorothy Dandridge’s character. Ms. Sul-Te-Wan performance was so convincing that many thought that she was Ms. Dandridge’s grandmother.

Madame Sul-Te-Wan became the first Black actress to land a studio contract, carving out a place for herself in the emerging Hollywood scene. 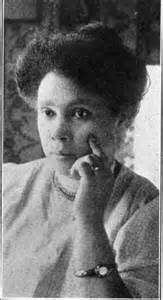 Madame Sul-Te-Wan’s interest in performing was awakened when she delivered laundry to Louisville’s Buckingham Theater where the white actresses who were her mother’s customers often invited young Nellie in to watch the shows.  Two white actresses, Mary Anderson and Fanny Davenport wrangled an audition for her at a talent contest at the Buckingham which the youngster won.  Although Ms. Sul-Te-Wan never gets the recognition she deserves, she’s definitely one of the pioneers who paved the way for Black actresses today.”

Born in Louisville, Kentucky in 1873, she was the child of free slaves, she first became interested in acting while her mother worked as a laundress and she saw young actresses rehearsing their lines. Wanting to pursue her interest, she moved to Cincinnati, Ohio, and joined the Three Black Cloaks Company, where she started her own theatre company and began touring the East Coast. She began working under the stage name “Creole Nell.” She would later form her own troupes – The Black Four Hundred, who employed 16 performers and 12 musicians, and the Rare Black Minstrels, who successfully toured the East coast Negro vaudeville circuit. Her touring took her to California, where she auditioned to be in the movies – a hard feat for any African American to accomplish at the beginning of the twentieth century. Still, she persisted and her film debut was in the silent movie The Cause of It All as “Mary, the Hotel Cook.”

Her next films became classics of the silent era but left a legacy. She picked up an unaccredited role in D. W. Griffith’s The Birth of a Nation as a “Black woman” who taunted Dr. Cameron. She was the only African American in the cast of that movie. It is hard to point her out amongst a field of blackface white actors playing racial stereotypes with racist characterizations. Griffith was so impressed he hired her on the spot, paying her $3 a day. After only one day’s work, he bumped her rate up to $5 a day and would soon sign her to a contract that paid $25 a week whether she did any acting or not.

{“When the film was complete, Madam Sul-Te-Wan was discharged from Griffiths’ film company for “allegedly stealing a book from a white actress and inciting blacks to protest the film’s showing in the Los Angeles area.}

{Hiring prominent African American attorney E. Burton Ceruti, she successfully defended herself against the charges and was reinstated in the company.”}

“It was a highly unusual move for Griffith, who preferred black roles be played by white actors in blackface, and it’s one of the great ironies in film history that the first black woman to be hired as a stock player in Hollywood would feature in perhaps the most baldly racist movie Hollywood ever produced: one in which the last act sees the Ku Klux Klan galloping to defeat a mob of “crazed Negroes.”

Her next unaccredited role was in D.W. Griffith’s Intolerance: Love’s Struggle Throughout The Ages as Girl at Marriage Market in the Babylonian Story. Following her work with Griffith, she appeared in The Children Pay with Lillian Gish and 1917’s Stage Struck with Dorothy Gish. 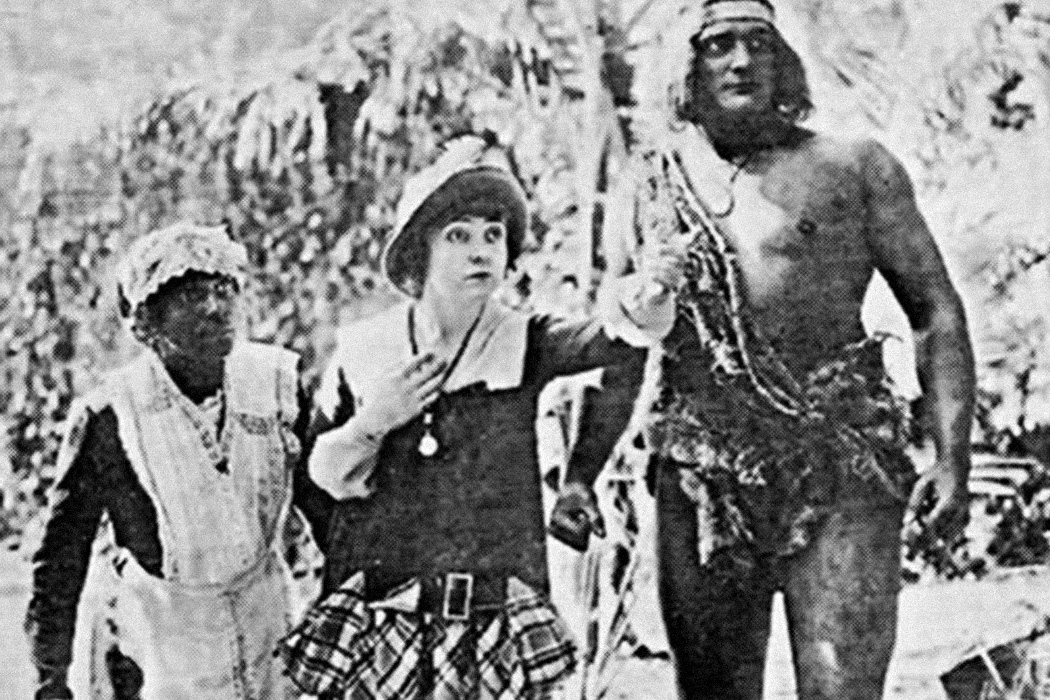 The rest of the decade just had more unaccredited roles for her, but Wan still took them, even into the next decade. Outside of playing the cook, maid, or slave, Madame Sul-Te-Wan played a Prison Inmate in Manslaughter with Thomas Meighan. Wan also appeared in 1927’s Uncle Tom’s Cabin. 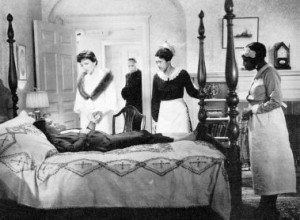 Madame Sul-Te-Wan, aka Mammy Beulah, multitasking housekeeper, and zombie minder, serves a life sentence for possessing a dangerous weapon (her face). “I’ll take care of her like I take care of all of ’em.”

“Her only credited performance of the ’20s was “Mammy” in The Lightning Rider in 1924 and Easter in 1925’s The Narrow Street. Her work in the 20s, though playing supportive roles, allowed her to work for and with Cecil B. DeMille, Tom Dix, Leatirce Joy, Matt Moore, Mildred Harris, Harry Carey, Robert Marsh, and Mae Marsh.

Her most memorable performances at the end of the decade were in 1927’s College with Buster Keaton and in 1929’s Queen Kelly starring Gloria Swanson and directed by Erich von Stroheim as Kali Sana. Nothing was looking up for Madame Sul-Te-Wan, but she transitioned to talkies with ease and was the first African American actress to do so successfully, even if the pickings were slim regarding opportunities. 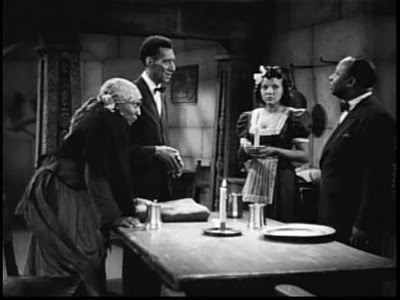 The Land of Cerpts and Honey

Wan continued to appear in high-profile films as a supporting actress, and worked with Frederic March with Sarah And Son in 1930; Voodoo Sue in Heaven on Earth with Lew Ayres and Anita Louise in 1931; Barbara Stanwyck in Ladies They Talk About in 1933 and Native Handmaiden in King Kong with Fay Wray; Black Cook in 1934’s Imitation Of Life with Claudette Colbert, Louise Beavers, and Fredi Washington; Imitation of Life 1934 (The Original) with Louise Beavers, Claudette Colbert, and Madame Sul-te-Wan.  So Red The Rose in 1935 with Margaret Sullivan; Hattie in 1937’s In Old Chicago with Alice Brady, Don Ameche, and Tyrone Power, to name a few.

“Unlike so many silent-era players, Madame Sul-Te-Wan successfully made the transition to sound,, albeit playing one-dimensional, stereotypical characters who tended to appear in the script as occupations rather than names .“ 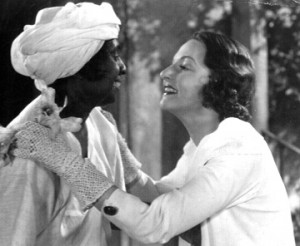 After twenty years in movies, she got her “big break” as Tituba in 1937’s Maid of Salem with Claudette Colbert, Gale Sondergaard, Louise Dresser, and Fred MacMurray. 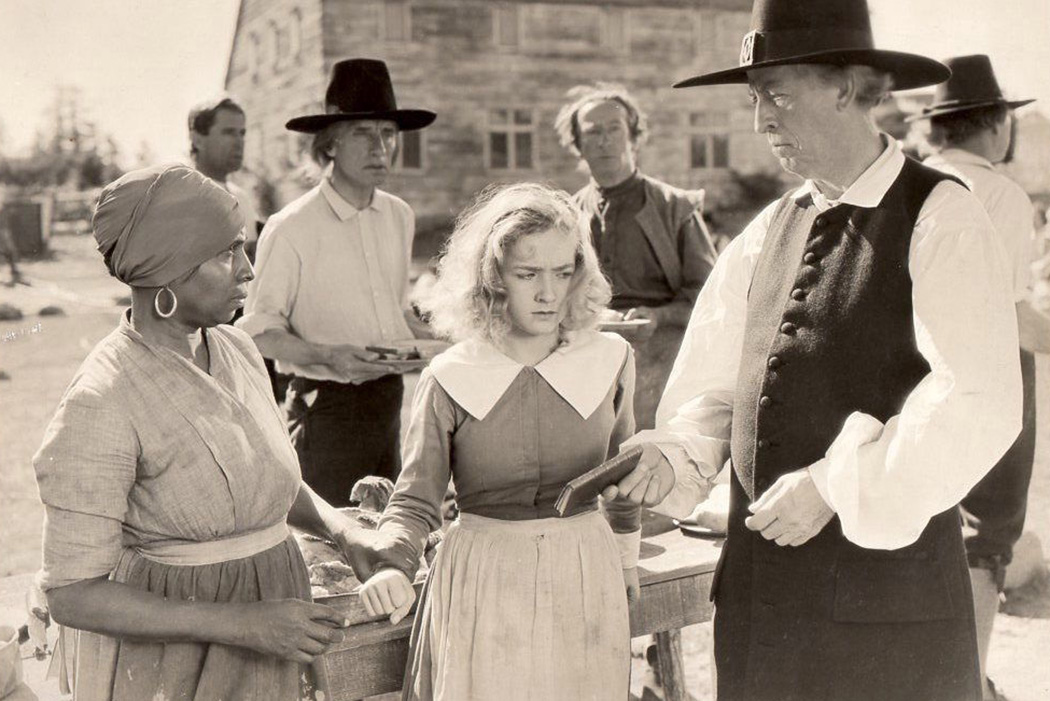 It was back to the back door as “Scrubwoman” in Island In The Sky with Gloria Stuart, “Eve, a Black Servant” in 1938’s The Toy Wife with Luise Rainer and Melvyn Douglas, Benzedrina in The Affairs Of Annabel with Lucille Ball, and Lily in Kentucky with Loretta Young and Walter Brennan. She finished the decade working with Jane Wyman in Torchy Blane… playing With Dynamite as Ruby, a convict.

The forties showed no change from the twenties, outside of names for maids, convicts, and voodoo queens. The highlights of her work of that decade include Maryland in 1940 with Fay Bainter, Walter Brennan, and the recent Oscar winner Hattie McDaniel; 1941’s Sullivan’s Travels with Joel McCrea and Veronica Lake, playing a church harmonium player; and 1942’s Mokey with Donna Reed and Robert Blake playing Miss Cully.

She appeared in a few underground camp classics also. Back then any work was good for the African American actor and actress, so long as it worked. And for Madame Sul-Te-Wan, whether it was a maid, a convict, a voodoo queen, an old black woman, or any sort of token supporting performance, it still worked. When the fifties came around, after forty years in film, Madame Sul-Te-Wan got a speaking role as Hagar- Carmen’s Grandmother in 1954’s Carmen Jones alongside Dorothy Dandridge, Harry Belafonte, and Diahann Carroll. Even though she was on the screen for about five minutes, she was finally speaking and on-screen long enough to let people know who she was. Her chemistry with Dorothy Dandridge fueled the rumor that she was, in fact, Dandridge’s actual grandmother, but that is not true.

Her last few films were reminiscent of her early work, as they’re still was no such thing as a break-off point for the African American actor in Hollywood. Her last film was The Buccaneer in 1958 with Anthony Quinn, Charlton Heston, and Yul Brynner. At the age of eighty-five, she died of a stroke the following year.

Birth of In an age when film roles for African Americans were limited, Madame was consistently employed in the industry as stereotypical characters. . Her last role was the charm vendor in The Buccaneer (1958). a Nation,” (1915), (unaccredited), and “A Black Woman.” 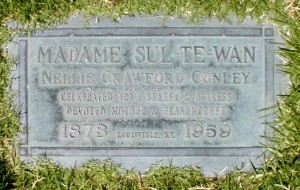