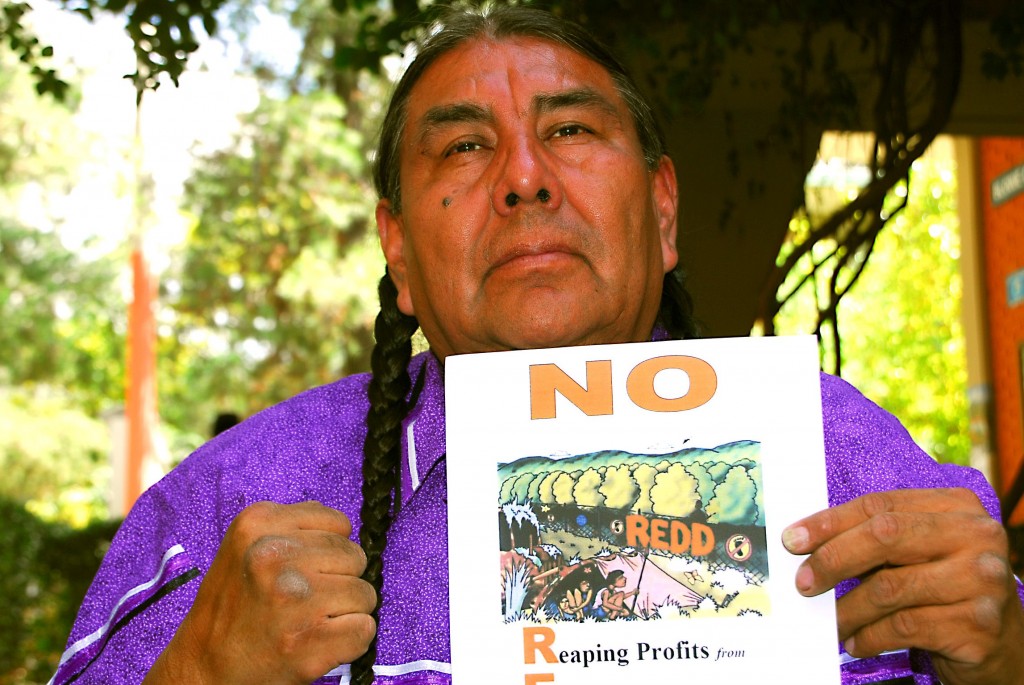 Tom Goldtooth is executive director of the Indigenous Environmental Network headquartered at Bemidji, Minnesota. For over thirty years, he has been an environmental and economic justice leader in the Native American community. He has spoken about the congressional climate change bill and Native American efforts to address the resource extractions causing environmental degradation in their communities.  He was a was a student at Arizona State University in 1971.  He was born in 1956.

As Executive Director of the Indigenous Environmental Network, Tom Goldtooth has built an organization of 250 indigenous communities focused on climate justice, energy, toxics, water, globalization and trade, and sustainable development. A prominent spokesman on environmental justice issues, he was honored in 2010 by the Sierra Club and the NAACP as a “Green Hero of Color.” Tom Goldtooth is also known for co-producing an award winning documentary film, Drumbeat for Mother Earth, which details the effects of bio-accumulative chemicals on indigenous communities.

Goldtooth has guided the growth of the Indigenous Environmental Network from a national to a continental to a global alliance. He has represented the rights of native peoples at the international level through UN treaty making bodies and conventions on persistent organic pollutants, global warming, biodiversity protection, mineral extraction, and water resources. 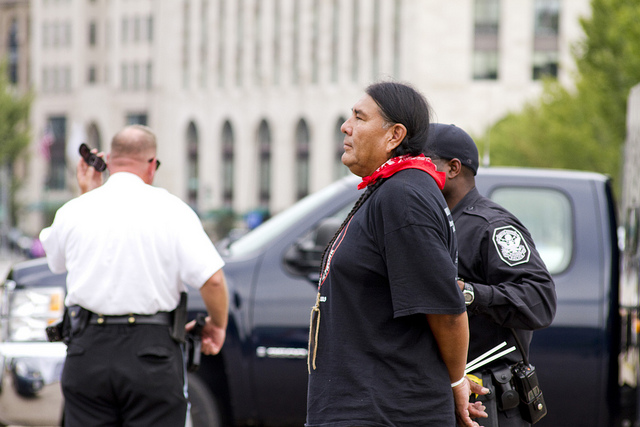 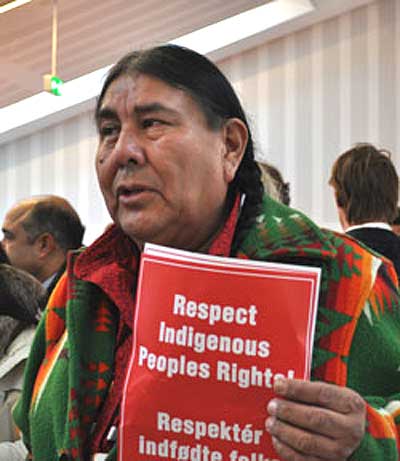 Goldtooth speaks on environmental justice, especially with regard to the indigenous peoples of the world, both as injured parties and as sources of corrective wisdom for the planet’s ecological dilemmas. 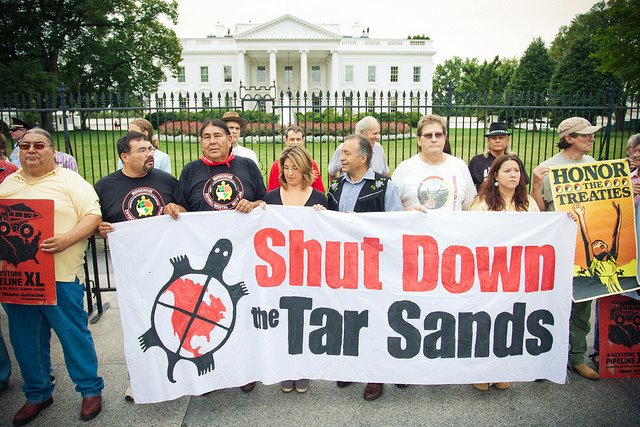 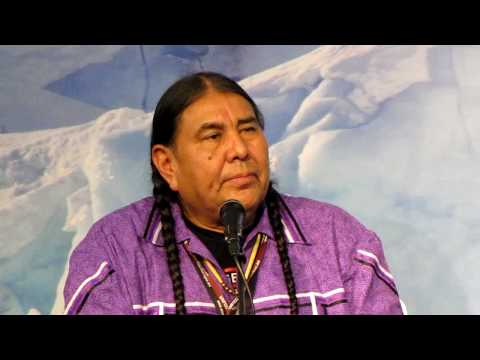 Established in 1990 within the United States, IEN was formed by grassroots Indigenous peoples and individuals to protect the environmental, cultural, social, and human rights of Indigenous Peoples. IEN’s activities include building the capacity of Indigenous communities and tribal governments to develop mechanisms to protect their sacred sites, land, water, air, natural resources, health of both Indigenous people and all living things, and to build economically sustainable communities. IEN accomplishes this by maintaining an informational clearinghouse, organizing campaigns, direct actions and public awareness, building the capacity of community and tribes to address EJ(Economic Justice) issues, development of initiatives to impact policy, and building alliances among Indigenous communities, tribes, inter-tribal and Indigenous organizations, people-of-color/ethnic organizations, faith-based and women groups, youth, labor, environmental organizations and others. IEN convenes local, regional and national meetings on environmental and economic justice issues, and provides support, resources and referral to Indigenous communities and youth throughout primarily North America – and in recent years – globally. 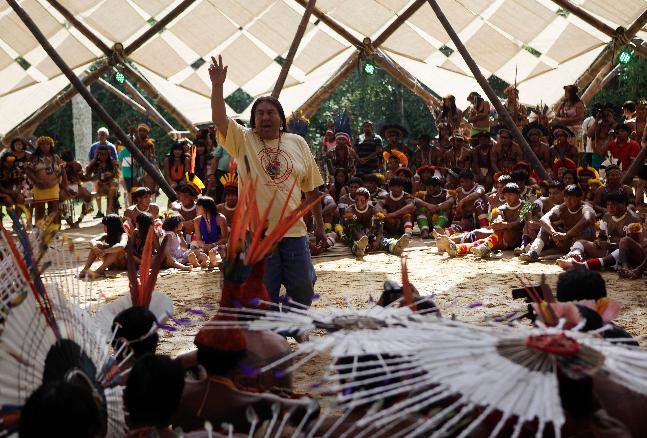 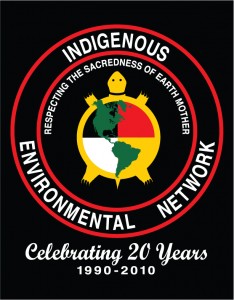 Like all great movements, the Native environmental justice movement, and in essence IEN, was born of desire, need and struggle. IEN’s desire in particular, springs from our love for Mother Earth and our connection to all of creation. The need for IEN grew from the wounds inflicted upon the earth from the collective greed of humanity.

IEN was born in 1990 from a national gathering of tribal grassroots youth and Indigenous leadership to discuss our common experiences regarding environmental assaults on our lands, waters, communities and villages. At that time, a significant number of our tribal communities and villages were targeted for large toxic municipal and hazardous waste dumps and nuclear waste storage facilities and with industrial and mineral development in Indian country literally leaking and oozing out of the ground with toxic poisons. Organizing around environmental issues was relatively new to many of the tribal grassroots members and their tribal governments in the early 90’s.

Following the 1990 gathering, Indigenous activists, youth and concerned tribal community members continued to meet year after year in various locations in the U.S. to put our minds, heart and spirit together for a common course of action as a means to restore our homelands to environmental health and harmony. From these initial gatherings the idea of IEN was born — an idea born of hope, courage and common vision.

In the years that followed, the idea for IEN continued to flourish, as these annual gatherings became an excellent organizing and education venue to reach out to Indigenous peoples throughout North America. These annual gatherings became known as Protecting Mother Earth Gatherings and in this spirit; the foundation of IEN’s work was built. The IEN annual conference gatherings have demonstrated the ability to educate, train, and develop needed dialogue and strategy development around environmental justice issues affecting Indigenous peoples and our lands. Our annual gatherings have been held at different regional locations around the country, including Alaska and have become a vast coalition building effort connecting indigenous communities throughout the Americas and the world. The 12th Protecting Mother Earth Gathering in Penticton, British Columbia, Canada, August 2001, was the first held in Canada. That was the last gathering, with the next gathering planned for June 2004 near the sacred Bear Butte in South Dakota.

IEN begin to hire staff starting in 1995. From 1995 to present, IEN’s staff, its governing body and community-based advisors devoted an incredible amount of effort to develop the capacity of IEN to meet its growing responsibility to serve both tribal grassroots communities and tribal governmental environmental staff on environmental justice issues.

IEN has supported many communities with technical information, assisted in environmental campaign strategy, and has fulfilled its mandate to be a vehicle to provide a voice and to be the “eyes and ears” of tribal grassroots, traditional leadership and small disenfranchised tribes and Alaska villages on environmental justice issues.

The experience of IEN grows each year. We continue to learn to develop and support a national and international network that maintains an Indigenous peoples and youth constituency with a grassroots focus. IEN has become a mechanism that opens constructive dialogue between tribal members, youth and their tribal governments as a means to strengthen tribal sovereignty and jurisdiction on environmental justice and sacred site issues.

MISSION, PRINCIPLES AND CODE OF ETHICS

In 1991, near the sacred Bear Butte in South Dakota, near 500 Native people came together at the outdoor 2nd Annual IEN Protecting Mother Earth gathering. At this gathering, this Unifying Principle and the Environmental Code of Ethics were written.

The Indigenous Peoples of the Americas have lived for over 500 years in confrontation with an immigrant society that holds an opposing world view. As a result we are now facing an environmental crisis which threatens the survival of all natural life.

In 1991, near the sacred Bear Butte in South Dakota, near 500 Native people came together at the outdoor 2nd Annual IEN Protecting Mother Earth gathering. At this gathering, this Unifying Principle and the Environmental Code of Ethics were written.

The Indigenous Peoples of the Americas have lived for over 500 years in confrontation with an immigrant society that holds an opposing world view. As a result we are now facing an environmental crisis which threatens the survival of all natural life.

We believe in unified action, sharing of information, and working together with mutual respect. We recognize we must assert our sovereignty and jurisdictional rights through the application of our traditional laws and recognizing our traditional forms of leadership of our indigenous nations. We stand on principles of empowering and supporting each other to take direct, informed action and affect our ability to protect our lands from contamination and exploitation. By attempting to fulfill our responsibility to defend our mother earth we are assuring the survival of our unborn generations.

The members of IEN are unified in our recognition that the traditional teachings, lifestyles, spirituality, cultures and leadership of our people as well as the survival of our future generations, are entirely dependent upon our respectful relationship with the natural world and our responsibility to the sacred principles given to us by the creator.

Compiled by the INDIGENOUS ENVIRONMENTAL NETWORK

Many scientists and tribal people consider persistent toxic chemicals to be the greatest threat to the long-term survival of Indigenous Peoples. “Drumbeat for Mother Earth” explores how these chemicals contaminate the traditional food web, violate treaty rights, travel long distances, and are passed from one generation to the next during pregnancy causing cancer, learning disabilities, and other serious health problems.

Indigenous Peoples’ connection to Mother Earth places them on a collision course with these chemicals. Continued survival within a contaminated environment means making life and death decisions that could alter whole cultures, diets, ceremonies and future generations.

Currently, the United Nations is negotiating a worldwide treaty on a group of 12 of these chemicals that includes PCBs, DDT, and dioxin. The UN involvement reflects the ability of these chemicals to travel long distances across international borders. Unfortunately, the official U.S. position does not support elimination of these compounds. Many tribal people consider this to be a continuation of the government’s genocidal history.

The video features testimony from a variety of Indigenous Nations in the U.S., Central America, and the Arctic as well as interviews with scientists, activists and the chemical industry.

This video is also available in a Spanish version.

“A must-see for anyone concerned about the effect of these common chemicals on our waters, in the air we breathe, and in the food that we all share…A very compelling story which should be viewed by every caring and thinking soul.”

“Recommended for academic libraries with nonprint collections in environmental issues.”

“Sure to provoke critical thinking and good discussion.” 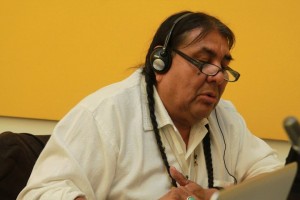