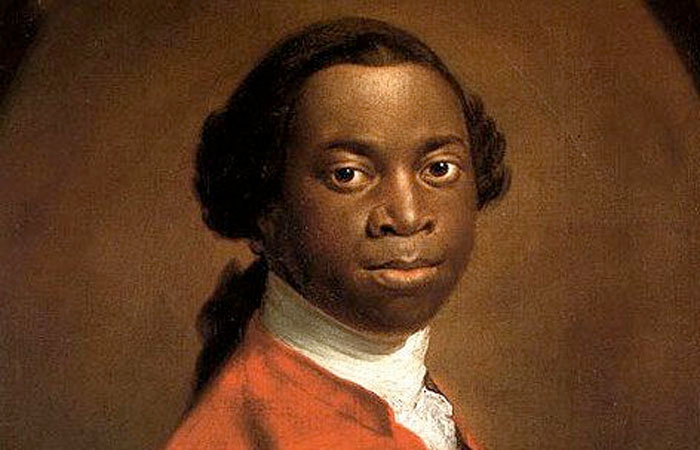 Born in Essaka, an Igbo village in West Africa in 1745 was  also was said to be born in Eboe, in what is now Nigeria. He was the son of a chief. Had 5 brothers and a sister, he was the youngest son with one younger sister. He was kidnapped along with his sister by two men and a woman, African kinsmen, and sold to native slaveholders while their parents were out. Equiano was 11 when he was kidnapped. He was one of the 50 thousand Africans sent to the Americas in 1756 and was one of 245 enslaved Africans on the ship. He was captured and sold in Benin, and was placed on a slave ship bound for Barbados afterwards. He was sold and traded several times during the six or seven months of his journey to the Atlantic coast.

After being unloaded in Barbados, Equiano was not purchased so he went on to Virginia where a tobacco planter put him to work among black people wearing instruments of torture as punishment. After this, he was bought by Lieutenant Michael Pascal, a lieutenant in the Royal Navy. Pascal gave him the name Gustavus Vassa. The original Gustavus Vassa was a sixteenth-century Swedish nobleman who had led the Swedish people into a war of independence from the Danes and as a result had become the first Swedish king of the Swedish people. He was thus seen as the man who had led the Swedes out of a sort of slavery. Equiano had also been renamed before, Michael on the slave ship, and Jacob by his first owner. Because Pascal was a lieutenant in the Royal Navy, Equiano received training in seamanship and got to travel extensively with his master.

During the Seven Years War, Equiano helped haul gunpowder to the gun decks. Equiano was one of Pascal’s favorites, so Pascal sent him to his sister in law in Britain to attend school and learn how to read. Equiano also decided to convert to Christianity at this time and Pascal allowed him to be baptized in St. Margaret’s, Westminster in February 1759. However, after the war Equiano was not released from slavery even though Pascal had promised him such. Equiano also did not receive a share of the prize money as was rewarded to the other sailors.

Pascal sold Equiano to Captain James Doran of the “Charming Sally” at Gravesend, where he was transported to Montserrat, in the Caribbean Leeward stands. He was then sold to Robert King, a Quaker Merchant from Philadelphia who traded in the Caribbean. King sent Equiano to work on his shipping routes and in his stores. In 1765, King promised that for 40 pounds, the price he had paid for Equiano, that Equiano could buy his freedom. King taught him to read and write more fluently, guided him along the path of religion, and allowed Equiano to engage in profitable trading on his own as well as on his master’s behalf. King wanted Equiano to be his business partner after Equiano had achieved his freedom (in his early twenties) but Equiano thought this would be too dangerous in the British colonies as a freedman, so he returned to Britain.

Equiano was enslaved for ten years.