FRANK ESPADA has been a grassroots organizer and political activist for many years. He was a founding organizer of the National Welfare Rights Organization, the National Latino Media Coalition, the National Hispanic Manpower Association, and the National Association of Puerto Rican Drug Abuse Programs, among others. He has served as Executive Vice President of the New York Urban Coalition and as Deputy Commissioner of the Community Development Agency in New York City.

He has been a photographer for over 50 years, having studied at the New York Institute of Photography and with Gene Smith in the late 1950s.

In 1979, Frank received a grant from the National Endowment for the Humanities for his “Puerto Rican Diaspora Documentary Project”, which took him all over the country documenting the Puerto Rican migratory experience in 34 locations in the mainland, Hawaii, and Puerto Rico. The resulting exhibit was shown in 45 venues over a 15-year period. A book of this work, The Puerto Rican Diaspora: Themes in the Survival of a People was published in 2006. The book has received numerous book design and printing awards since its publication.

Frank and his family moved to San Francisco in 1985, where he taught at various educational institutions and held private workshops for 20 years.

AWARDS AND HONORS
Recognition
• In 2008, “in recognition of his distinguished record of personal and professional accomplishments and service to society” Frank was awarded a Doctor of Arts degree from Lehman College in the Bronx, New York.
• In May 2009, the Library of Congress purchased a collection of 83 vintage prints from the “Puerto Rican Diaspora” project.
• In 2010, Duke University proposed to develop an archive of Frank’s lifetime work. View the press release.

Exhibits
The great majority of Frank’s exhibits were the result of the documentary project. However, some of them encompassed a broader selection of his work. Amongst these were the exhibits at the Charles Allis Art Museum in Milwaukee; at the Reading (Pennsylvania) Public Museum; at Honolulu Hale; the Museum of Art in Chicago; the Museo del Barrio in New York City; and at Museo de Arte de Ponce, in Puerto Rico. All of these were from 1982 to 1985.

Other Projects
In late 1950s Frank worked as a volunteer at The Fountain House Foundation, a half-way house for mental institution patients in New York City. He documented their work extensively, including group and individual sessions, as well as the steps which led to re-integration into the community. The images were used for fundraising purposes.

In 1990, he worked with the Mid-City Coalition for HIV prevention in San Francisco, documenting the work of their community health organizers. The resulting essay was exhibited at AIDS Update Conferences nationally. In 1992, he photographed the Chamorro communities in Micronesia, primarily in Guam, Tinian, and Saipan, struggling for separation from the American hegemony. The documentary was exhibited in Guam and several other locations, including Guadalajara, Mexico. 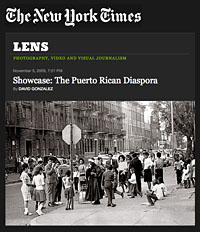