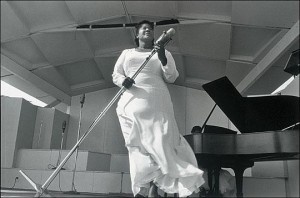 Born:  October 26, 1911 as Mahala Jackson, later changed to Mahalia Jackson in 1931. Mahalia was the third child to John A. Jackson, a barber and preacher, and Charity Clark. Mahalia Jackson grew up in a shotgun home shared by 13 people. Raised by her Aunt Duke after her mother died in 1917, economic circumstances forced Jackson to quit school and work at home when she was in fourth grade. When she was born Halie suffered from genu varum, or “bowed legs”. The doctors wanted to perform surgery by breaking Halie’s legs, but one of the resident aunts opposed it. Halie’s mother would rub her legs down with greasy dishwater. The condition never stopped young Halie from performing her dance steps for the white woman her mother and Aunt Bell cleaned house for. Jackson found her greatest inspiration at Mt. Moriah Baptist Church, where she sang on Wednesday, Friday, and four times on Sunday. Even at age 12, her powerful voice could be heard all the way to the end of the block.  You going to be famous in this world and walk with kings and queens,” said her Aunt Bell, predicting an illustrious future for a voice that would change the face of American music, empower the Civil Rights movement, and bring Mahalia Jackson worldwide renown. Her father’s sister, Jeanette Jackson-Burnett, and husband, Josie, were vaudeville entertainers. 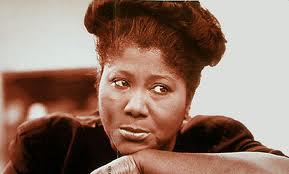 The influence from her aunt and uncle gave Mahalia a desire to become more involved in the arts and the theatre. Each performance was made up of a series of separate, unrelated acts grouped together on a common bill. Types of acts included popular and classical musicians, dancers, comedians, trained animals, magicians, female and male impersonators, acrobats, illustrated songs, jugglers, one-act plays or scenes from plays, athletes, lecturing celebrities, minstrels, and movies. In 1927, at the age of sixteen, Jackson moved from the south to Chicago, Illinois, in the midst of the Great Migration. After her first Sunday church service, where she had given an impromptu performance of her favorite song, “Hand Me Down My Silver Trumpet, Gabriel”, she was invited to join the Greater Salem Baptist Church Choir. She began touring the city’s churches and surrounding areas with the Johnson Gospel Singers, one of the earliest professional gospel groups.

In 1936, Jackson married Isaac Lanes Grey Hockenhull (“Ike”), a graduate of Fisk University and Tuskegee Institute, who was 10 years her senior. She divorced Isaac in 1941 because of his unrelenting pressure on her to sing secular music and his addiction to gambling on racehorses.

1937: God’s Gonna Separate The Wheat From The Tares, My Lord, Keep Me Everyday, God Shall Wipe All Tears Away