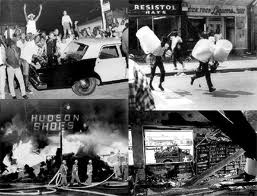 Prior to the Watts Riot, in Los Angeles and other parts of the country, Black men were viewed as threatening figures and people who committed crimes. Although segregation was over it was a “open secret” that police officers were to keep people (Blacks) in the right place at the right time.  Blacks were not supposed to cross Alameda Blvd. Social barriers were intentionally created. Those that crossed those barriers were harassed and penalized by the police. The idea was to create a segregated society. 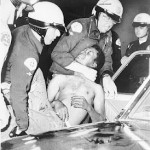 At 7 pm on August 11th Marquette Frye, a 21 year old black man, was pulled over for suspicion of driving while under the influence. After being convinced that Frye was intoxicated, the officers insisted on impounding his car when he was only two blocks from home. As the officers took what they called necessary actions a growing crowed of 20 to 50 people stood by and watched what was happening. Once Frye’s mother and brother, Rena and Ronald, joined the on-growing crowd, the people became belligerent and hostile, which caused for the officers to call for reinforcements. As the reinforcements came a fight broke out between the angry crowd and the police officers. Along with his mother and brother, Frye was arrested and taken into custody. By 7:25 that night there were over 1000 Watts residents at the scene.

As officers were leaving the crowd, someone in the crowd spit on one of the officers. Two officers proceeded into the crowd and randomly arrested a Black man and Black woman. During the arrest of the woman she was said to have been encouraging the crowd to violence. As the last police car left the scene it was stoned down. By 1:00 the next morning there were 29 arrests. On Thursday evening at 2:00 the Los Angeles County Human Relations Commission held a meeting at the request of county officials in an auditorium at Athens Park, which was 11 blocks from the place where Marquette Frye’s arrest took place. Even Mrs. Frye was at the meeting and said “help me and others calm this situation down so that we will not have a riot tonight.” But after that a Black high school student ran to the microphone saying that the rioters would run and attack white areas that evening.