“The Whitman Sisters were the highest paid act on the Negro Vaudeville Circuit, Theater Owner Booking Association (Toby), and one of the longest surviving touring companies (1899-1942). The group was considered the greatest incubator of dancing talent for Negro shows on or off Toby, and significantly contributed to American theater and dance history. In The Royalty of Negro Vaudeville, Nadine George-Graves provides a historical narrative of their achievements and uses Black feminist theories, feminist theories of performance, and theories of class and popular culture to analyze the many layers of performance in which the Whitman Sisters participated, on and off the stage. She shows that these four Black women manipulated their race, gender, and class to resist hegemonic forces while achieving success. By maintaining a high-class image, they were able to challenge the fictions of racial and gender identity.”

“So completely has evidence of the Whitman Sisters disappeared that it’s almost as if someone had deliberately cut them out of the pages of show business history. Yet for forty years from the late 1890s to the late 1930s, the Whitman Sisters shows were the biggest, fastest, flashiest shows in black vaudeville. Their annual touring show became an incubator for talent—especially dancers. The kids who started in their shows or joined them later became some of America’s favorite comics, dancers, and musicians a few years later: Eddie “Rochester” Anderson, Count Basie, Trixie Smith, Moms Mabley, Jeni LeGon, Reed & Bryant. Pine Top Smith, Lonnie Johnson, and Mary Lou Williams.”

“There were four Williams Sisters: Mabel/May who ran the company and directed the show, Essie who was a big-voiced comic-singer, and Alberta/Bert who was a flash dancer who worked in male drag. Alice, much younger than her sisters, was regarded by many as the greatest woman tap dancer of her day.

They were fearless, talented, and had a great sense of business.  May ran the company like a strict schoolmaster and the kids in their care were trained and worked hard, fed and clothed well, sent to church on Sundays, and were prevented from engaging in any hanky-panky.

Despite their achievements of fielding shows year after year, of making news by integrating an audience as early as 1904, of being billed as the “Royalty of Negro Vaudeville,” of retiring wealthy to Chicago, the four Whitman Sisters are forgotten and only a few photos seem to exist.”

Stage Name – Whitman Sisters: considered the royalty of Black vaudeville entertainment from 1900 to 1943. Introduced the cakewalk in 1908.” 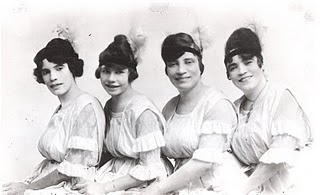 “The sisters grew up in a religious home with their father as a minister and sang Jubilees at church. When they were young they arranged shows for their church which gave them experience when it came to producing later on in life. They would tour at a young age, singing and dancing in various church functions and vaudeville shows with their mother in tow as chaperones.  They finally started their own act,  The Whitman Sisters New Orleans Troubadours around 1903 Which consisted of Alberta, Mabel, and Essie; Alice would join them after their mother died in 1909.” 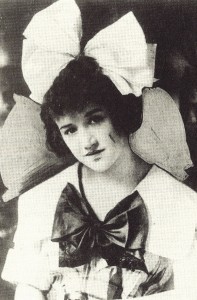 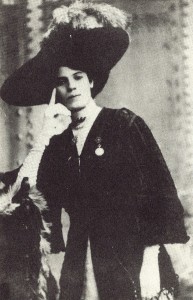