Albery Allson Whitman was born into slavery in Hart County, KY, on the Green River Plantation. Albery was the husband of Caddie Whitman (1857-1909), who was also from Kentucky. Albery was a poet and a Bishop of the Methodist Church. He was a graduate of Wilberforce College (now Wilberforce University) and served as Dean of Morris Brown College in Atlanta.

His talent as a Negro poet has been described as between Phillis Wheatley and Paul L. Dunbar.

Albery A. Whitman was also the father of musician Caswell W. Whitman (1875-1936) and The Whitman Sisters, one of the most successful vaudeville troupes in the U.S. Albery taught his older daughters to dance when they were children, and for a brief period, they were managed by their mother, Caddie. The Whitman troupe first toured Kentucky in 1904. The Whitman Sisters were Mabel (1880-1962), Essie B. (1882-1963), Alberta (1887-1964), and Alice (1900-1969). Mabel directed the shows, Essie was a comic singer, Alberta was a flash dancer and did male drag, and Alice was an exceptional tap dancer. For more on Albery A. Whitman see Dictionary of American Negro Biography, by R. W. Logan and M. R. Winston; and Albery Allson Whitman (1851-1901), an epic poet of African American and Native American self-determination (thesis), by J. R. Hays. 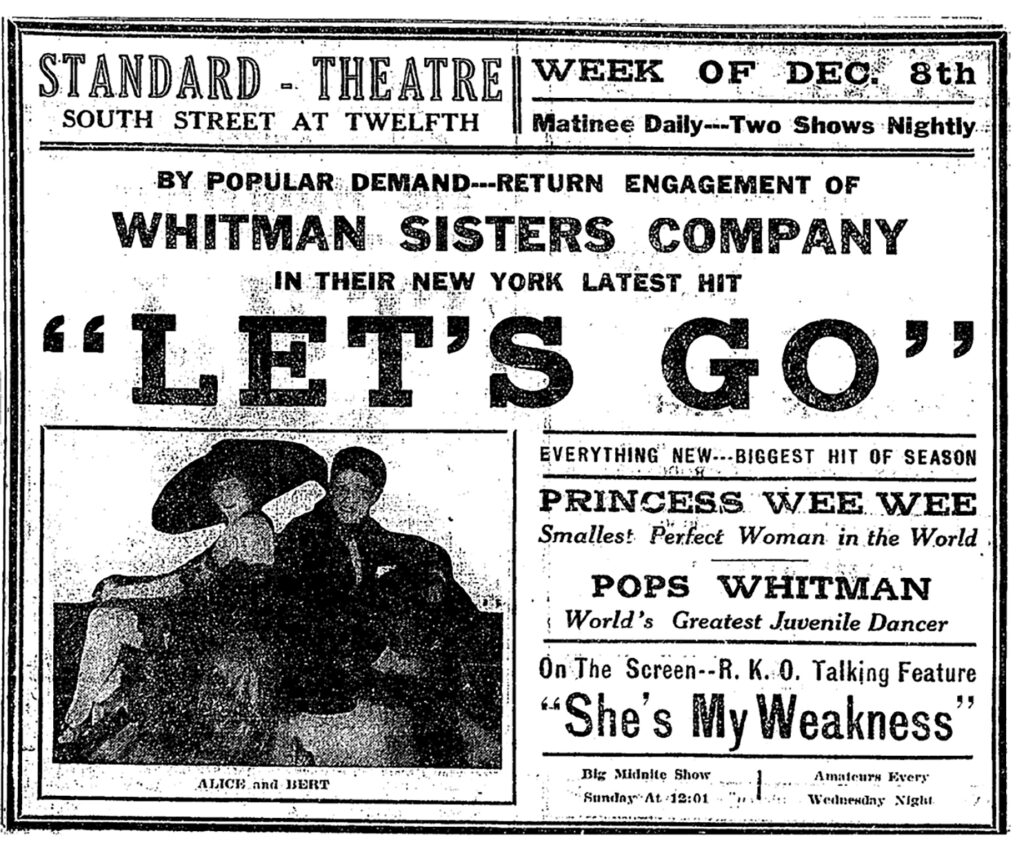 Jeni LeGon began performing across the southern United States with the Whitman Sisters company. In 1933, she and her half-sister, Willa Mae Lane, formed the LeGon and Lane song-and-dance team. 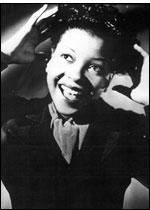 Jeni LeGon played leading roles in a number of Black films, where she claims, “sometimes I even got to be myself,” not a maid or any number of stereotypical roles. She toured widely with US Army shows, and she did club and theater performances nationally and internationally.
In a 1999 documentary by Grant Greshuck, LeGon’s extraordinary devotion to passing on tap dancing is as much a feature of the film as her stardom. Living in a Great Big Way, named for one of her famous numbers with Bill Robinson, is narrated by Fayard Nicholas, who reveres LeGon as a star performer and a gifted teacher who could “do it all.” LeGon says that sees teaching as a natural extension of her performing – “I’ve had a dance school all my life.” One envies those students for whom she clearly and still labors for the love of the form.

Dr. Jeni LeGon was one of the first African American women in tap dance to develop a solo career.  A career, very much on her own terms. In a sea of chorus girls in short skirts and high heels, she was center stage in pants and low-heeled shoes. Her routines combining flash, acrobatics, and rhythm tap proved you didn’t have to be a man to dance like a hoofer. 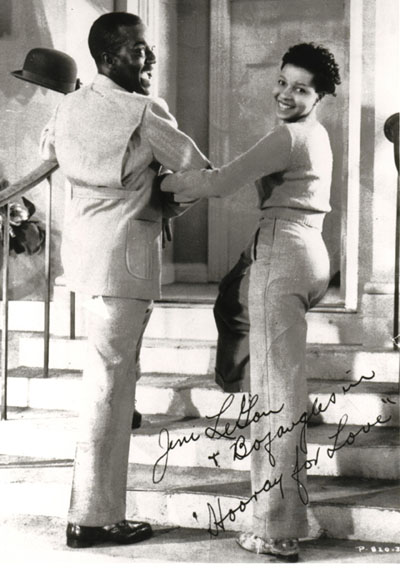 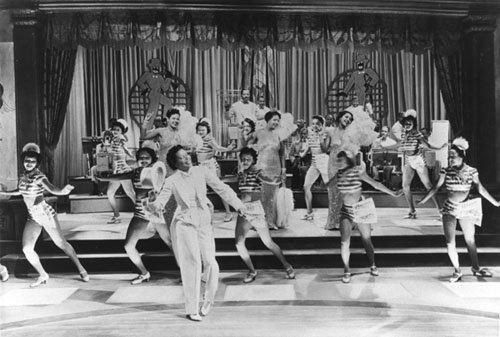 Born in 1916, the fifth child of Harriett and Hector LeGon, she developed her talents on the sidewalks near the  southside of Chicago 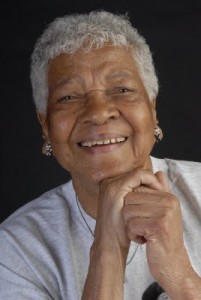 “Born in Chicago, LeGon broke into the business at age 14 as one of the chorines performing at Chicago’s Uptown Theater with the Count Basie band. The budding young tap artist later toured the South with her sister in a troupe called the Whitman Sisters.”  (http://www.tapheritage.org/jeni.htm) 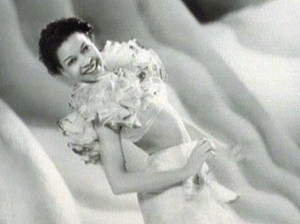 “That association led to an invitation to work in Los Angeles, where LeGon, then 16, was signed by MGM for future film roles. “I was the first black woman to get a long-term contract,” LeGon recalled. But MGM bought out her contract. “I didn’t get the opportunity, I guess because I just wasn’t the girl next door.” Undaunted, LeGon continued to pursue her career, achieving relative success in the theater, in nightclubs, and in a film on both coasts. Her numerous roles would earn her the title “Hollywood’s Chocolate Princess.” Her film credits include “Birth of the Blues” (with Bing Crosby), “Stormy Weather” (with Lena Horne), and “Hooray for Love.” Which starred an early mentor, Bill “Bojangles” Robinson, and also featured the music of Fats Waller.   “Both Bojangles and Fats were just wonderful to me, a brand new little thing like me that just came out of nowhere,” recalled the ebullient LeGon. “They were so encouraging. Fats became one of my closes friends. Of all the people I’ve worked with, he was my favorite. He also wrote two songs especially for me. I played every kind of maid, that’s all I ever did. I was an East Indian, West Indian, African, Arabic, Caribbean, and black American. Eventually, there weren’t that many roles. They were too few and far between. I worked three to four days a week. I had to go out and perform.” At the height of her fame, LeGon became one of the few females to succeed as a tap artist. She says her sex was never a hindrance to her success and counts several male tap acts as her early inspirations, including such fabled performers as the Step Brothers and John and the Five Giants of Rhythm, the tap group that accompanied Count Basie’s big band. “I was that rarity,” LeGon said. “I used to go and watch all of these guys when I went to the stage shows in Chicago. I was one of the only girls allowed in the Hoofer’s Club (in New York), where I used to go and challenge all of those guys.” When LeGon wasn’t singing and dancing on the screen, for nearly two decades she owned and operated her own dance school, Jeni LeGon Dance Studio, in Los Angeles. Her former students include playwright Mickey Grant, author of the hit musical, “Don’t bother Me I Can’t Cope.” And Victor Upshaw, a successful choreographer now living in Paris. LeGon relocated to Vancouver in 1969 and carved out her own niche in the local dance scene there. In 2002, she received a Doctorate of Performing Arts in American Dance with eight other tap legends, Cholly Atkins, Bunny Briggs, Buster Brown, Henry LeTang, Fayard Nicholas, Leonard Reed, Jimmy Slyde, and Prince Spencer.” (http://www.tapheritage.org/jeni.htm)

“Albert “Pops” Whitman, the outstanding swing and acrobatics tap dancer who formed the transition between tap and flash acts of the 1930s and 40s, was born to tap dancer “Baby” Alice Whitman of the famous Whitman Sisters, and class-act tap dancer Aaron Palmer. He made his debut in 1923 at the age of four in a miniature tuxedo, dancing with Whitman Sisters troupe on the T.O.B.A. black vaudeville circuit. By the 1940s, after a series of partners, Whitman formed the tap team of Pops and Louis with Louis Williams, a versatile eccentric dancer with a fine personality. They graduated from T.O.B.A. and went to work with the big swing bands of Jimmie Lunceford, Benny Goodman, and Duke Ellington. Avid improvisers, they were known never to give the same show twice; with Louis coming up with whatever struck his fancy, and Pops topping it on the spur of the moment. “We were a little different from The Nicholas Brothers and the Berry Brothers, who were dancing at the same time,” Louis Williams told Marshall Stearns. “We had a sort of ad-lib song-and-dance act, singing duets together and doing whatever we felt like.” They also played instruments. Tap dancer Leroy Myers remembers that for a while, they even worked as mascots for the NBC-TV Kiddie Hour, “singing and clowning around without hardly any dancing.” They later toured Europe and appeared in the Hollywood film Change of Heart (1943). 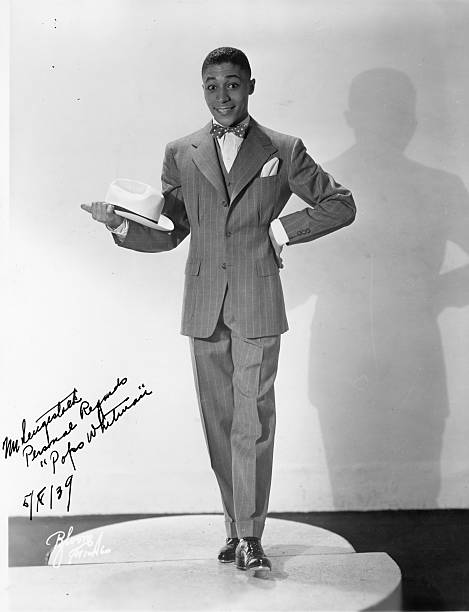 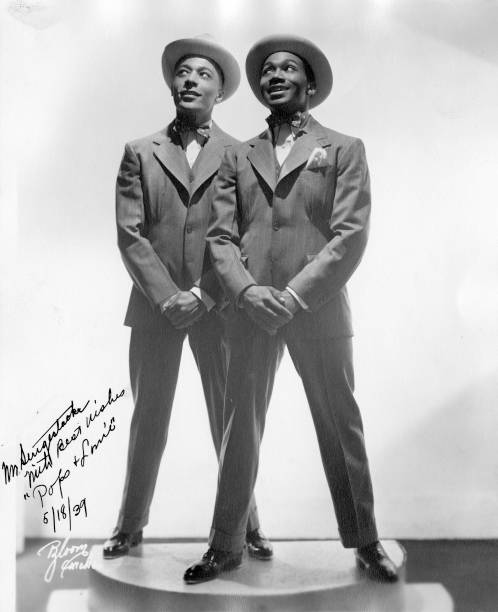 As highly talented showmen who enjoyed every moment onstage, the high point of Pops and Louis’ act was Pops’ flash tap acrobatics; tap dancer Baby Laurence Jackson remembers that was a front-and-back spin that looked effortless but was almost impossible, and a Russian twist that was indescribable: “He [Pops] started spinning like a top and went down into a squat and up, over and over, and each time he came up, he was facing the audience with his ankles locked. In my book, he was the greatest of all the acrobatic tap dancers.” Williams remembers that “Pops was a little king, he was born in a trunk, and he had all the savvy of show business at his fingertips. He was my inspiration. When I saw him, I saw all the dancing there was.” 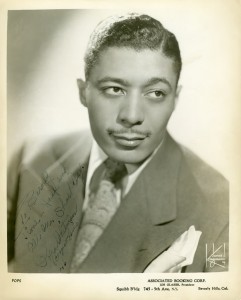 “Pops “Albert” Whitman started dancing at a very early age with his mother Alice Whitman of the famous Whitman sisters. After the death of Mabel, the sisters disbanded and Pops Whitman joined with Louis Williams and toured the country.”

THE WHITMAN SISTERS ARE FORMED

*The Whitman Sisters vaudeville quartet are celebrated on this date in 1900.
They were four Black sisters who were stage stars of 20th century Black Vaudeville. They ran their own performing touring company for over forty years from 1900 to 1943, becoming the longest-running and best-paid act on the T.O.B.A. circuit. The sisters were the daughters of Reverend Albery Allson Whitman and Caddie Whitman (White), who lived in Ohio, Arkansas and Kansas before settling in Atlanta, Georgia. They included Mabel “May”, Essie “Essie Barbara”, Alberta “Bert” and Alice. The sisters had an older brother.
Reverend A. A. Whitman came to be known as the “Poet Laureate of the Negro Race”. The sisters were taught by their father to sing religious songs and to dance, in order to accompany him on evangelical tours. Around 1899, Mabel and Essie began performing as the Danzette Sisters. They were invited to perform in New York by George Walker, but their father and manager insisted that they stay to finish their education, and the sisters continued performing in the south.
After their father died in 1901, Mabel, Essie and Alberta formed the Whitman Sisters’ Novelty Act Company in Augusta, Georgia, and the twelve-strong Whitman Sisters’ New Orleans Troubadours in 1904. The sisters were light-complexioned, their mother was white, and they were occasionally obliged to perform in blackface. They were described as “bright, pretty Mulatto girls” with “wonderful voices”. Alberta (“Bert”) performed regularly as a male impersonator.
They moved their base to Chicago in 1905, and the youngest sister, Alice, joined the company around 1910. Mabel Whitman managed the company after her mother’s death in 1909, and in 1910 organized Mabel Whitman and the Dixie Boys, and toured the US and (reputedly) Europe. They were one of the highest paid acts in the Vaudeville circuit. Many other actors started or advanced their careers with the Whitman Sisters’ company. People of all races enjoyed their show. Even after Vaudeville was no longer in its prime, they continued to perform in theaters and churches around the nation and were admired by all types of audience members.” A typical show included “jubilee songs and coon shouts, cakewalks and breakdowns, comedians, midgets, cross-dressers, beautiful dancing girls, pickaninnies, a jazz band.”
Other notable performers in the company at various times included Leonard Reed, Willie Bryant, Jeni Le Gon, Count Basie, Lonnie Johnson, and Bill Robinson. Despite their forty years of popularity, information about them all but disappeared. They left no film, nor sheet music, and close to no records, though Essie made some recordings for Black Swan and Paramount in the early 1920s.
Mabel Whitman died in 1942, the surviving sisters were interviewed in the 1960s by Jean and Marshall Stearns, who included a chapter about the Whitman’s in their work Jazz Dance. Their full role was uncovered by the efforts of African American Theater Studies scholar After Essie retired from performing, she became a lay preacher in Chicago. She was married three times and died, aged 80, in a house fire in 1963. Alberta died in Atlanta in 1964, and Alice died in Chicago in 1968. Alice’s son, Albert “Pops” Whitman, became a noted tap dancer in his own right.
The Whitman Sisters are formed – African American Registry (aaregistry.org)

The Royalty of Negro Vaudeville