In 1994, she was nominated and performed at the Juno Awards for Best Global Recording, for the album Condor Meets the Eagle by Kanatan Aski with Pura Fé. She released the CD, Mahk Jchi with Ulali on Corn, Beans, and Squash Music and she appeared with Ulali on Robbie Robertson’s Music for the Native Americans.

In 1995, she released her first solo album, the R&B inspired, Caution to the Wind, written and produced by James McBride on Shanachie Records. She also appeared on Jay Leno’s The Tonight Show with Ulali and Robbie Robertson, debuting the Ulali song Mahk Jchi (Heartbeat Drum Song), which went platinum in Italy. 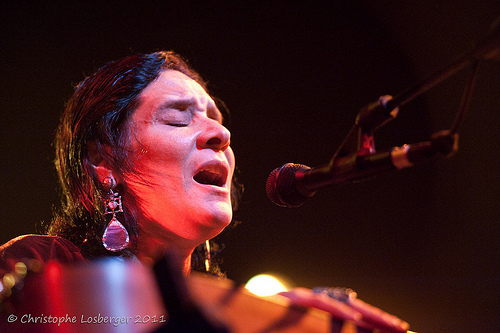 She has appeared on many recordings and film soundtracks, including the Indigo Girls, Shaming of the Sun, Miramax’s Smoke Signals soundtrack, the Turner Documentary series The Native Americans, Giant Leap DVD, The World Festival of Sacred Music for the Dalai Lama, Showtime’s The L-Word, and “A Thousand Roads” soundtrack.

Pura Fé moved to North Carolina in the 1990s to be closer to her Tuscarora roots and communities. She volunteered to teach Native youth in the rural Indian communities of Robeson County, North Carolina. She won the Community Spirit Award from the First Peoples Fund of the Tides Foundation, for her volunteered contributions and later won their fellowship award.