Historian John Hope Franklin, who died this week at 94, both chronicled and lived through racism in America. One of those firsthand experiences with racism came when he was a 12-year-old boy in Tulsa, Okla., in the 1920s.

“It was my first year as a Boy Scout, and I’m very, very excited about fulfilling all of the obligations of the Boy Scouts, and I’ve got so much enthusiasm and so much anxiety to be the best Boy Scout I can possibly be,” he told his son, John W. Franklin, last year.

“One of the admonitions that we had was that we had to do a good deed every day,” he said. So, while standing at a street corner in downtown Tulsa, Franklin was eyeing an opportunity to help while waiting for the light to turn, he recalled.

“And I saw this woman as she was stepping off the curb — and she had a cane — and I thought, ‘Oh my goodness, she can’t see,’ ” Franklin said. “And so I walked up to her and I said ‘Could I help you cross?’ She said, ‘Oh, yes, I’m so glad.’ And she grabbed on my arm as though I was the last person on earth.”

“We got about halfway across the street — and she’s so happy and laughing and talking — she said, ‘Are you white or black?’ And I told her I was colored, and she said, ‘Get your filthy hands off of me,’ and I got my hands off of her,” Franklin said.

Franklin said that he had reflected on that moment: “That this woman, who could not see and who was in desperate need of help, was not as interested in help as she was in being certain that a young black man didn’t touch her. And that if she couldn’t see, she certainly couldn’t know whether my hands were clean or dirty. And I knew then that we were in deep trouble to overcome that kind of racial hostility.”

Produced for Morning Edition by Katie Simon. The senior producer for StoryCorps is Michael Garofalo. 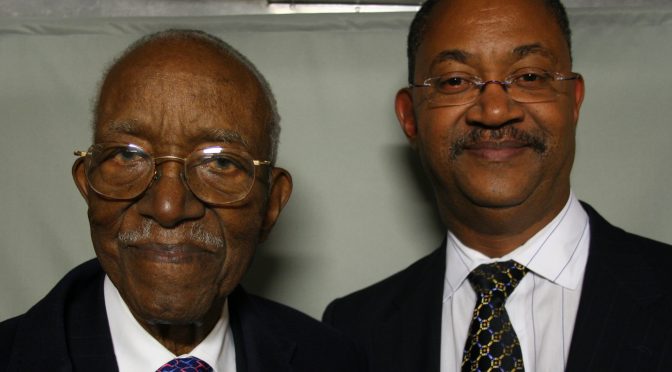 Even today important aspects of the history of slavery remain shrouded in myth and legend. Many people still believe that slaves were generally content, that racial violence on the plantation was an aberration, and that the few who ran away struck out for the Promised Land in the North or Canada. We have carefully scrutinized those who challenged the system; when, where, and how they ran away; how long they remained out; how they survived away from the plantation; and how and when they were brought back and punished. We examine the motives of absentees, or those who left the farm or plantation for a few days or weeks; the incentives of outlyers, or those who hid out in the woods for months, sometimes years; and the activities of maroons, who established camps in remote swamps and bayous. We also examine how”term slaves,” or those to be emancipated at a future date, responded to their status and how free blacks assisted their brethren and on occasion themselves became runaways.
“Of equal importance, we seek to analyze the motives and responses of the slaveholding class and other whites. How did owners react to such intransigence in their midst? How did they attempt to halt the flow of runaways? What laws did they seek to enact? What punishments did they administer? How successfully did they curtail such dissidence? Indeed, it is less important to discover what happened to individual slaves than to understand the relationship between the owners and the runaways who challenged the system, a relationship that reveals perhaps as well as any perspective the true nature of the South’s peculiar institution.”
— John Hope Franklin in”Runaway Slaves: Rebels on the Plantation” · “Because of the life John Hope Franklin lived, the public service he rendered, and the scholarship that was the mark of his distinguished career, we all have a richer understanding of who we are as Americans and our journey as a people. Dr. Franklin will be deeply missed. Michelle and I send our thoughts and prayers to his loved ones, as our nation mourns his loss.” — President Barack Obama

· “John Hope Franklin was one of the most important American historians of the 20th century and one of the people I most admired. I was honored he agreed to be the head of the President’s Initiative on Race. He led his committee all over America to listen to people of all races, faiths, cultures, and classes. And he produced a remarkable report on the ways in which we remain divided along color lines and what we can do about it. During the process, we became friends and I learned a lot from him about history, politics, and life. He graced our country with his life, his scholarship, and his citizenship. Hillary and I will miss him very much. Our hearts and prayers go out to his family and friends.” — Former President Bill Clinton · Today we mourn the passing of one of our nation’s most distinguished scholars, historian John Hope Franklin. His academic and civic contributions helped integrate the African-American narrative into American history – reflecting one of our nation’s most cherished goals of creating a stronger and more united America. The author of the landmark study of African Americans, From Slavery to Freedom, Professor Franklin chaired the history departments at Brooklyn College and the University of Chicago, before becoming James B. Duke Professor of History at Duke University. The John Hope Franklin Center for Interdisciplinary and International Studies and the Franklin Humanities Institute at Duke remain as permanent monuments to his contributions in academia and public policy. John Hope Franklin successfully bridged the gap between theory and practice. That was never more evident than his scholarly work on President Bill Clinton’s Task Force on Race – for which he received the Presidential Medal of Freedom, his invaluable work on the history of African Americans, and his seminal research used in the landmark case, Brown v. Board of Education. Let us honor the lasting legacy of John Hope Franklin by maintaining the vibrancy of our nation through our commitment to progress and equality for all.” — Speaker Nancy Pelosi’s statement on the passing of renowned historian John Hope Franklin.