During these developmental years, Lorraine Hansberry also completed a seminar on African history under W.E.B. Du Bois, wrote a research paper on The Belgian Congo: A Preliminary Report on Its Land, Its History and Its People during this course. William Edward Burghardt “W. E. B.” Du Bois (pronounced /duːˈbɔɪz/ doo-boyz; February 23, 1868 – August 27, 1963) was an American sociologist, historian, civil rights activist, Pan-Africanist, author, and editor. Born in Great Barrington, Massachusetts, Du Bois grew up in a relatively tolerant and integrated community. After graduating from Harvard, where he was the first African American to earn a doctorate, he became a professor of history, sociology, and economics at Atlanta University. Du Bois was one of the co-founders of the National Association for the Advancement of Colored People (NAACP) in 1909.- (From Wikipedia, the free encyclopedia)

In A Raisin in the Sun a direct link to Africa was made through the Nigerian character Asagai, who represented the first appearance of an intellectual African as a major character in black American drama.

Meaning: Asagi – A  spear with an arrow-type head used for hunting animals. Asagai, in the play, represents standing up for what you believe in.  The character Joseph Asagai (as he called) is a Nigerian student in love with the sister character, Beneatha. Beneatha hopes to learn about her African heritage from him. He eventually proposes marriage to Beneatha and hopes she will return to Nigeria with him. Actors, Louis Gossett Jr. (Asagai) and Diana Sands (Beneatha) in a scene from the play A Raisin in the Sun Marriage and the Ensuing Life: On June 20, 1953, Lorraine Hansberry married Robert B. Nemiroff, a Jewish literature student and songwriter, whom she had met on a picket line protesting discrimination at New York University. It was assumed that this intellectual and political connection drew them to each other. Hansberry left the Freedom staff in order to work as a waitress and cashier so she could write during her spare time and support her husband through his music ventures.  In 1956, Lorraine’s husband would gain success when a song he wrote  Cindy, Oh Cindy { http://youtu.be/MNKJLUyRjC8 } became a hit. This allowed Lorraine to completely devote herself to her writing. It is then that she began writing what would eventually become the play A Raisin in the Sun. “In March 1964 she quietly divorced Robert Nemiroff, formalizing the separation that had occurred several years earlier. Only close friends and family had known; their continued collaboration as theater artists and activists had masked Hansberry’s homosexuality. Those outside their close circle only learned of the divorce when Hansberry’s  will was read in 1965.” “The thing that makes you exceptional, if you are at all, is inevitably that which must also make you lonely.” ~ Lorraine Hansberry

“I think it is about time that equipped women began to take on some of the ethical questions which a male-dominated culture has produced,” Hansberry wrote in one letter, explaining, “There may be women to emerge who will be able to formulate a new and possible concept that homosexual persecution and condemnation has at its roots not only social ignorance but a philosophically active anti-feminist dogma.” A Raisin in the Sun: Lorraine Hansberry originally titled the play The Crystal Stair, after a line in the Langston Hughes’ poem titled Mother to Son. Eventually, Hansberry would re-name the play A Raisin in the Sun,

after another Langston Hughes poem. Langston Hughes wrote the poem, and Lorraine Hansberry was inspired – both by the poem and by her own real-life experience.

Langston Hughes was an American poet, novelist, and playwright whose African-American themes made him a primary contributor to the Harlem Renaissance of the 1920s.

What happens to a dream deferred? Does it dry up  like a raisin in the sun?

Or fester like a sore–   And then run?

Or crust and sugar over–   like a syrupy sweet?

Or does it explode? 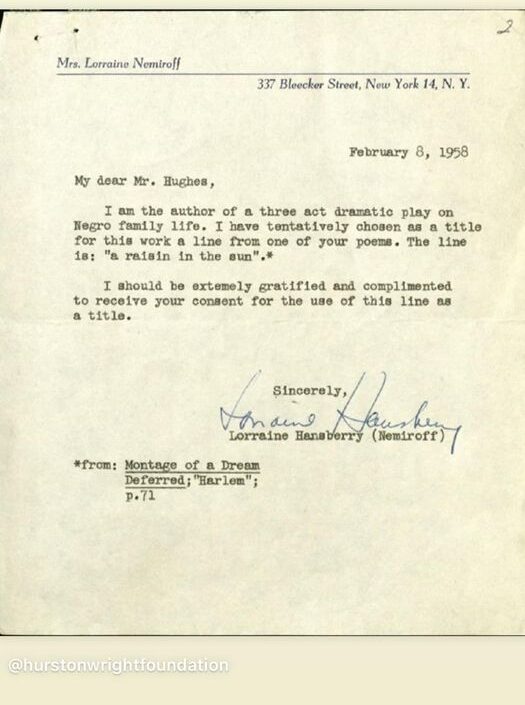 Hughes’s poem addresses the state of Black dreams at a time, 20 years after the great depression had killed the Harlem Renaissance and devastated Black communities. Black dreams and opportunities seemed to be an afterthought amid the rampant racism happening before the beginning of the major Civil Rights Movement.  Harlem: A Dream Deferred captures the tension between the need for Black expression and the impossibility of expression because of American Society’s oppression. Hansberry’s reference to Hughes’s poem in her play’s title highlights the importance of dreams in A Raisin in the Sun., and the struggle of the characters within the play to realize their individual dreams, which are all tied to the major dream of equality within America.

“I mostly went to Jim Crow schools, on the South Side of Chicago, which meant half-day schools, and to this day I can’t count. My parents were some peculiar kind of democrats. They could afford to send us to private schools, but they didn’t believe in it. I went to three grade schools—Felsenthal, Betsy Ross, and A. O. Sexton, the last of them in a white neighborhood, where Daddy bought a house when I was eight. My mother is a remarkable woman, with great courage. She sat in that house for eight months with us—while Daddy spent most of his time in Washington fighting his case—in what was, to put it mildly, a very hostile neighborhood. I was on the porch one day with my sister, swinging my legs when a mob gathered. We went inside, and while we were in our living room, a brick came crashing through the window with such force it embedded itself in the opposite wall. I was the one the brick almost hit.” – Lorraine Hansberry

“Richards had the whole picture now: Hansberry was an unknown playwright; this was her first play, and it didn’t have out-of-the-box commercial appeal. Nevertheless, he agreed to direct, because getting involved didn’t pose much of a risk, really—there wasn’t a lot at stake, except his time. “It was no big deal.” Besides, he needed the experience directing.
There was another hurdle to be cleared, however, which was Hansberry’s first draft. The way she had written it, the main conflict in A RAISIN IN THE SUN was the mother’s (Lena Younger’s) decision over how to make the best use of her late husband’s life insurance money to help the next generation. In the first act, all the characters speak to Mama Younger and then leave, clearly establishing her as the person around whom the play revolves. Gradually, Lorraine “bought into the idea,” Richards said, “that the play was really about Walter Lee Younger’s coming-of-age. Learning to deal with the past, his father, and the present, which is what he was living through. And what was being imposed on him by social circumstances.” But to switch protagonists wouldn’t be easy. The entire play would have to be restructured.”
https://www.americantheatre.org/2022/01/12/when-lorraine-met-lloyd-and-a-raisin-in-the-sun-got-raised/?fbclid=IwAR0UApPOb6v_wS-qfZUf-sj13eWnBY3hL_EsF_ZpQrSmCkvNHQmb_ysiv7I