Toni has earned a bachelors degree in psychology from Oklahoma State University, a Masters degree in Counseling from The Ohio State University, and a doctorate in Organizational Behavior from Case Western Reserve University. At Denison, her courses include Introduction to Black Studies, Issues in Feminism, Feminist Research Methods; Black Women and Organizational Leadership; and, Black Women’s Lives: Autobiography as Protest. She has published numerous articles on women’s resistance to and recovery from race, class, gender oppression. She is a published poet, with works appearing in the Cimarron Review, and is known to read and perform her spoken word pieces on the Denison campus. 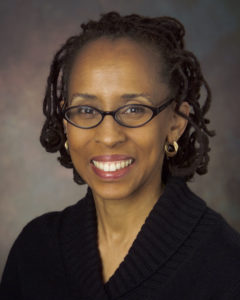 “Is this class just about opinions or what?’: Scripted questions as indicators of group development in the introduction to women’s studies class,” in Teaching Introduction to Women’s Studies: Expectations and Strategies, Barbara Scott Winkler and Carolyn DiPalma, eds., Westport Connecticut: Greenwood Publishing Group, Toni C. King, 1999.

“I am because we are’: Clinical interpretations of communal experience among African American women.” Women and Therapy, Toni C. King and S. Alease Ferguson, 1996, 18(1): 33-45.