Here’s a throwback to one of my favorite friends and colleagues in life Glynn Turman. This was a classic (and fun) scene from the great playwright Lonne Elder III’s “Ceremonies in Dark Old Men”. Glynn’s “Theo” and my “Blue Haven”. –  {“Glynn Turman and I have been close and dear friends for decades, but had never shared a stage together until this unforgettable production of “Ceremonies in Dark Old Men” This was one of the first NEC productions to move from stage to television, and I had the enormous pleasure of ‘finally’ acting with Glynn. Here In this scene, I was Harlem badass gangster “Blue Haven” in the classic confrontation scene with Glynn’s “Theo Parker”! I have never been so soul-satisfied as an actor than playing opposite the masterful Glynn Turman!”} 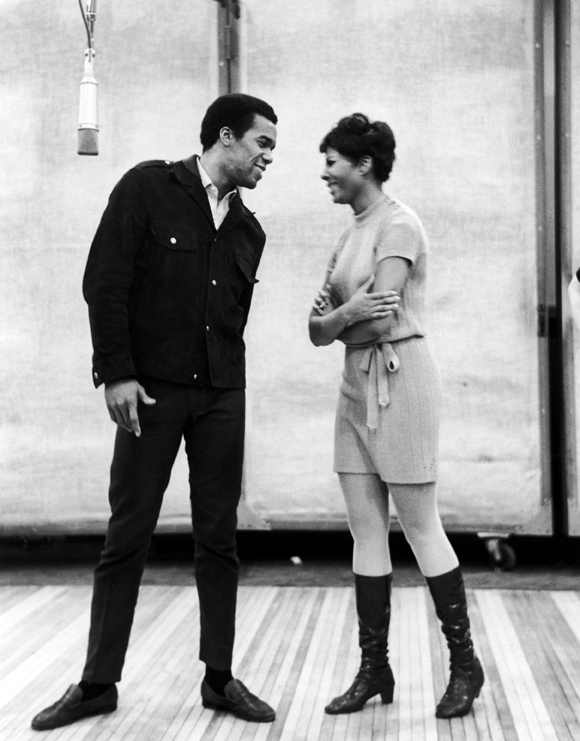 Robert Hooks and Leslie Uggams –
Hallelujah, Baby!, written by Arthur Laurents, with a score by Jule Styne and lyrics by Betty Comden and Adolph Green opened at the Martin Beck Theatre on April 26, 1967, it ran for 293 performances. (1967) Co-founders of the renowned theatrical troupe The Negro Ensemble Company. 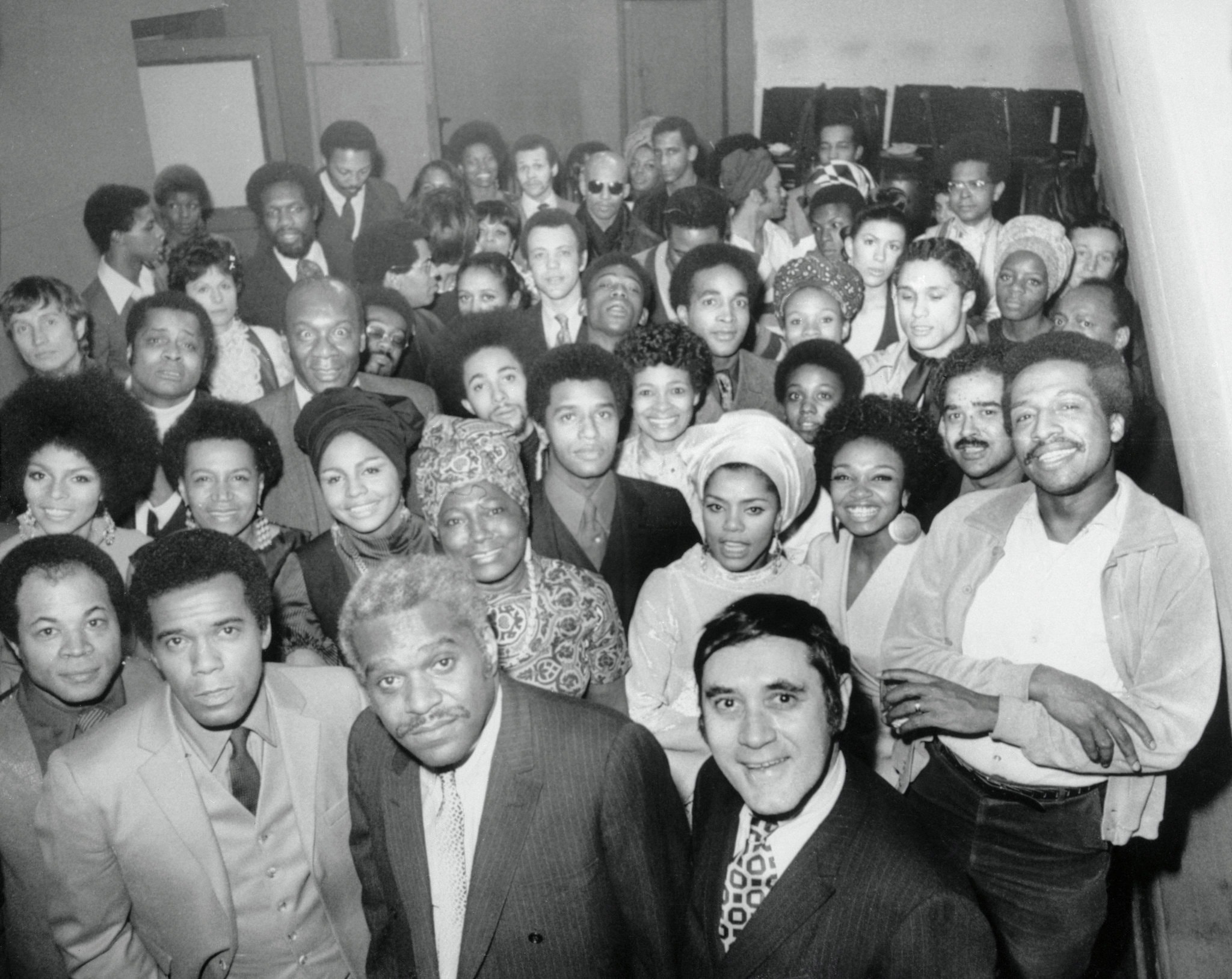 Robert Hooks, Douglas Turner Ward, and Gerald Krone (front row from left), the founders of the Negro Ensemble Company, with other members of the company in 1969.Credit…Bettmann, via Getty Images 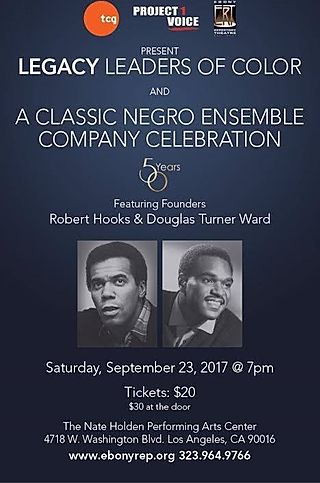 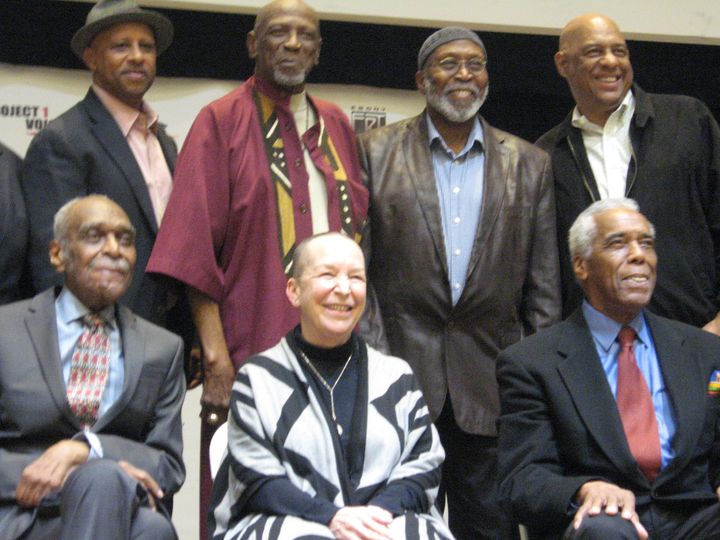 “Staying in celebration mode of the world-famous NEC, and in honor and tribute to its recently departed Artistic Director, Douglas Turner Ward. Photographed here is an august assemblage of NEC alumni joining in its 50th Anniversary Founders Tour in Atlanta Ga.! Standing, Ruben Santiago Hudson, Louis Gossett Jr., the late Walter Dallas, and Oz Scott. Seated: Douglas Turner Ward, Pearl Cleague, and Me. What a grand and auspicious coming together of some of our NEC greats!”

A Raisin In The Sun 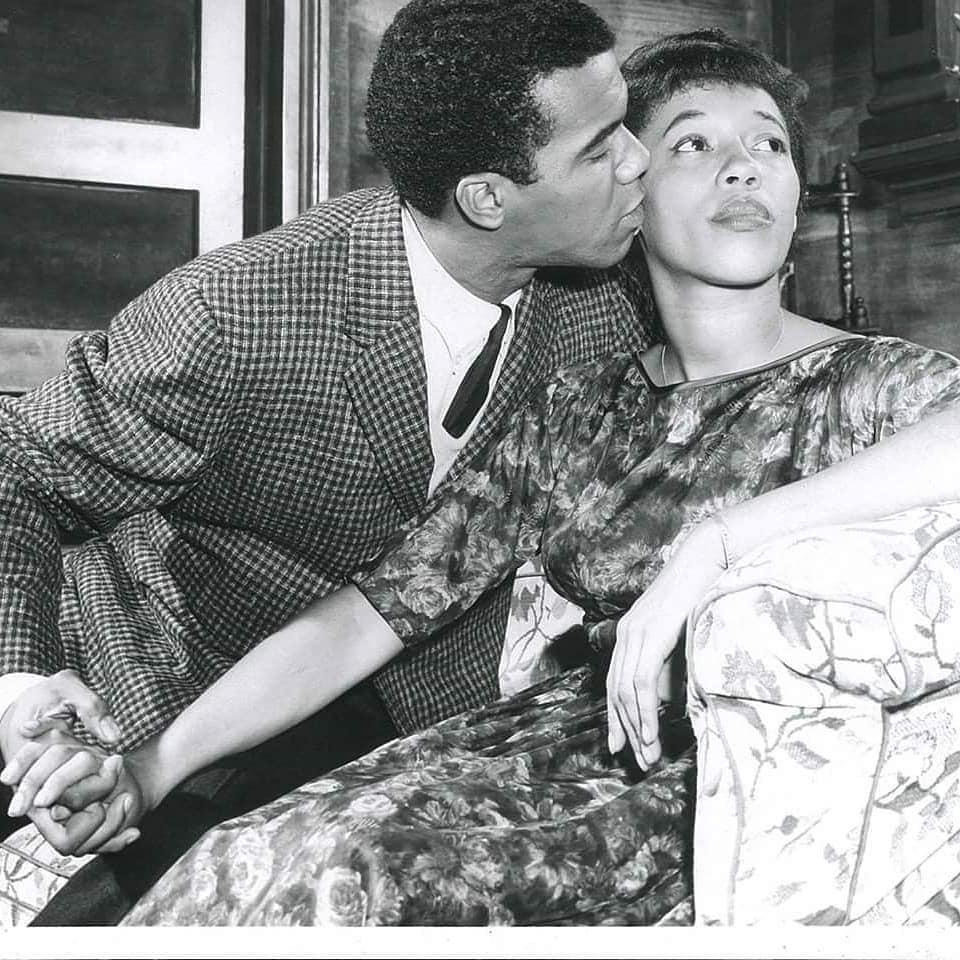 Robert Hooks and Diana in the original production of A RAISIN IN THE SUN.  Mr. Hooks—then known as Bobby Dean Hooks—replaced Louis Gossett, Jr. during the show’s Broadway run and later appeared with Diana on the national tour.

“Little did I know when I was studying acting in Philadelphia and attended — on that fateful evening! — my very first professional play with an all-Black cast during its pre-Broadway run, that I would soon be hired for that same Broadway production a few months later! Of course, by that time it had become a huge Broadway hit and the first to be written, directed, and performed by Black artists. “A Raisin in the Sun” had become the most critically acclaimed Broadway play ever, and I was cast to replace Louis Gossett (who played DIANA SANDS’ suitor…hence me and Diana!) in the role of George Murchison in that original production! Louis was on his way to Hollywood to reprise his role in the film version. And I was the extraordinarily lucky young thespian fresh in New York, getting his first Broadway job in the same play that changed my life and prompted me to make the move to New York. And performing with THE GREATS!“ 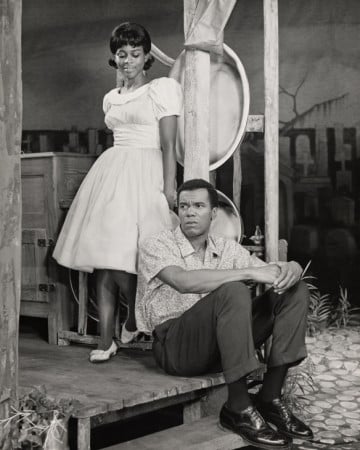 Broadway play “Tiger Tiger Burning Bright” which opened at the Booth Theatre in December 1962, here is Cicely Tyson and me, playing brother and sister in the Peter Feibleman drama. The play also co-starred Alvin Ailey in his first (and only dramatic) acting role in a Broadway play! There was a stupendous array of Black talent in “Tiger Tiger”: Diana Sands, Ellen Holly, Roscoe Lee Browne, Claudia McNeil, Al Freeman Jr., Robert Macbeth, Janet MacLaughlin among others. 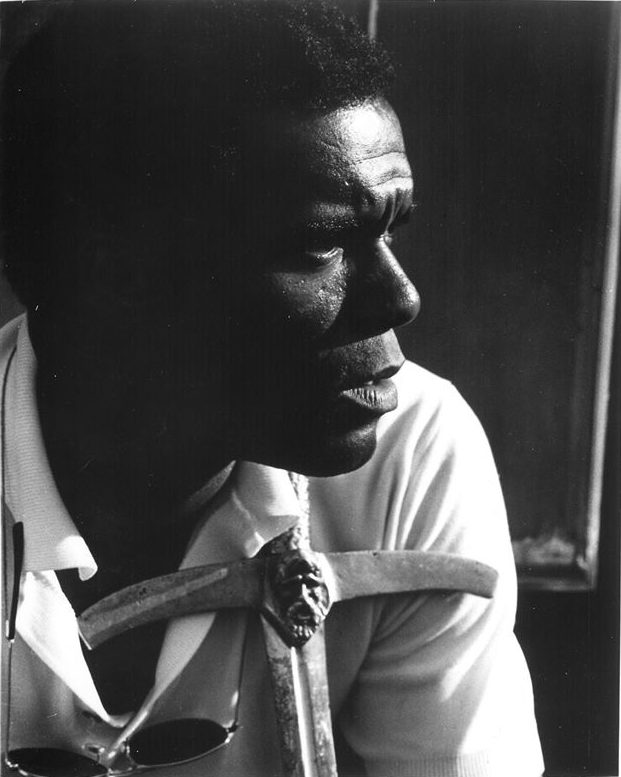 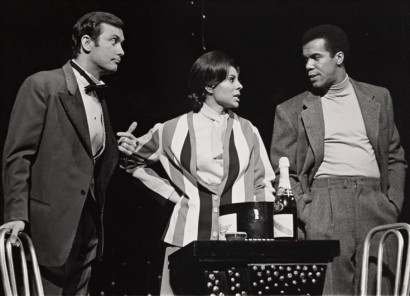 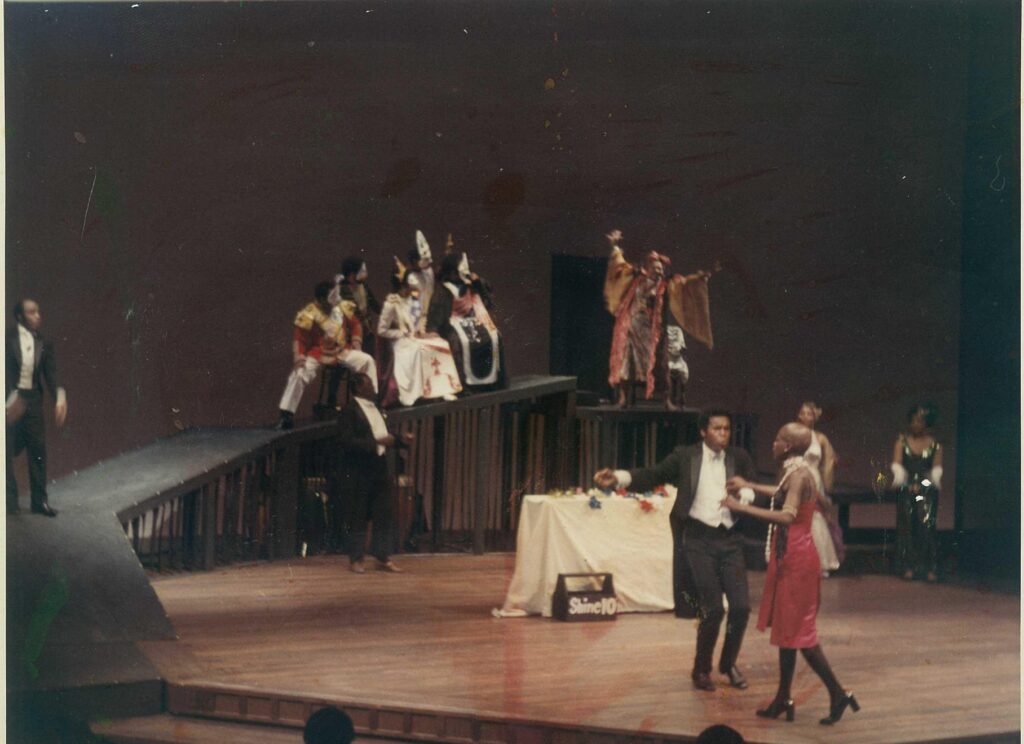 The original production of the play, here in its second year (it ran for nearly four.) James Earl left for a film I replaced him in the lead role opposite CicelyTyson, Roscoe Lee Browne, Lou Gossett, Maya Angelou, Louise Stubbs, Godfrey Cambridge, Chuck Gordone, Raymond St Jacques, Helen Martin, Vinnie Burrows, Lex Monson, Larry Riley, and other brilliant performers. As an artist, Nothing so soul-fulfilling for me since “The Blacks”!
“The Blacks” (circa 1962) playing the amazing role of “Village”. Here I am (in a dance monologue) playing opposite the legendary Cicely Tyson (the first actress to shave her head bald in NY theatre history!) That’s the great Roscoe Lee Browne on the left ramp! along with other brilliant Black actors of the day!. Hands down one of the best and most intricate roles I ever got to play as a stage artist! The play ran for nearly 4 years Off-Broadway!“

Though I had already performed in three Broadway plays portraying amazing young Black men and building a strong reputation on the New York stage. It wasn’t until ‘Dutchman’, the absolutely awesome two character play by the then ‘brand new’ Black poet/playwright LeRoi Jones (later Imamu Baraka.) As an actor, it changed my career status big time, and led to a higher cultural awareness, and created many cultural avenues for me as a Black artist, and eventually a successful theatre builder! Dutchman was a scathing confrontational drama set on a New York City subway train that shocked and enthralled Off-Broadway audiences throughout its popular run at Off Broadway’s Cherry Lane Theatre. Then we successfully toured Europe after closing. Here is the brilliant actress Jennifer West giving one of the great performances of that 1964 theatre season! 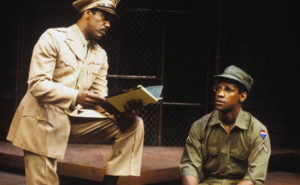 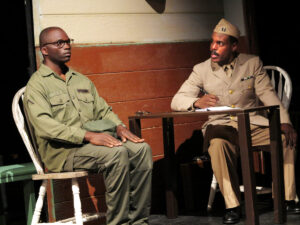 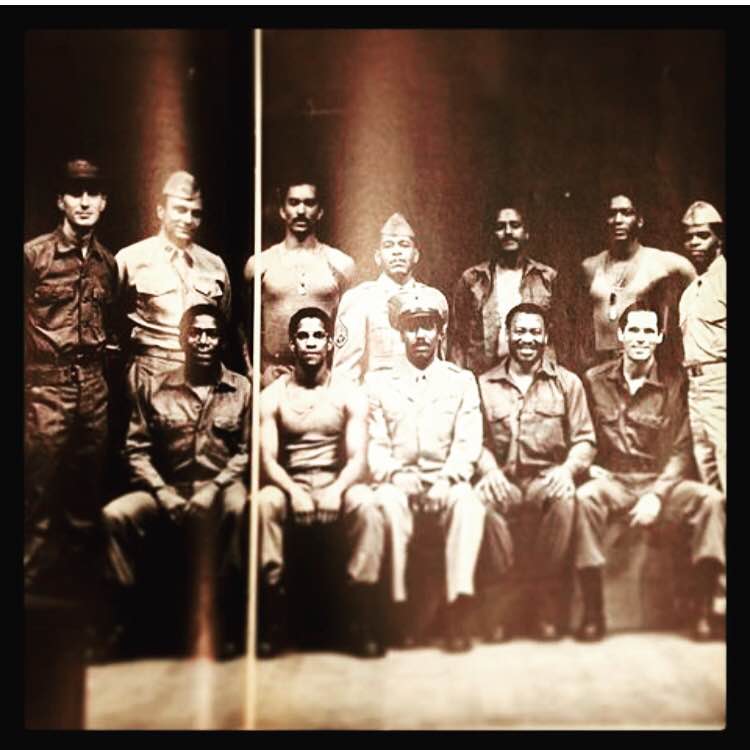