” After that tour ended, I got the call from George Faison to prepare myself for The Cotton Club movie.” 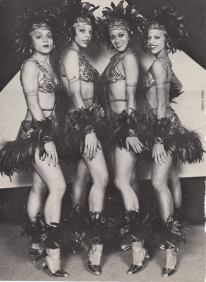 “I was going to be one of the principal dancers and would also work once gain with Gregory Hines and tap choreographer, Henry LeTang. It was going to be the first major film entirely shot in NYC in a very long time. Francis Ford Coppola was due to direct and I was excited!  A three-month shoot turned into six months.  I learned so much about lighting and sound and once again grew as an artist. I am now in my early twenties and feel like a woman although just about everybody in the film has known me since I’m fifteen. So I’m still with my industry family.  I was introduced to a man who at the time was an actor who had success in the past.  He was a struggling actor (which was not odd in New York City) and since I really did not think too much about him regarding a relationship, befriending him did not seem like a bad idea.  Because my first love and I at this point had not reunited, I occasionally dated.  I was very afraid of men though because they always thought I was a lot older and faster because I was quite worldly, could communicate in several languages, and had life experiences, not of a twenty-one-year-old.  But, I was still a little girl in that respect and truly believed in “love.” I had been offered the world especially living in Europe, but everything you do, there is a price to pay.”

“Being “taken care of” never appealed to me because I had become an independent woman at the age of fifteen. My bottom line was, if I didn’t care for you, I couldn’t be with you!’

The next phase of her career would change my life forever. George Faison called her once again to let me know the revival of The Wiz that had been on the road for a year was headed back to Broadway at The Lunt Fontaine Theatre. He wanted her to join the cast to cover The Eye of the Tornado and appear as one of the Poppies, and the Act 2 dance ensemble numbers. Carla agreed and was living in the artist’s complex called Manhattan Plaza (midtown New York City), which was literally three blocks away from the theatre. The show did not survive the second time on Broadway very long, but it was nice being reunited with Stephanie Mills again.

After hearing about a Broadway show that had recently opened, “42nd Street” was looking to create the San Francisco Company that would later become the 2nd National Tour. The show was a predominately white 1930’s period show. 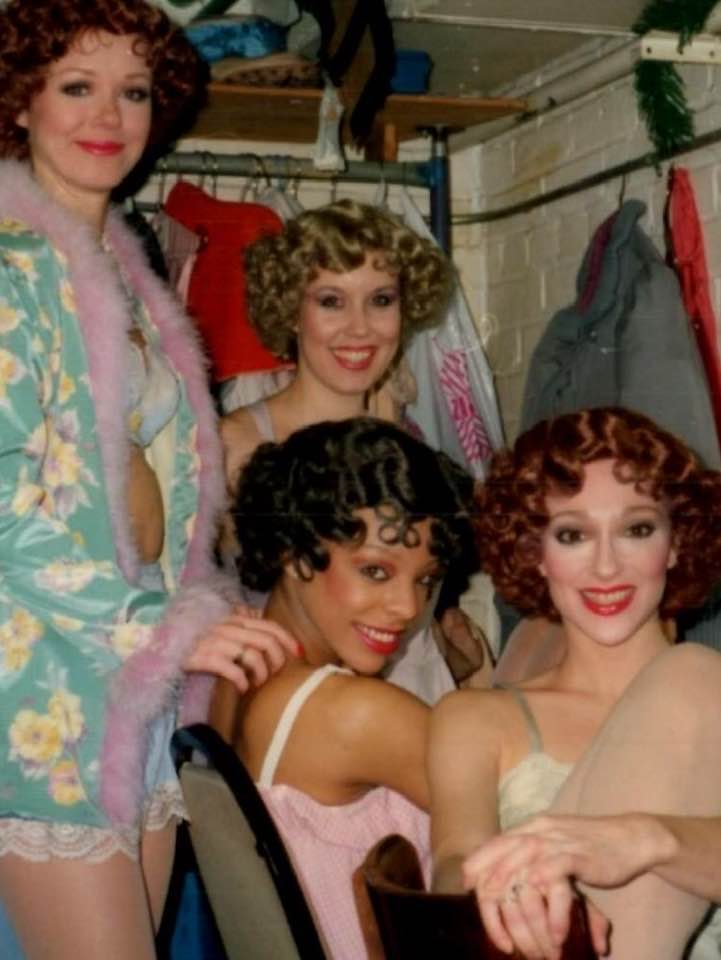 It seems like yesterday, well the day before yesterday… It’s actually 1986 and I and the gals were doing “42nd Street” on Broadway. What amazing memories and so much laughter! Let’s see we have Vicki, Karen, and Rosemary. I Love you, Dames!

“Although I knew this, I was qualified, and that was all that mattered to me! I was a real tap dancer and could out-tap most females at the time on Broadway. S o there I was. Gower Champion had just passed and his associate choreographer Karen had taken over his role. I walked on stage and being the direct no-nonsense to point person I was, I simply asked her, “Are you taking any color?” After she told me yes, my next question was ”What color hair would you like me to appear in?”  You see in my dance bag, I carried a blond, red, black, and brown wig along with several dance outfits for those producers with “no artistic vision.”  Trust me: Been there, done that! Her answer was “I looked beautiful as is” and she now wanted to hear me sing and see me dance.” 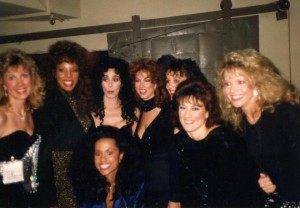 “My Academy Award performance the year Cher (standing next to me) won her Oscar!” 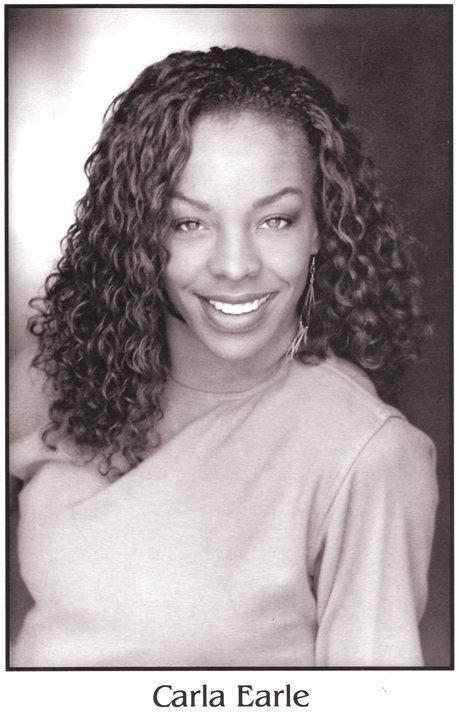 By that afternoon, she was hired on the spot and had a month before I was to leave New York City once again to rehearse in Los Angeles for two months.  Carla had engaged in a relationship that was pretty turbulent, so going out of town seemed like a great idea to her. However, prior to my departure, I began having some complications that needed to medically be checked out.  I had a series of tests done at Lenox Hill Hospital in Manhattan and I was told they suspected cancer and growth that would require being removed in the next six months or so. Her doctor feared it was related to the endometriosis I suffered from as a teenager. Now that I signed my contract, I was committed, so I would figure it all out by the time I got to San Francisco. UC Med in S.F. knew I was arriving and my doctor in New York City had colleagues willing to take my case there.  So there I am, scared, thinking I have ovarian cancer and that my life could be in serious trouble! My only salvation at that time, other than God, was Tapping in 42nd Street!  Rehearsals in L.A. were a lot of fun and the cast bonded quite well. I felt a lot of love and warmth and God knows I needed it then.  My relationship was still turbulent, but I was so focused on my health and the show, it didn’t even matter.  After two months in L.A., we left for San Francisco to start tech rehearsals and previews.

After a month of being in San Francisco, the show opened and we had rave reviews! Everyone was happy, but I still had been carrying around this secret! So now it was time to face the music. I met the Dr. at UC Med in San Fran as planned and gave him my history. I was to come back in 2 weeks for a biopsy to pinpoint the severity of the problem. Remember it is now 4 1/2 months later, so I must address this growth that would have to be removed soon. When I returned to see the doctor, I told him some information that leads him to put an instrument called a “Doppler” on my stomach, and to all our surprise, I had a heartbeat coming from my stomach so loud you could hear it outside the hospital. So that growth that had to be removed, was a baby! Although I was in shock, I was ecstatic!  I was five months pregnant, in San Francisco on a tour that was to be out for 2 years. The cast was so excited management was so supportive, and as I grew, my costumes grew with me!!!  Dancing with a child in my belly felt natural. I was happy, and always being fed by someone. Fisherman’s Wharf became my second home! I did my Lamaze classes in San Francisco and when the baby’s dad could not attend, I had many “surrogates.”  I only gained 18lbs thru the entire pregnancy,  so I did not show until that last month. I stayed and tapped in the show until I was 8 months! I was given a surprise baby shower by the cast and crew of 42nd Street, and they wanted to throw me a wedding, however, I wasn’t ready for that. My relationship was not solid and, I wasn’t “in love” at this point I just wanted him to be a good dad and not overwhelm him.

The mothers of both sides of our families pressured us to do “the right thing” and get married, for the baby’s sake. My father was more of a realist and knew the relationship was not solid, I wasn’t in love and he wasn’t going to fake it! So I waited.

I knew when it was time to stop performing. I remember after the first act before the curtain went down, my understudy was seated in the balcony and my eyes found her, and I signaled her to come backstage and “get ready” for Act 2. It was time to go home. Before my departure, It was promised that I would be re-hired if I decided I still wanted to perform. 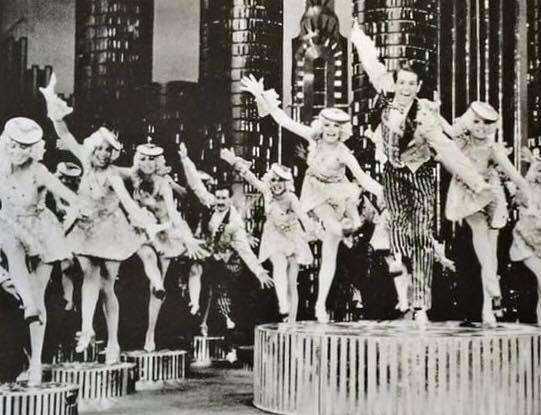 I know it’s really hard to pick me out, but I’m the one tapping on that dime nine months pregnant ( with Christian) in the S.F. Production of 42nd Street. I shortly made my exit to fly home to NYC to deliver my son 3 weeks later. I’m the second on the left in 1985. Wonderful memories with an amazing cast of talented artists!

So I took one step at a time and the 1st task was flying back home to NYC and getting ready to have a baby.

On the morning of September 12, 1985, she was awakened with strong labor pains. By 6:30 am, she was at Lenox Hill Hospital and by 7:36 her son Christian Anthony was born.

“I named him Christian because I was told at 16 years old I could not conceive, and I was blessed not only with a beautiful blue-eyed 7lb. 13 oz baby that only took 45 minutes to deliver, but that female disorder I had from age 16-23 was now over. The cure of that condition was to have a baby. It was like a catch 22 because having the condition could prevent a woman from conceiving. After 3 days, I left the hospital in my blue jeans that I wore prior to my pregnancy. I had only gained 18 lbs and he was almost 8lbs.” 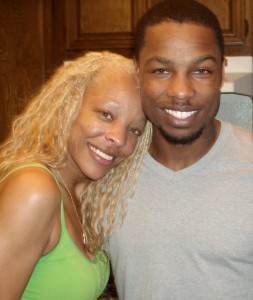 ‘I loved being a mother! I still do! Christian was so sweet and such a good baby. Only cried when hungry, or needing a diaper change. He didn’t even cry when sleepy. He just would go to sleep! I was really lucky. God was preparing a baby who could travel and adjust to my life because three weeks after he was born, Billy Wilson called me to come and meet producers for another production of Bubblin Brown Sugar that was going out on tour. So I put on my cat-suit and pumps, got the baby ready and we strolled up to the Minskoff Rehearsal studio. Many of the “Broadway Gypsies” already had me retired (at 23), due to the condition of “Mommy-hood” so when I walked in with child ready for the gig, they gagged!”