A beautiful expose on my hometown.

Lackawanna in my heart and soul. Nanny and Mother Overton, my strength. Grateful.

Tour the Old Steel Town at the Center of ‘Lackawanna Blues’
In his Broadway play, Ruben Santiago-Hudson revisits the Lackawanna, N.Y., of his youth. A lot has changed since the late 1950s and ’60s, reflected here in recent photographs of the area. 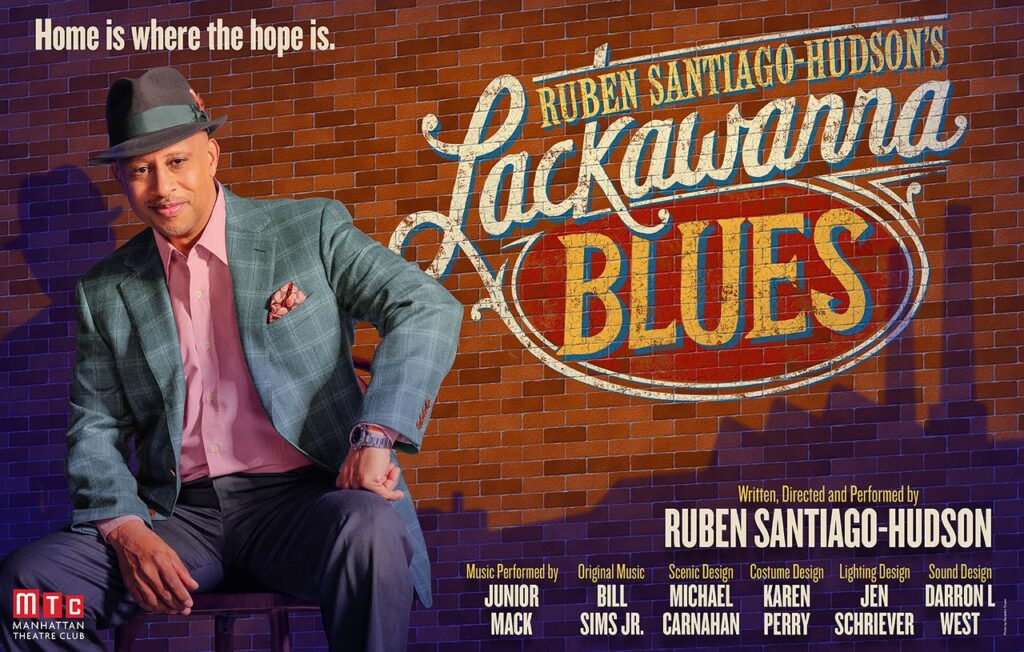 Tony winner Ruben Santiago-Hudson returns to the Main Stem with the Broadway debut of his solo show Lackawanna Blues. The Manhattan Theatre Club production begins previews September 14 at the Samuel J. Friedman Theatre ahead of a September 28 opening.

Written, performed, and directed by Santiago-Hudson, Lackawanna Blues is set in a 1950s boarding house outside of Buffalo. The artist brings to life over 20 characters in the solo performance, celebrating the housemother who raised him, Miss Rachel. 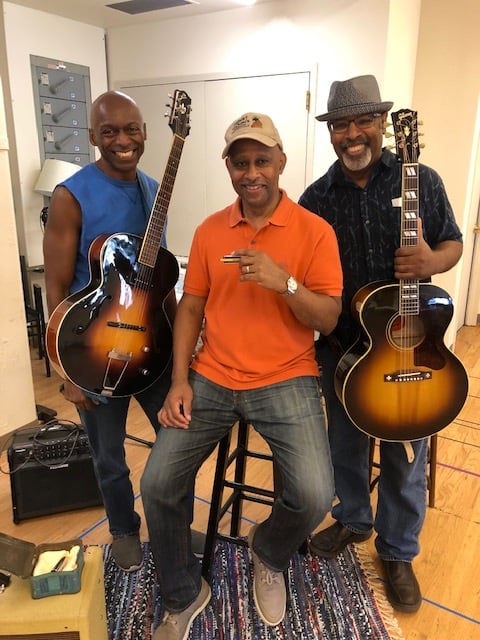 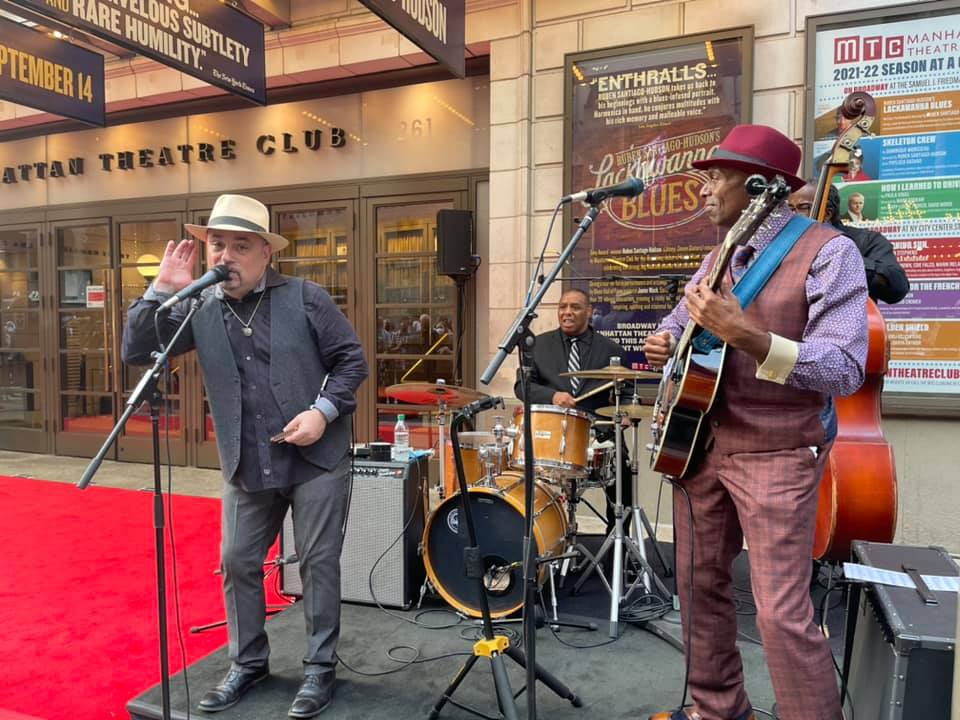 Lacakawanna Blues premiered Off-Broadway in 2001 and was adapted into a television film in 2005. Santiago-Hudson made his Broadway debut in 1992 in Jelly’s Last Jam and won a 1996 Tony Award for his performance in Seven Guitars. He is slated to direct Dominique Morisseau’s Skeleton Crew—also at Manhattan Theatre Club—in 2022. 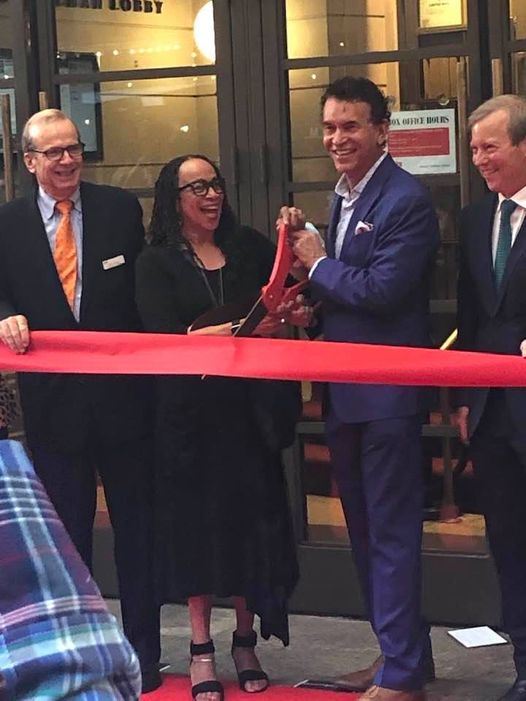 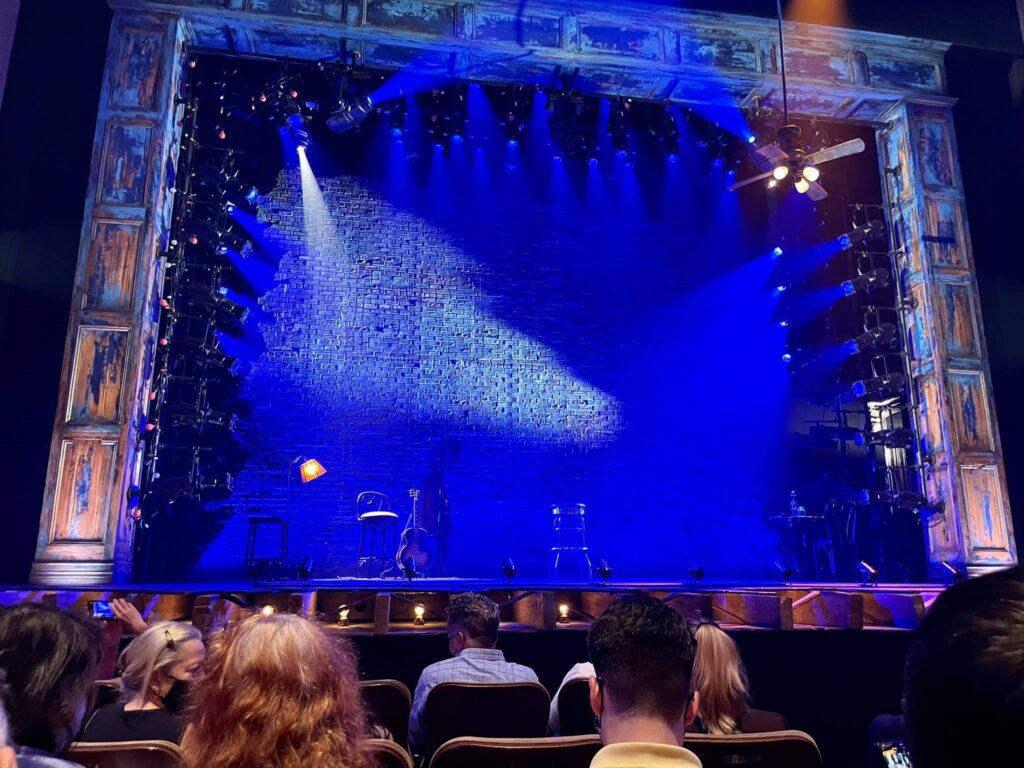 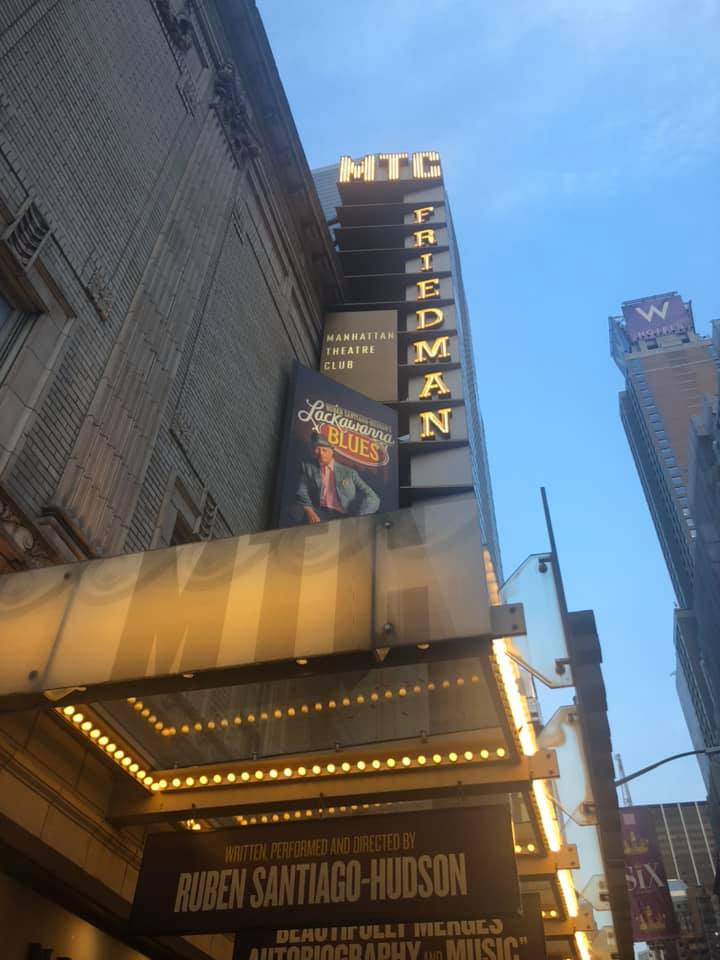 Tony Award winner Ruben Santiago-Hudson returns to MTC for the Broadway debut of his brilliant solo play celebrating the strong, big-hearted woman who raised him: Miss Rachel. In a 1950s boarding house outside Buffalo, Nanny, as she was affectionately called, opened her doors to anyone and everyone in need of kindness, hope, compassion, and care. Giving a tour-de-force performance accompanied by live music written by acclaimed composer Bill Sims Jr. and performed by Blues Hall of Fame Guitarist Junior Mack, Santiago-Hudson embodies more than 20 vibrant characters, creating a richly textured reminiscence that’s inspiring, uplifting, and right at home on Broadway. – BROADWAY WORLD 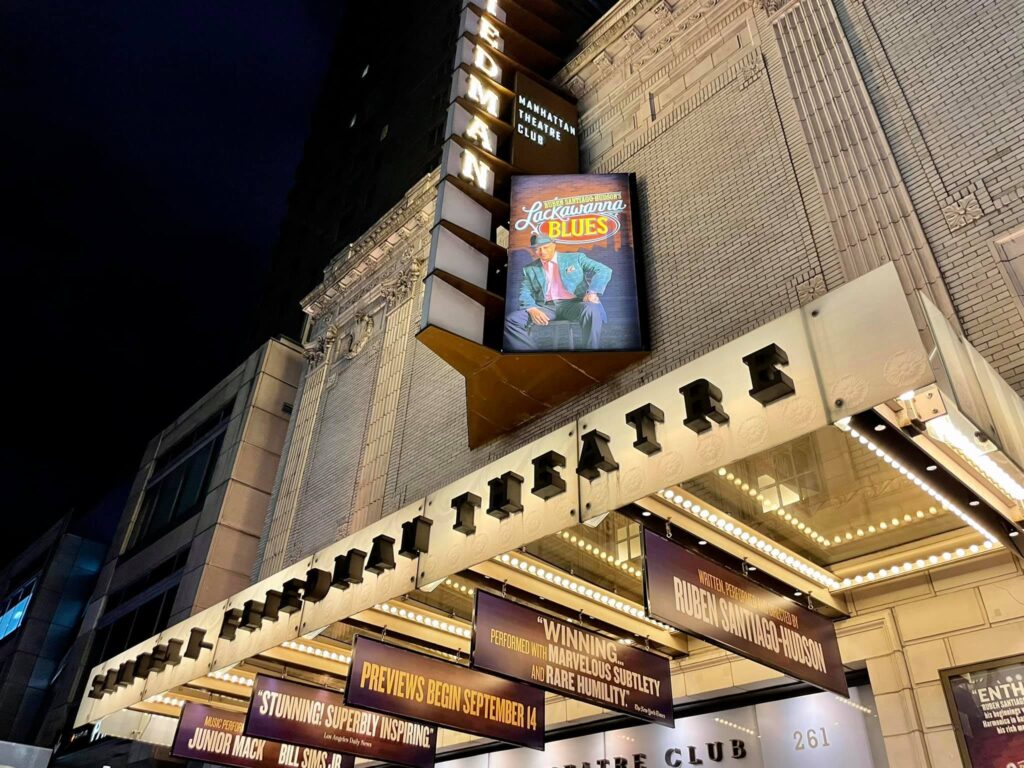 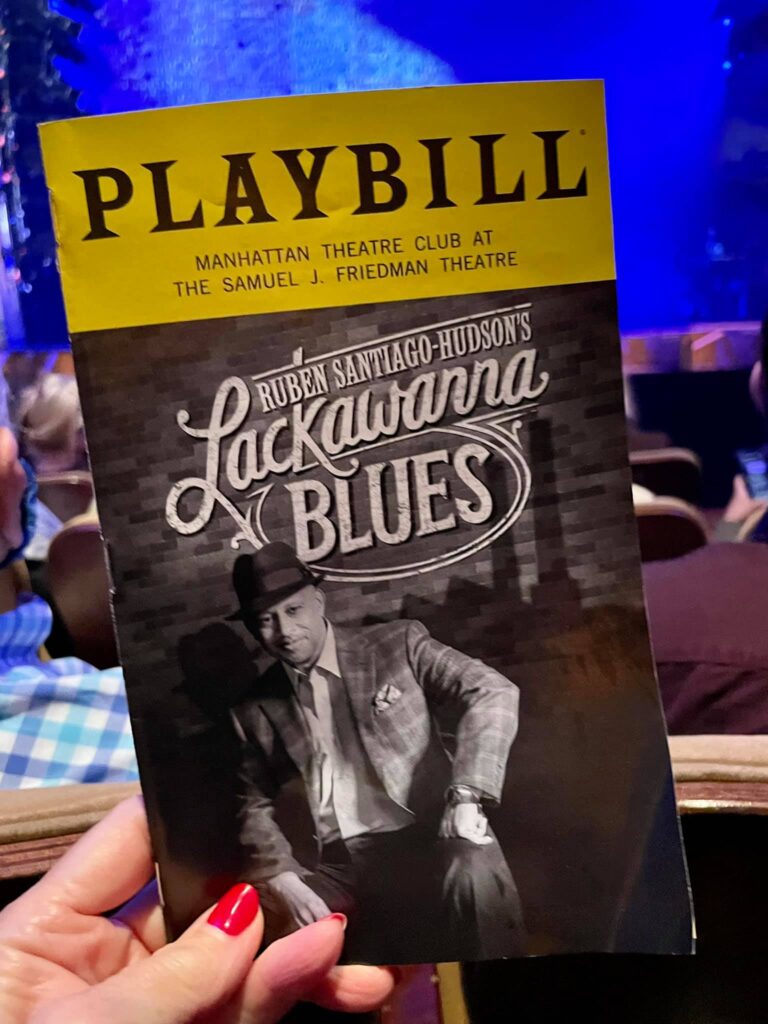 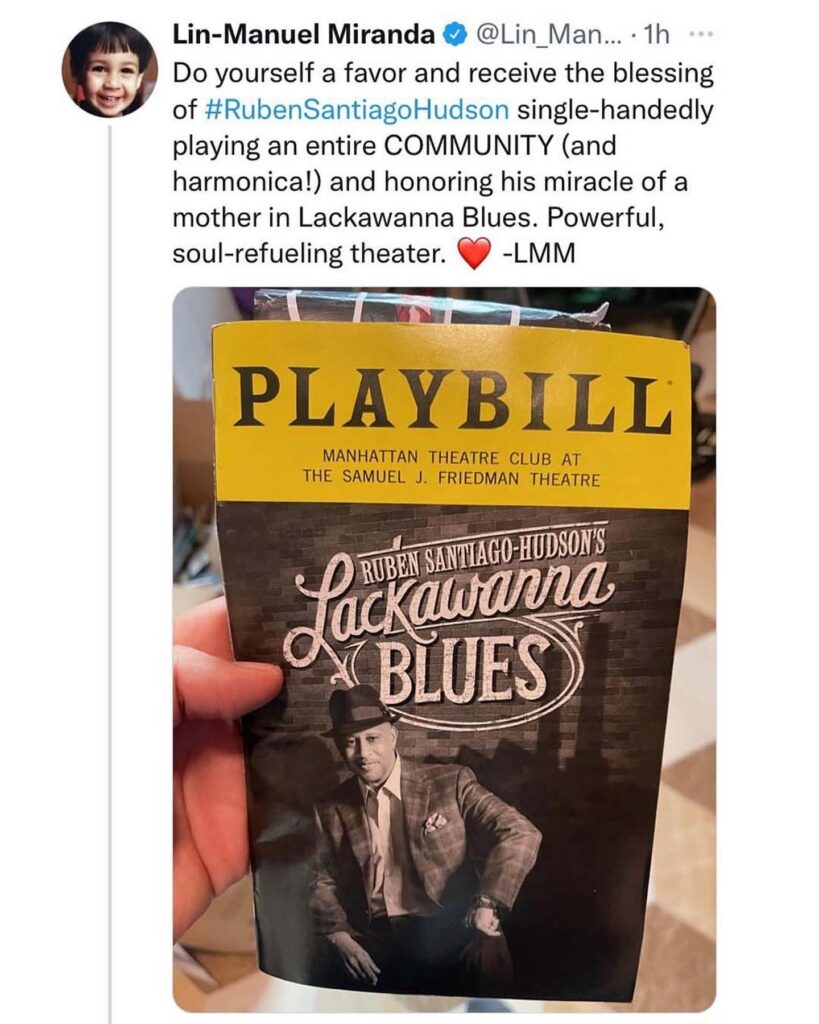 Do yourself a favor and receive the blessing of Ruben Santiago Hudson single-handedly playing an entire COMMUNITY (and harmonica!) and honoring his miracle of a mother in Lackawanna Blues. Powerful, soul-refueling theater. ❤️ – LMM

Let’s see what the critics had to say! 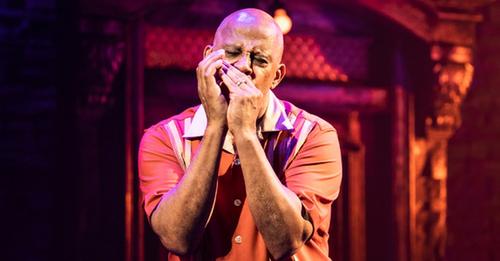 Maya Phillips, The New York Times: It always comes back to Nanny, with her stiff back and neatly folded arms; Santiago-Hudson’s rendering evokes a Cicely Tyson type, a strong Black matriarch not to be trifled with. His narrative performance is impressive for many reasons, but one of the most nuanced is the way Santiago-Hudson sees it all, as a child eavesdropping and peeking through doorways, with curious and affectionate eyes. He grounds us in the details, which brings not just these characters, but also a whole town to life: the way a woman pops her hips, the way a man coughs, even the particular tint of the Lackawanna snow. After all, people may think the blues are about heartbreak, but to get to heartbreak, you first have to pass through love.

Chris Jones, The New York Daily News: Playing at the Samuel J. Freedman Theatre,” Lackawanna Blues” is a one-man show with Santiago-Hudson playing all the roles, and his fans might expect it to have funny characters and some lively blues licks (in this production, courtesy of the on-stage guitarist Junior Mack). And so it does. But few will be prepared for the emotional undercurrent present in Santiago-Hudson’s self-directed performance, which often feels like it is being interrupted by a well of feeling so strong that the actor struggles to process them in the moment.

Greg Evans, Deadline: Ruben Santiago-Hudson summons a world of ghosts, or at least as many as will fill a couple boarding houses and a lifetime of gratitude, in his affectionate Lackawanna Blues, the one-man autobiographical tour through a childhood made golden by the presence of a strong and loving guardian angel.

Adam Feldman, TimeOut NY: An accomplished actor and director, Santiago-Hudson has performed Lackawanna Blues many times since its debut at the Public Theater in 2001, and he knows how to keep it moving in this Manhattan Theatre Club revival. From a perch on the left side of the stage, guitarist Junior Mack provides smartly integrated blues underscoring and vocals, playing original music by Bill Sims Jr. (and occasionally joined by Santiago-Hudson on harmonica); Jen Schriever’s lighting gradually reveals previously imperceptible elements of Michael Carnahan’s deceptively simple-looking set. There is nothing revolutionary about Lackawanna Blues, but it is a loving and skillful evocation of a formidable Black woman and the community she was able to create, through the force of her character, in a world of lack and want. It satisfies a hunger that Broadway seldom serves.

David Finkle, New York Stage Review: Perhaps it’s because I’ve just been reading Charles Dickens-The Life and Adventures of Martin Chuzzlewit-that I took in Ruben Santiago-Hudson’s current Lackawanna Blues revival as stunningly Dickensian. Dealing, as it does, with a young boy brought up in near poverty who encounters any number of memorable characters, Santiago-Hudson’s early travels magically echo those of the prolific 19th-century author.

Frank Scheck, New York Stage Review: There are only two men on stage, but there’s an awfully big crowd populating Lackawanna Blues. Ruben Santiago-Hudson’s autobiographical one-man play (plus musician) paying loving tribute to the woman who raised him features such a gallery of colorful characters that it’s no wonder it was adapted into a cable television movie featuring a large ensemble. But the piece works best as it was originally conceived-the actor narrating the tale and portraying some two dozen other characters in a virtuoso demonstration of solo storytelling.

Robert Hofler, The Wrap: What exactly does Ruben Santiago-Hudson not do in the first Broadway revival of his 2001 play “Lackawanna Blues,” which opened Thursday at MTC’s Samuel J. Friedman Theatre? He has written, directed and stars, giving himself at least two dozen characters to play in this one-person show about growing up Black in the steel town of Lackawanna, New York, in the 1950s and beyond. He sings the blues, accompanied by guitarist Junior Mack, and he plays a mean harmonica, as well as a wide range of characters – including an adorable pet raccoon that’s let loose into the wild, much to the disappointment of Junior.

Matt Windman, amNY: Santiago-Hudson displays remarkable finesse and ease as he switches back and forth between portraying different characters (such as during a confrontation between “Nanny” and his unstable birth mother) or between direct narration to the audience and extended character monologue.

Juan A. Ramirez, Theatrely: “His eyes throughout the show reflect more than a glimmer of the bright lights of Broadway-they spark with the joy of generations and cultures finally expressing themselves on the largest stage in the country. That spark is what makes Lackawanna probably the most honest show in New York right now: 90 minutes of earnest, unsentimental love for one’s past. Under his own direction, Santiago-Hudson takes us on a tour of the people who hung around Miss Rachel’s boarding house, restaurant, and nightclub outside Buffalo circa 1956. Known as Nanny to friends and patrons, the tender-hearted matriarch was “like the government if it really worked,” taking in a colorful array of often-rowdy boarders, she gave food, respite, money, and second chances to those who usually neglected such kindness. The playwright himself wound up under her care when Nanny found out his mother was planning to abandon him, and the two developed an intense bond that lasted past her lifetime, through to his.” 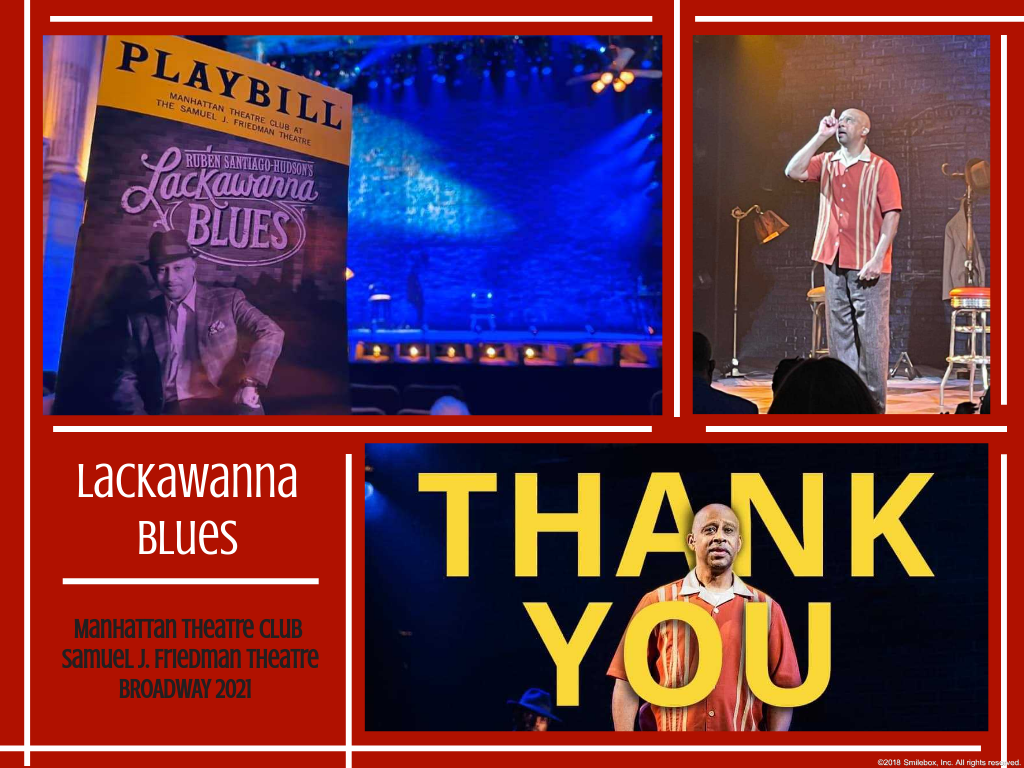 “Good day, my people. Nov 9-12th were my final 4 shows of LACKAWANNA BLUES. Closes Nov 12th. This production will never be done again. The play will not be published or licensed out. It’s just too precious to me, so thank you for understanding. To those who joined me for Nanny’s blessings on the journey “Thank You” I so appreciate you.” – Grateful, Ruben Santiago-Hudson 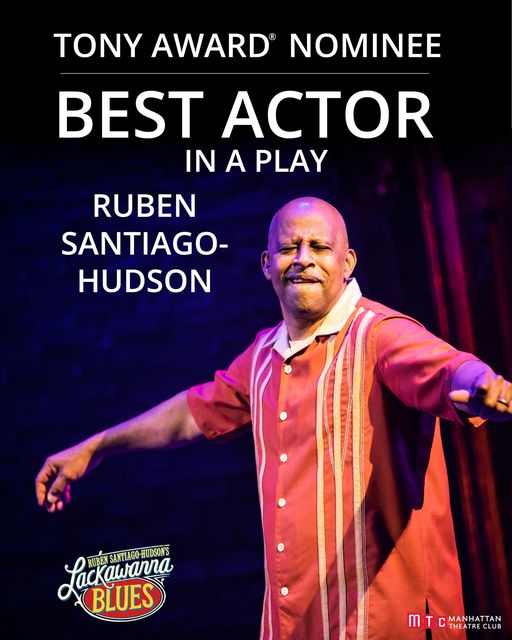