the Cowboys owner juked for decades” 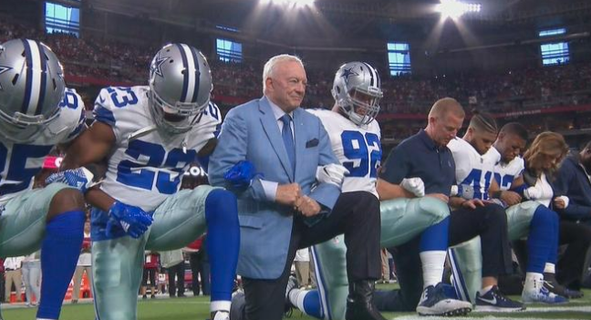 “On 9 September 1957, while a sophomore at Arkansas’ North Little Rock High, a mob of White boys blocked six Black students from entering the school – and Jones was in the crowd. This was three years after the Supreme Court struck down segregated schools. Also in September 1957, just across town, Little Rock Central High was grabbing headlines across the country as angry mobs and the state’s national guard put themselves between that school and another cohort of Black students – the Little Rock Nine.” 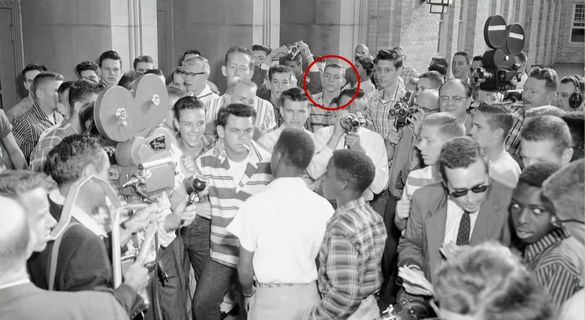 White students at North Little Rock High School block the doors of the school, denying access to six Black students in September 1957. Cowboys owner Jerry Jones is at the back of the crowd. Photograph: William P Straeter/AP A close up of the North Little Rock High School photo. Jerry Jones is in a horizontal striped shirt, to the right of the raised camera. Photograph: William P Straeter/AP

Repost from @blackstory1619
“…A 14-year-old Jerry Jones appears in a recently unearthed 1957 photograph showing a group of white students at North Little Rock High in Arkansas denying six African-American teenagers entry and integration into the school.
Jones, now known as the owner of the Dallas Cowboys, has admitted that it is he in the photo who was discovered by the police. The 80-year-old billionaire said he looked “like a little jerk” in the photo, which was taken amid a spate of civil rights clashes in the Little Rock area. More famously, President Dwight D. Eisenhower sent federal troops to Little Rock’s Central High in September 1957 to escort black students to class as they were harassed and spat on by racist, vicious protesters.
As Jones explained to the Post, his football coach, Jim Albright, had warned players to avoid the widely anticipated scene on the first day of class at North Little Rock High.
Jones disobeyed, but says he did so out of curiosity, not racial animosity.
Now when Colin Kaepernick first took a knee at the beginning of the 2016 season. The subject of kneeling remained mostly quiet for the better part of a year until President Trump raised the issue at the start the 2017 season. At that time, he suggested that NFL owners respond to the players by saying, “Get that son of a bitch off the field right now. He’s fired!” NFL owners did respond. Cowboys owner Jerry Jones, unsurprisingly, was one of the most vocal.”
“We cannot in any way give the implication that we tolerate disrespecting the flag,” Jones told the Dallas Morning News. “We know that there is a serious debate in this country about those issues, but there is no question in my mind, that the NFL and the Dallas Cowboys are going to stand up for the flag.”