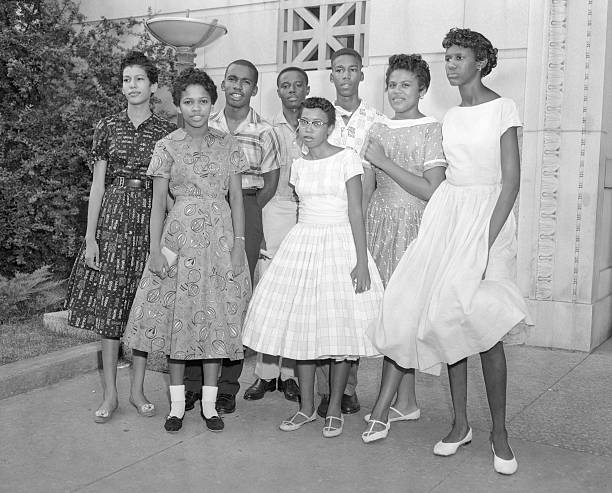 Early tonight, the 9 Negro students denied admission to Little Rock High School went to the Federal Building to sign depositions for the U.S. District Attorney. Their statements relate how they were turned away by National Guardsmen when they tried to register for classes following an order by the Federal district court that the school is integrated. Shown from left are Carlotta Walls, Gloria Ray, Ernest Green, Jefferson Thomas, Thelma Mothershed, Terrance Roberts, Minnie Brown, and Jane Hill. The ninth student is Elizabeth Echford, U.S. District Judge Ronald N. Davies. A scheduled hearing at the school board regarding a petition asking for an indefinite stay of execution of the integration order is scheduled. The student’s depositions are to be used in the course of the hearing. 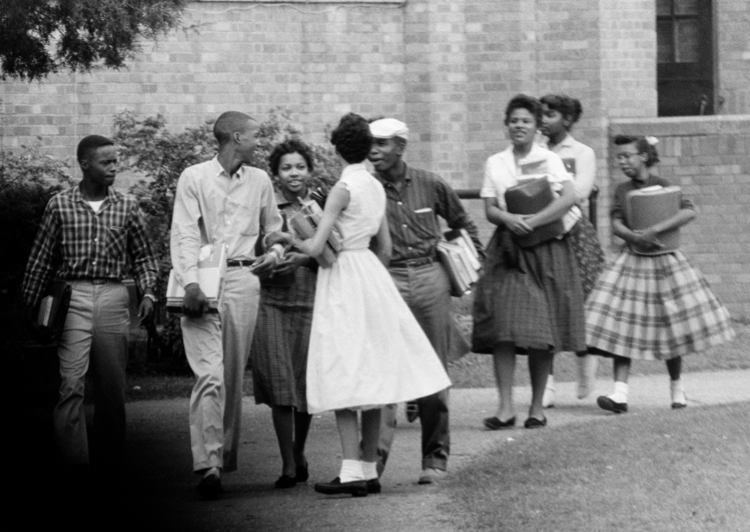 Eight of the nine black students who have been attending Central High School in Little Rock, Ark., are shown as they walked from school to their waiting Army station wagon, Oct. 2, 1957.
(AP Photo/Ferd Kaufman) 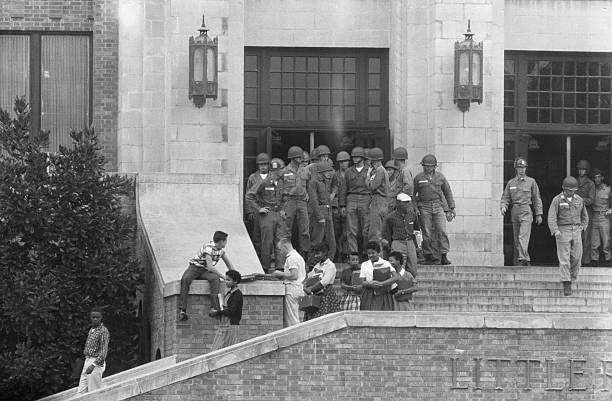 (Original Caption) 10/3/1957-Little Rock, AR – A heavy contingent of federalized Arkansas National Guard troops escort nine Negroes from Little Rock’s Central High School at the end of yesterday’s session. Reports of violence inside the school yesterday intensified the guard. Today, a demonstration flared up outside the school and the guardsmen seized an adult and a blonde white girl protesting the integration of Negro pupils. 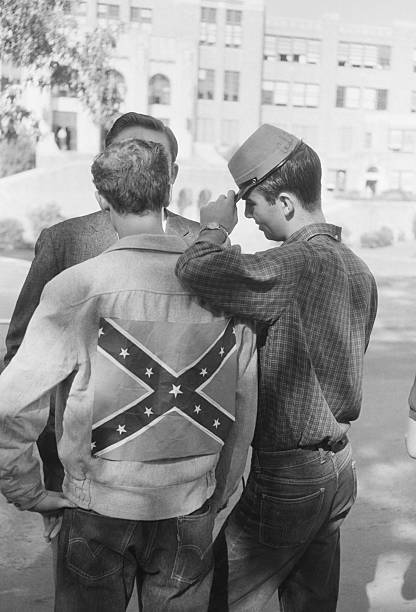 (Original Caption) 10/3/1957-Little Rock, AR: Adding historical color to their segregation struggle, two Little Rock Central High School students who participated in the “walkout” today wear a confederate flag and cap used during the civil war. After eight of the nine Negro students were escorted into the building this morning about 50 students staged a walkout from their classes. Two arrests were made during the brief demonstration. Federalized guardsmen quickly doused flames of a Negro figure the teenagers tried to burn in effigy. 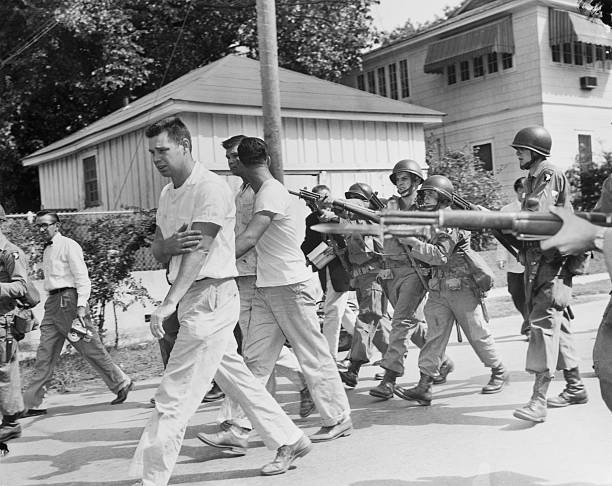 Three men from the mob around Little Rock’s Central High School are driven from the area at bayonet-point by these soldiers of the 101st Airborne Division on September 25th. The presence of the troops permitted the nine black students to enter the school with only minor background incidents. 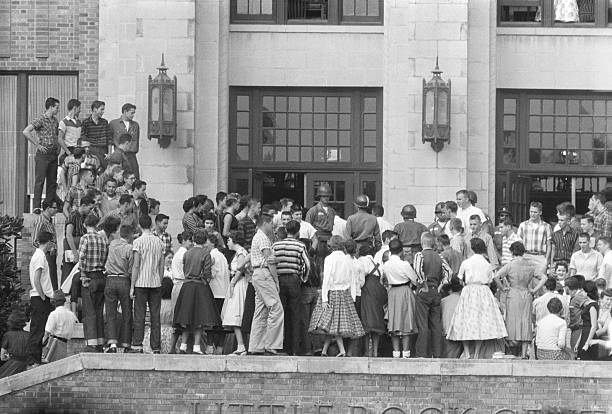 (Original Caption) 9/28/1957-Little Rock, AR: White students at the Little Rock Central High School cluster about the group of nine Negro students arriving at the school under an escort of paratroopers of the 101st Airborne division. The White students have no unfriendliness-just adolescent curiosity. 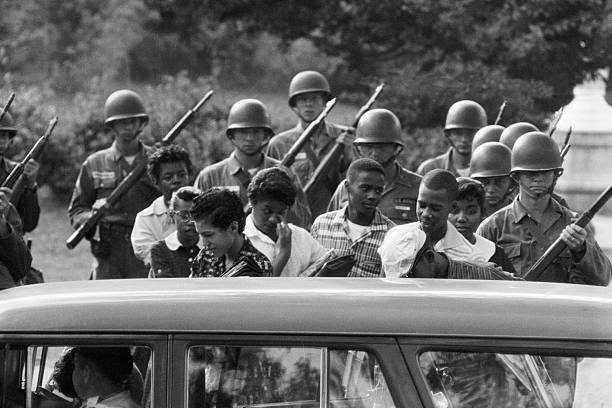 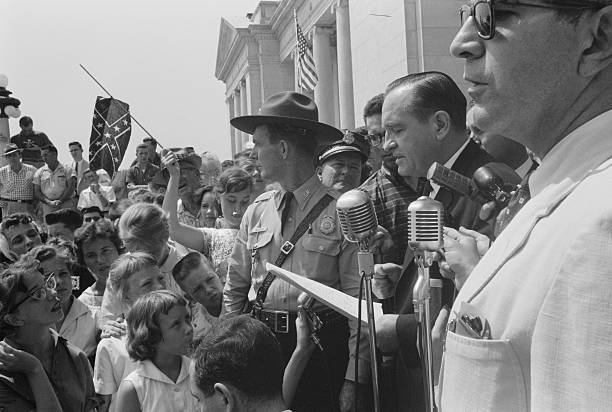 The UNITED STATES – CIRCA 1959: Group of people, one holding a Confederate flag, surrounding speakers and National Guard, protesting the admission of the “Little Rock Nine” to Central High School. (Photo by Buyenlarge/Getty Images) 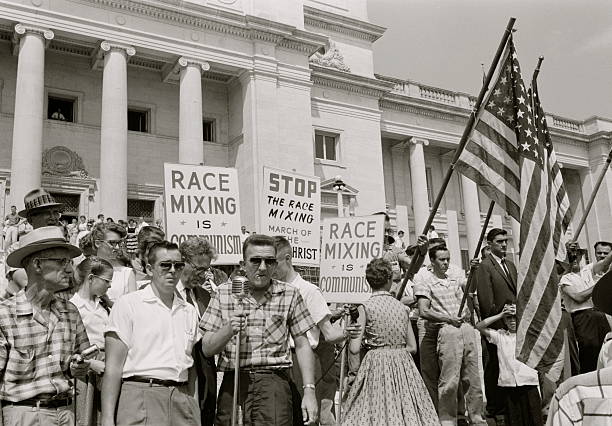 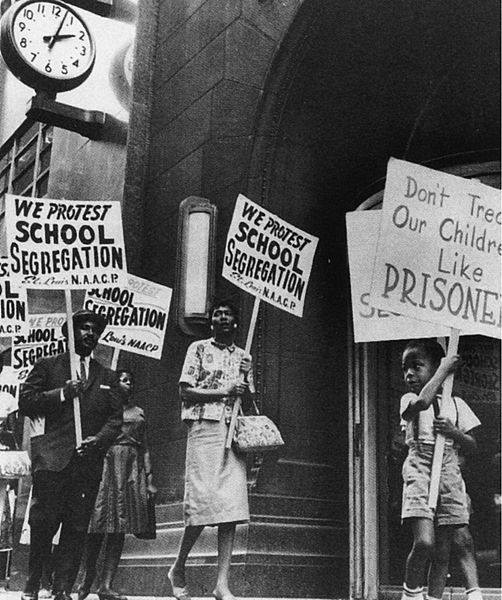 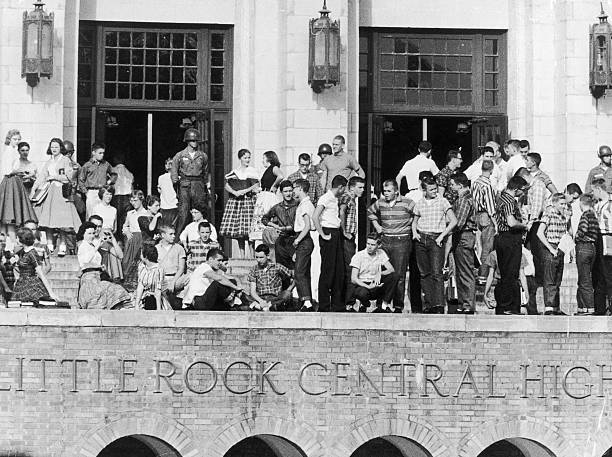 September 1957: A view of National Guardsmen standing outside Little Rock Central High School and a large group of White students standing with them to prevent any African-American students from entering, during the first year of the desegregation of public schools in Arkansas. Nine Black students were escorted into the school under federal protection later in the month. (Photo by Hulton Archive/Getty Images)

Anti-desegregations stand by as one of the numbers kicks Alex Wilson in the chest outside Little Rock Central High School, Little Rock, Arkansas, on September 23, 1957. A group of students known as the Little Rock Nine had attempted to enroll in the school and were initially prevented by Governor Orval Faubus who called on the National Guard to stop the school’s integration. (Photo by PhotoQuest/Getty Images) 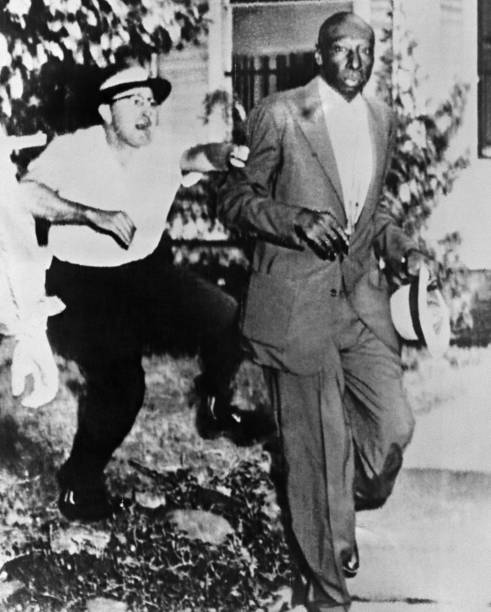 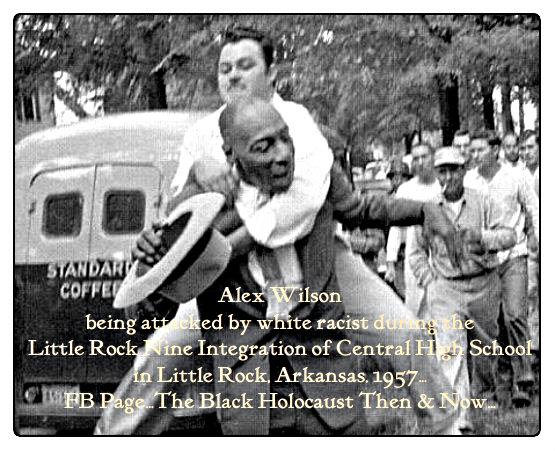 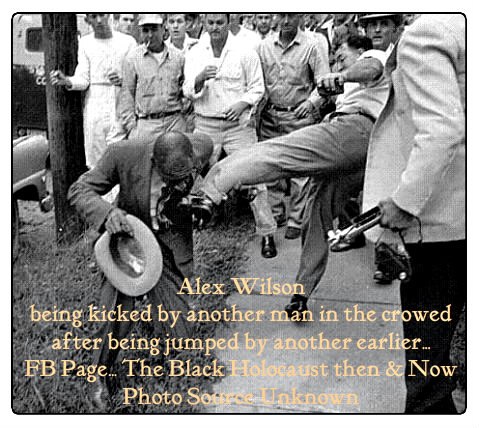 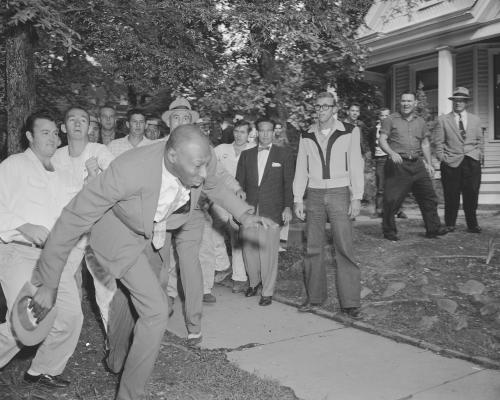 A reporter from the Tri-State Defender, Alex Wilson, is shoved by an angry mob of white people near Central High School in Little Rock, Ark., Sept. 23, 1957. The fight started when nine black students gained entrance to the school as the Army enforced integration. (AP Photo)

This historical event had a great impact on the country.  I could not imagine having to try to go to school and not being allowed in, or having threats made to me while walking into school.  These nine people have made me really reflect and place myself in their shoes.  They had enough courage and strength to enter the school and stay in school until it was closed, whereas many would have probably not even volunteered to go due to the situation during that time period and knowing the danger it would have brought to myself and my family. We should really respect and look up to these nine people for their courage. 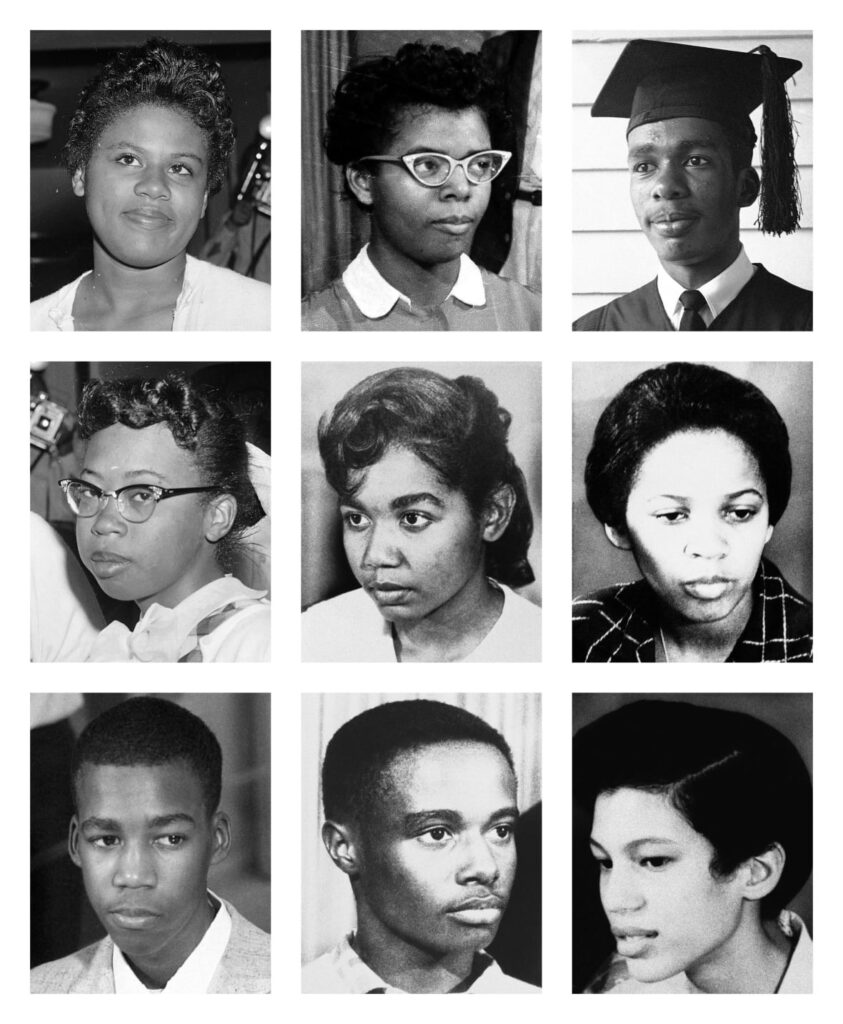 This combination of file photos shows the 9 black teenagers who had to be escorted by federal troops past an angry white mob and through the doors of Central High School in Little Rock, Arkansas, on Sept. 25, 1957. The top row from left are Minnie Brown, Elizabeth Eckford, and Ernest Green; middle row, Thelma Mothershed, Melba Pattillo, and Gloria Ray; bottom row, Terrence Roberts, Jefferson Thomas, and Carlotta Walls. (Associated Press/File)