“BIRMINGHAM, Ala. – Alabama granted posthumous pardons on Thursday to three of the Scottsboro Boys, a group of black teenagers whose fight against false charges that they raped two white women in 1931 helped initiate the modern civil rights movement.

The action by the Alabama Board of Pardons and Paroles clears the last of the Scottsboro boys who had yet to be exonerated: Charles Weems, Andy Wright, and Haywood Patterson. The three were among nine youths accused of gang-raping two women aboard a freight train in Alabama and convicted by all-white juries in the town of Scottsboro.

The group’s legal journey to fight the convictions and win new trials sparked protests over racial injustice and two landmark rulings by the U.S. Supreme Court.

“Today, we were able to undo a black eye that has been held over Alabama for many years,” said Eddie Cook, the board’s assistant executive director.

All of the Scottsboro Boys served prison time. Convictions against five of the teens were overturned and the charges dropped in 1937, according to the board.

Those five – Olen Montgomery, Ozie Powell, Willie Roberson, Eugene Williams, and Roy Wright – were ineligible for pardons because their cases were dropped, the board said.

A sixth man, Clarence Norris, got a pardon in 1976 from then-Governor George Wallace. Norris, the last surviving member of the group, died in 1989.

The U.S. Supreme Court twice overturned convictions for some of the Scottsboro Boys, first in 1932 on the grounds that the teens were denied their right to competent legal counsel, and again in 1935 because no African-Americans had been allowed to serve as jurors in their trials.

Earlier this year, Alabama lawmakers passed legislation aimed at allowing the parole board to grant posthumous pardons to the Scottsboro Boys. The measure required that the cases eligible for pardons have elements of racial and social injustice, Cook said.

“In this case, it broke all of those elements of injustice,” he said.

The group’s struggles have inspired a Broadway musical, books, and television movies. The Scottsboro Boys Museum and Cultural Center opened in 2010 in Scottsboro.

The parole board presented pardon certificates on Thursday to the museum’s executive director, Shelia Washington, who was among those who sought to have all the Scottsboro Boys declared innocent decades after their arrests.

She said the certificates will be put on display at the museum during a ceremony planned for December 21.

“It is a great day for freedom,” Washington said.”

“Though the others were finally free, they wore the label of being a “Scottsboro Boy” and suffered from psychological wounds inflicted during their years in prison and demons with which they had to contend.  They struggled with life in the hellholes of prison and on the outside as well.  As have the Central Park 5.”

“Nothing apparently has been learned from the past. The structure of inequality remains intact. The case of the “Scottsboro Boys” was recognized as a horrific travesty of justice, one that many assumed could never happen again. But U.S. history continues to be replete with similar cases. Both the Scottsboro and Central Park 5 stories are powerful reminders of what can happen when the justice system is manipulated, the truth is ignored, and racism dominates.“

The Central Park jogger case (events also referenced as the Central Park Five case) was a criminal case in the United States over the aggravated assault and rape of a white woman in Manhattan’s Central Park on April 19, 1989, occurring during a string of other attacks in the park the same night.

*
Five male youths were tried in two trials for the rape and violent assault of Trisha Meili whilst she was on an evening jog (the 6th made a plea deal in 1991 for a lesser charge and had a lesser sentence). Four of the five in the Meili case were convicted in 1990 of rape, assault, and other charges; one of these was convicted of attempted murder; one was convicted on lesser charges but as an adult. The other five defendants pleaded guilty to assault before trial and received lesser sentences. 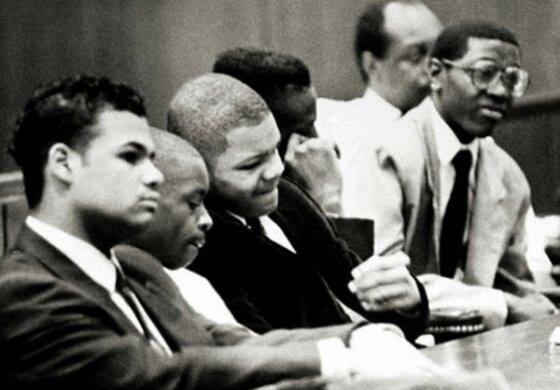 Six youths were indicted with attempted murder and other charges in the attack on and rape of the female jogger, and additional charges related to the attack of David Lewis, the attack and robbery of John Loughlin, and riot:

Guilty; sentences ranged from 5–10 years for four juveniles, and 5–15 years for a 16-year-old who was classified as an adult because of the violent nature of the crime.

Four of the teenagers in the Meili case served 6–7 years in juvenile facilities; one, sentenced as an adult, served 13 years. Four unsuccessfully appealed their convictions in 1991.
After another man was identified as the rapist in 2002, these five convictions were vacated, and the state withdrew all charges against the men.

The five men sued the city for discrimination and emotional distress; the city settled in 2014 for $41 million. They also sued New York State, which settled in 2016 for $3.9 million total.

THE CENTRAL PARK FIVE, THE SCOTTSBORO BOYS, AND THE MYTH OF THE BESTIAL BLACKMAN

That Justice is a blind goddess
Is a thing to which we Blacks are wise: Her bandage hides two festering sores That once perhaps were eyes.
– Langston Hughes 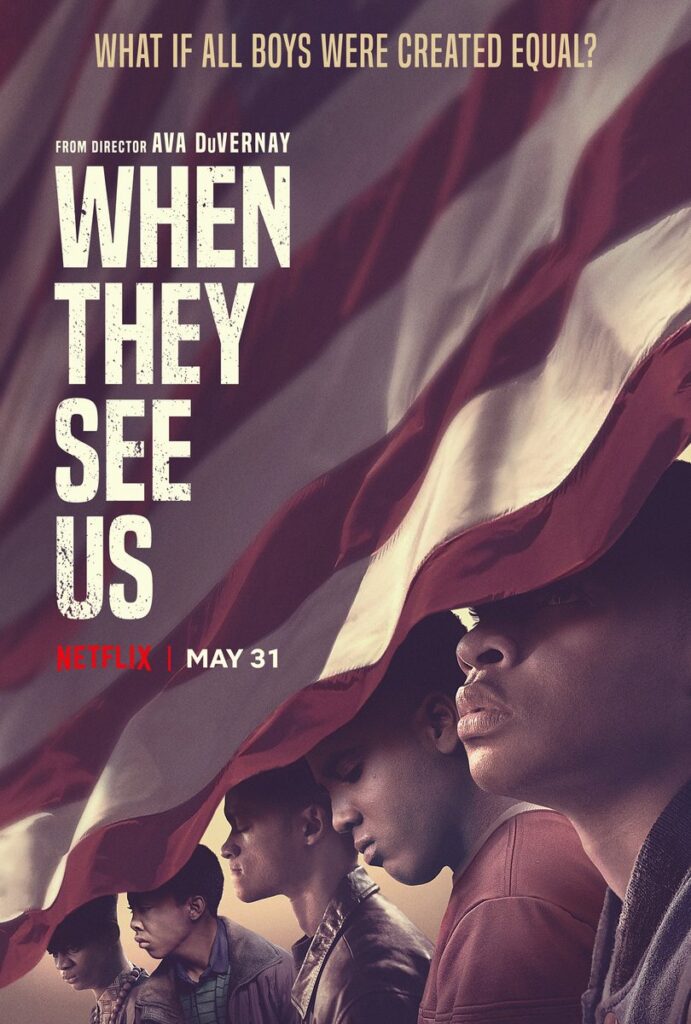 In 1989 a jogger was assaulted and raped in New York’s Central Park, and five young people were subsequently charged with the crime. The quintet labeled the Central Park Five, maintained its innocence, and spent years fighting the convictions, hoping to be exonerated. This limited series spans a quarter of a century, from when the teens are first questioned about the incident in the spring of 1989, going through their exoneration in 2002, and ultimately the settlement reached with the city of New York in 2014. The cast is full of Emmy nominees and winners, including Michael K. Williams, John Leguizamo, Felicity Huffman, and Blair Underwood. Oscar nominee and Emmy winner Ava DuVernay co-wrote and directed the four episodes.
Original release: May 31, 2019
Production companies: Harpo Films; Tribeca Productions; ARRAY; Participant Media
Director: Ava DuVernay