What: The Scottsboro Trials 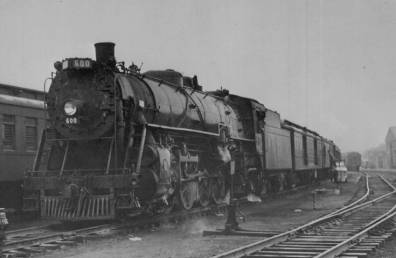 On the day of March 25, 1931, several different people had hoboed, a train; the Southern Railroad’s Chattanooga Freight train to Memphis, Tennessee. The events that would take place on this train would forever change the lives of nine Black boys, and two White girls. 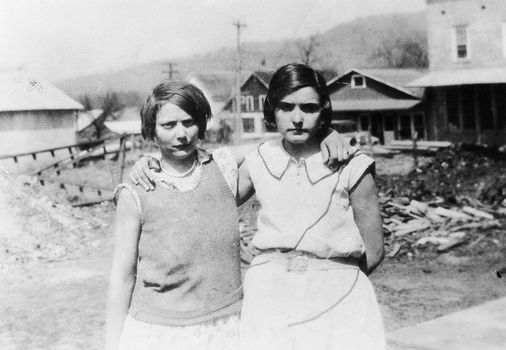 The group of boys would get in a fight with a smaller number of White boys, who had actually started the fierce interaction, as they crossed into Alabama from Georgia. The White boys would be kicked off by the Black boys the train as it was gradually picking up speed, to later go to the stationmaster and tell what had happened on the train; one White boy was pulled back on the train by one of the Black boys, as the train was going too fast and would have killed him if he had fallen from it. The stationmaster wired ahead and had the train stopped by a posse, body of armed men, in Paint Rock, Alabama. The boys would be tied up and taken to jail; while Victoria Price and Ruby Bates, Huntsville millworkers, would tell one of the posse members that they had been raped by the nine Black boys, to try to keep from being caught for prostitution. The nine would be locked up in a jail in Scottsboro, Alabama, which would be how they garnered their name “The Scottsboro Boys.” Olen Montgomery, born in Georgia, educated up to the fifth grade, was 17 at the time of his arrest. He stuck consistently to his story in court and was released in 1937. During his six years of incarceration, he asked frequently for “six-string guitars and money to buy a night with a woman” (“Biographies of the Scottsboro Boys”). None of his dreams to become a musician came true, and Montgomery ended up settling for good in Georgia. Clarence Norris
Norris died at age 76, the last of the Scottsboro Boys. He was born the second oldest of eleven siblings in Georgia and went to school only up to second grade before he began working in the cotton fields. When he was accused of rape, he immediately thought he “was as good as dead” (“Biographies of the Scottsboro Boys”). He was beaten into testifying against the other blacks during his trials. He was paroled twice in prison – the first time, he moved to New York in violation of his parole and was jailed again. Two years later, in 1946, he has paroled again, where he got a job for three years before once more moving to New York City. Haywood was born in Elberton, Georgia, the fourth of nine living children to sharecroppers Claude and Janie. He was devoted to his parents and was especially close to his mother. He left school in the third grade to work as a delivery boy. With his parents having so many mouths to feed, Haywood ate meals away from home as much as possible and eventually left home at fourteen. He hopped freight trains from Ohio to Florida looking for work and was on his way from Chattanooga to work as a steelworker when he was arrested. After he was in jail he regretted not paying more attention in school. Using a Bible and a dictionary, he taught himself to read and write in eight months. Powell was 16 at the time, with an IQ measured at “64-plus” (“Biographies of the Scottsboro Boys”) and could write only his name. He had only one year of schooling in Georgia. He was “quiet, shy, and bashful.” After testifying at Haywood Patterson’s fourth trial, Powell was shot in the head after an “escape attempt” (“Biographies of the Scottsboro Boys”). The bullet lodged in his brain and Powell barely survived, suffering permanent brain damage. He was released in 1946 and moved back to Georgia.
When Willie Roberson, at 17, allegedly raped Bates aboard the train, he was suffering a “serious case of syphilis,” (Linder) which would’ve made intercourse extremely uncomfortable. Roberson could not even walk without a cane. Nonetheless, he was prosecuted and convicted. He was released in 1937 when he moved to New York City and found steady work. Charlie Weems- age 19Charles Weems, at 19 years old, was the oldest of the Scottsboro Boys when he was arrested. He had a difficult childhood, with his mother passing away when he was four and only one of his seven other siblings surviving to adulthood. He was educated only up to the fifth grade before he began to work.  Prison life did not suit Weems either. He “complained about being half-fed,” (“Biographies of the Scottsboro Boys”) and felt cheated out of his freedom. 3 years after his arrest, Charles was beaten and tear-gassed, causing permanent eye injuries, for reading Communist literature that he had been sent. In 1937 he contracted tuberculosis, and in 1938 he was stabbed by a prison guard. After he was released in 1943, Weems returned to Atlanta, married, and got a job. Williams was thirteen when he was arrested. He was described as “a sullen, shifty mulatto” (“Biographies of the Scottsboro Boys”). He was released in 1937 and eventually moved to St. Louis. Andy Wright was 19, older brother to Scottsboro Boy Roy Wright when he was arrested. He excelled in school until the sixth grade when his father passed away and he quit in order to help his mother support his family. He had a steady job driving a truck for a produce distributor for seven years until the company learned of his age and raised rates. In prison, Wright was “frequently ill and depressed…mistrustful, something of a loner, and [had] a mean streak” (“Verdict Is Announced in Scottsboro Case”). He was paroled in 1944, married, violated his parole, and was returned to prison for 4 years. He left prison for good in 1950, the last Scottsboro Boy to be released. Roy Wright was twelve when he was arrested, the youngest of the Scottsboro Boys. He was threatened and beaten into testifying against the other boys during the first trials in Scottsboro. Wright kept “a Bible with him at all times in jail,” (“Biographies of the
Scottsboro Boys”) where he went over a year without breathing fresh air. He was released in 1937, served in the army, married, and took a job with the merchant marine. In 1959, Wright became convinced that his wife had cheated on him and killed his wife before committing suicide. 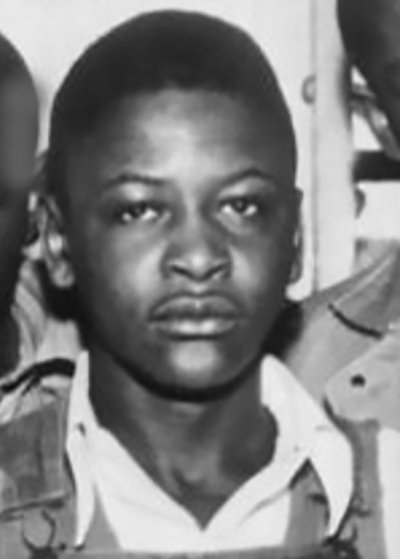 Leroy (Roy) was the youngest of the Scottsboro Boys. He had four years of school before he dropped out to work in a grocery store. When he hopped the train with his brother Andy, it was his first time away from home. In prison, Roy liked to read and kept his Bible with him at all times. However, he thought that magazines would be the ruination of his mind.

Price was 21 when she was ‘raped’ aboard the train in 1931. She was described as “promiscuous, hard-drinking, [and] hard swearing” (“Victoria Price”). An ex-neighbor of Price said she was a “common street prostitute of the lowest type who would be out at all hours of the night” (“Victoria Price”).

Ruby Bates was the daughter of a prostitute and a drunk who beat her. When her father was jailed for horse-whipping her brother, the family moved to Huntsville. Bates was frequently said to be a “notorious prostitute… [who]often had negro men in her room all night” (“Judge James E. Horton”). 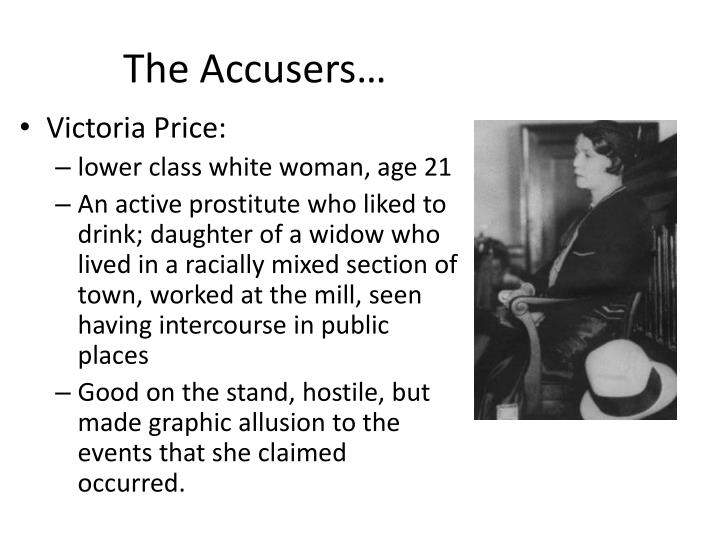 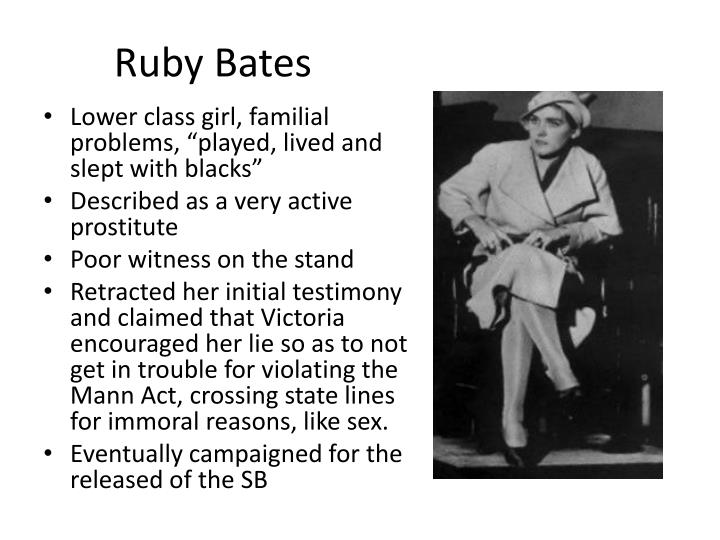 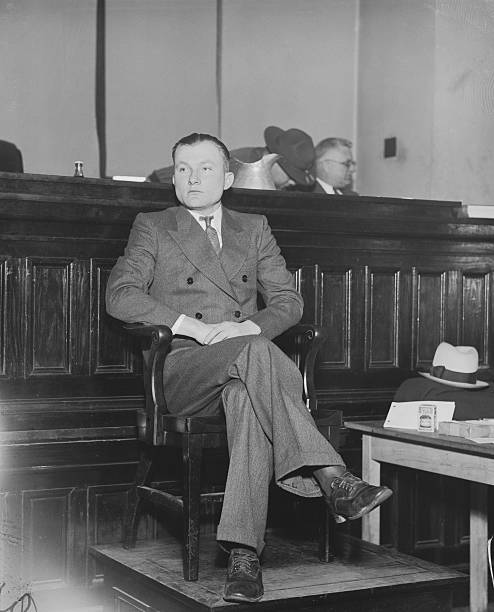 (Original Caption) Lester Carter, one of the boys who is reported to have accompanied the two white girls on the freight train where they said they were attacked by the seven Scottsboro Negroes, is seen here on the stand as he testified during the trial of the Negroes in Decatur, Alabama. 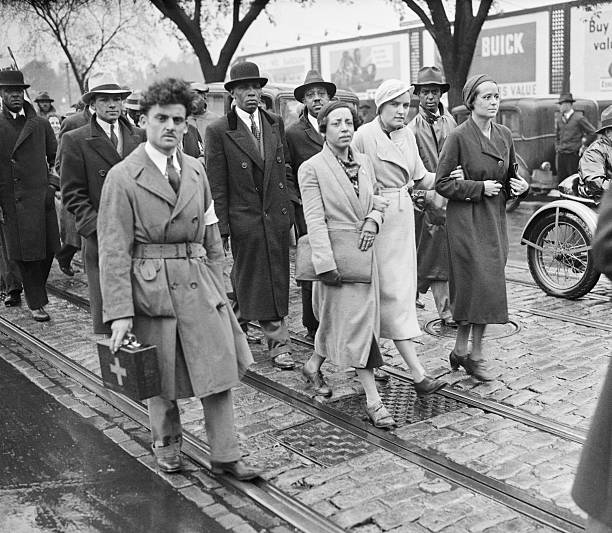 The courtroom was suddenly and dramatically surprised in Decatur, Alabama, during the trial of the famous “Scottsboro Case”, when Ruby Bates, one of the “Victims” of the seven Negro youths, who had been missing, testified that she had not been attacked and that to the best of her knowledge, Victoria Price, the other “Victim” had not been assaulted either. 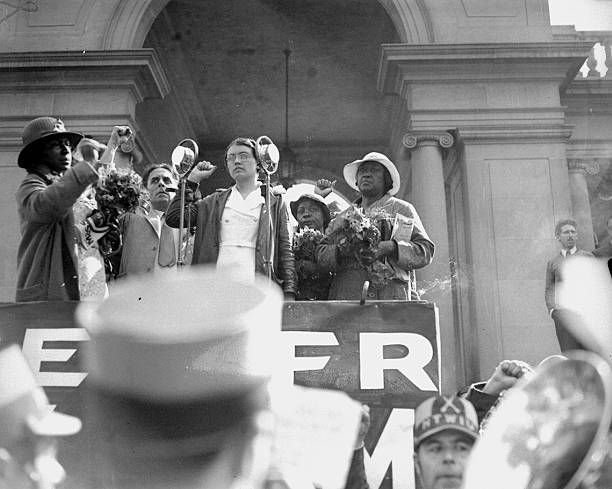 UNITED STATES – MAY 01: Ruby Bates, recanting witness in the famous Scottsboro case, addresses a gigantic meeting in Union Square. Mothers of some of the Scottsboro boys are on the stand. (Photo by NY Daily News Archive via Getty Images) 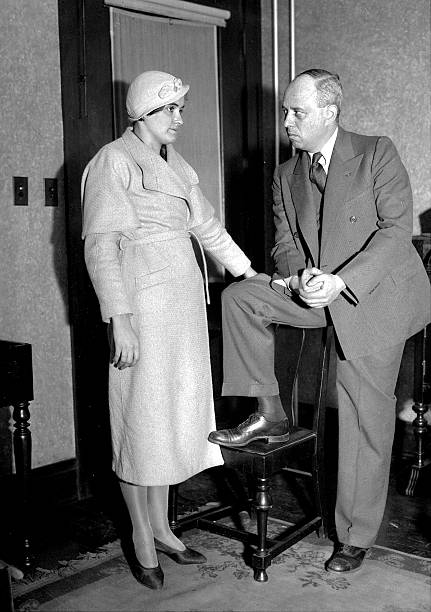