The Scottsboro Trials Live On 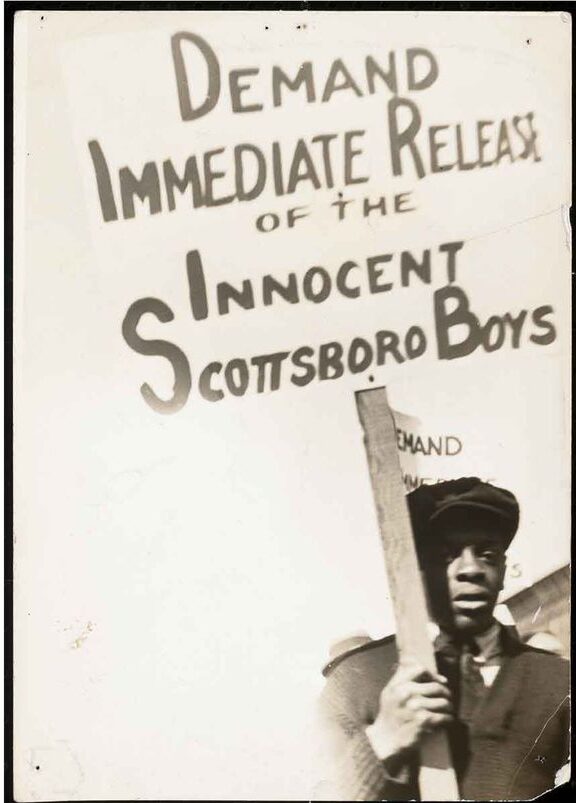 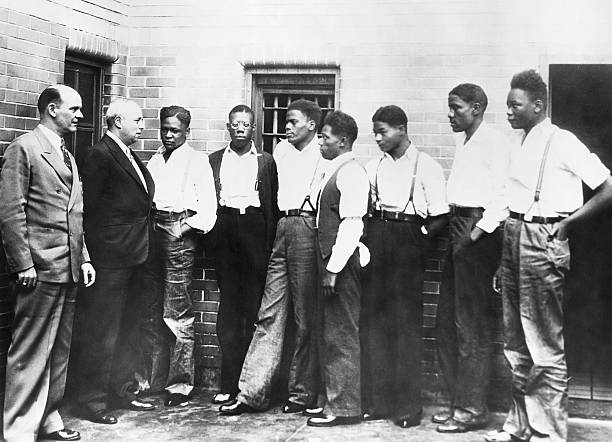 (Original Caption) The Scottsboro Case Defendants are shown with one of their attorneys, Samuel Leibowitz of New York (second from left), at a Jefferson, Alabama, jail. 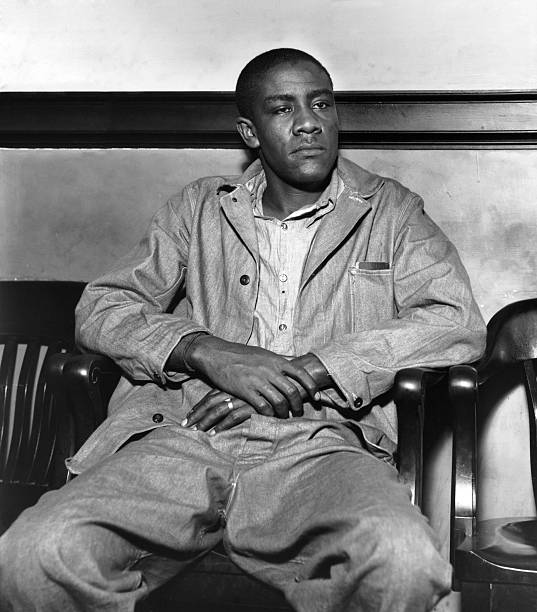 (Original Caption) Next to Be Tried in Scottsboro Case. Charlie Weems, the next colored youth of the famous Scottsboro case to go on trial, is seen above at Decatur, Ala., where the sessions are being held. Heywood Patterson, first of seven negroes, was convicted and sentenced to death. 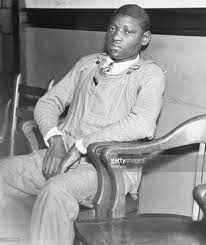 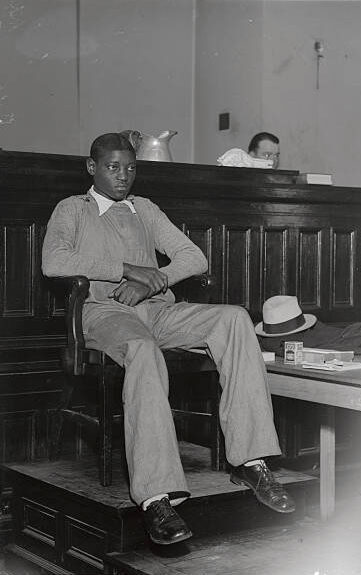 (Original Caption) The courtroom was suddenly and dramatically surprised in Decatur, Alabama, during the trial of the famous “Scottsboro Case”, when Ruby Bates, one of the “Victims” of the seven Negro youths, who had been missing, testified that she had not been attacked and that to the best of her knowledge, Victoria Price, the other “Victim” had not been assaulted either. This photo shows Heywood Patterson, the first of the seven to be retired, on the witness stand.

“Convicted and facing execution, the case of Charlie Weems, Ozie Powell, Clarence Norris, Olen Montgomery, Willie Roberson, Haywood Patterson, Eugene Williams, and Andrew and Leroy Wright sparked international demonstrations and succeeded in both highlighting the racism of the American legal system and in overturning the conviction.

On March 25, 1931, nine unemployed young Black men, illegally riding the rails and looking for work, were taken off a freight train at Scottsboro, Alabama, and held on a minor charge. The Scottsboro deputies found two White women, Ruby Bates and Victoria Price, and pressured them into accusing the nine youths of raping them on board the train. The charge of raping White women was an explosive accusation, and within two weeks the Scottsboro Boys were convicted and eight sentenced to death, the youngest, Leroy Wright at age 13, to life imprisonment. 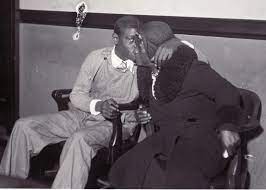 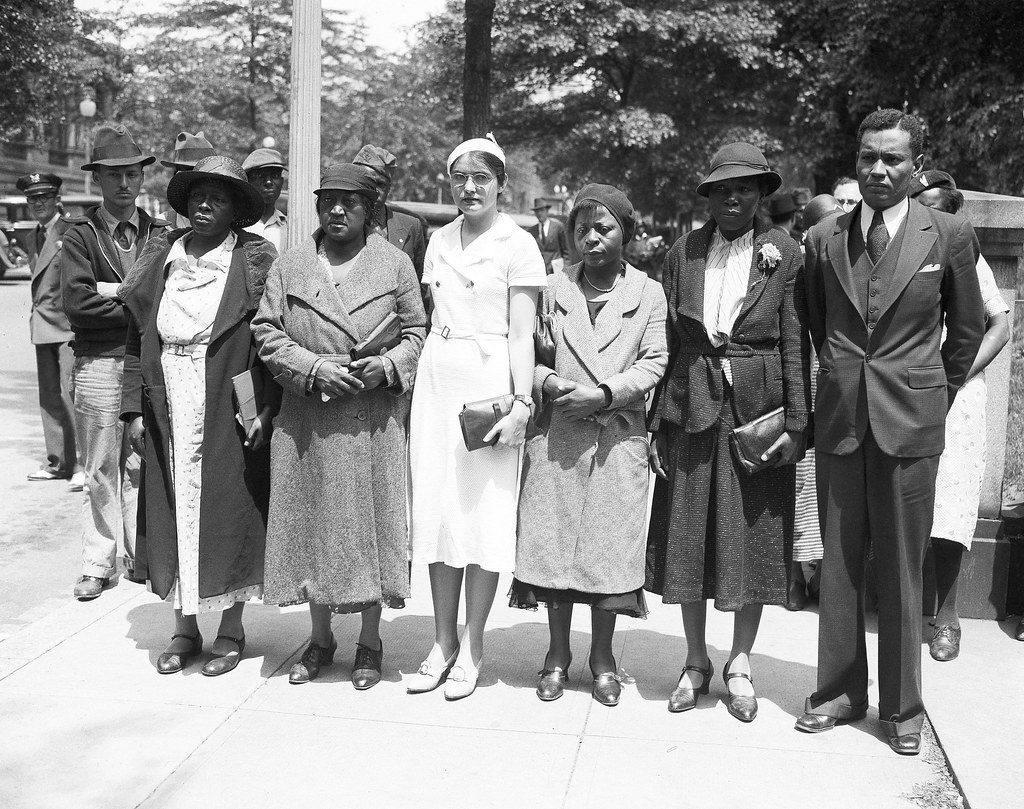 Four of them are pictured with Ruby Bates, one of the women alleged to have been attacked, by the Black youths, and Richard B. Moore, member of the Executive Committee Of The International Labor Defense.

A secretary met briefly with the group but informed them that it was impossible for the President to receive the group or to intervene.

The mothers had spoken at churches that Sunday morning, was refused an audience at the White House in the afternoon, and spoke at a rally at the Phyllis Wheatley YWCA that evening. Josephine Powell, another mother, also made the trip to Washington, but became ill and was unable to speak.

At the YWCA rally, Patterson, whose son had three times been sentenced to die in the electric chair, told the crowd, “The President wouldn’t see me and he is supposed to be my President too.”

Viola Montgomery, the mother of defendant Olen Montgomery, stated, “If a colored woman had been attacked by white men, nothing would have been done.”

The women spent the night at the YWCA and went back to the White House the following day and were received by the President’s representatives.

The photographer is unknown. The image is an Associated Press photograph. 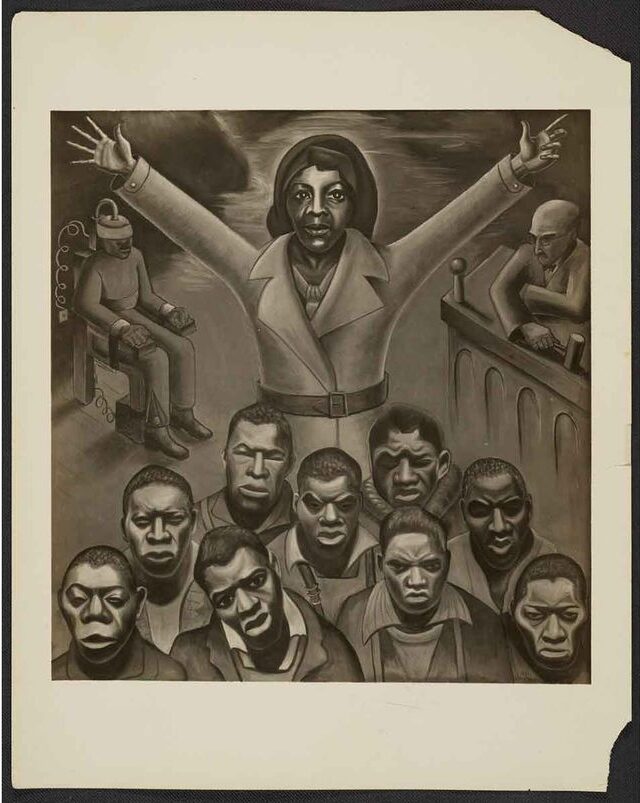 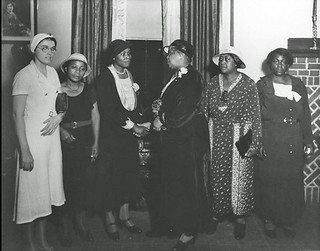 Scottsboro Boys’ Mothers: 1934
Four Scottsboro mothers at the Phyllis Wheatley YWCA, 901 Rhode Island Avenue NW, Washington, DC on May 13, 1934.
From left to right: Ruby Bates (accuser who recanted), Mamie Williams Wilcox, Viola Montgomery, Julia West Hamilton (president of Phyllis Wheatley YWCA), Janie Patterson, and Ida Norris.
The mothers had spoken at churches that Sunday morning, was refused an audience at the White House in the afternoon, and spoke at a rally at the Phyllis Wheatley YWCA that evening. Josephine Powell also made the trip to Washington, but became ill and was unable to speak.
Hamilton presided over the rally that hundreds attended.
Patterson, whose son had three times been sentenced to die in the electric chair, told the crowd, “The President wouldn’t see me and he is supposed to be my President too.”
Viola Montgomery, the mother of defendant Olen Montgomery, stated, “If a colored woman had been attacked by white men, nothing would have been done.”
Ida Norris, the mother of Clarence Norris, praised the Communist Party-organized International Labor Defense organization, “If it hadn’t been for them, our boys would have been electrocuted or lynched long ago. If you are ever going to vote, vote nothing but the Communist ticket. Support the Communists and the International Labor Defense.”
The women spent the night at the YWCA and went back to the White House the following day and were received by the President’s representatives.
For an article on the Scottsboro marches and rallies in Washington, see washingtonspark.wordpress.com/2013/02/19/scottsboro-boys-…
For more images related to the Scottsboro campaign in Washington, see flic.kr/s/aHsjE3vopE
Photo: Addison Scurlock, courtesy of the Archives Center at the Smithsonian National Museum of American History. Photo identifications from The Afro American, May 19, 193 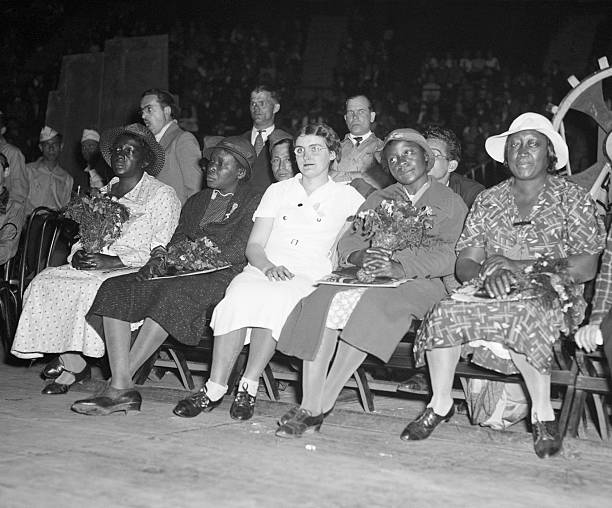 Among the individual letters, particularly heartrending is one from Viola Montgomery, the mother of Olen Montgomery, one of the defendants, writing to Governor Miller to plead with him for a retrial for her son. “I love my son just like your mother loves you,” she writes. “So I will ask you, Please have Mersey [mercy] on our Boys.” Sometimes Governor Miller responded, as with his letter to Rev. Harry Emerson Fosdick of Riverside Church in Manhattan, a congregation long associated with liberal activism in New York.

Vitriolic letters were not limited by region. Mail from those who sought the men’s execution came not only from within Alabama, but also from other states, such as one from Glenwood, Iowa, calling on the governor to hang the defendants in order to continue the “ethical fight for the purity of the white race, segregation, and white race supremacy.” 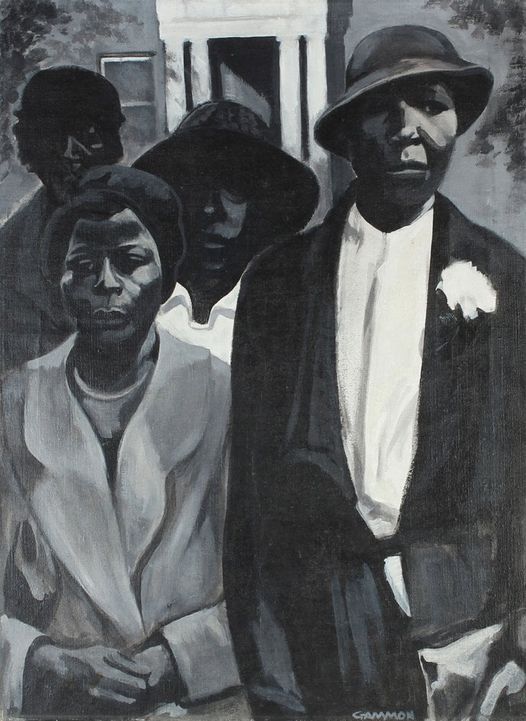 Although initially hostile to the Communists and wary of being involved in the touchy issue of Black men raping White women, the National Association for the Advancement of Colored People (NAACP) ultimately joined with the CP and other civil rights organizations to form the Scottsboro Defense Committee. Eventually, one of the white women, Ruby Bates, came forward to repudiate her testimony, acknowledging that she and Price had been pressured into falsely accusing the Scottsboro Boys, and she became part of the campaign to save their lives. 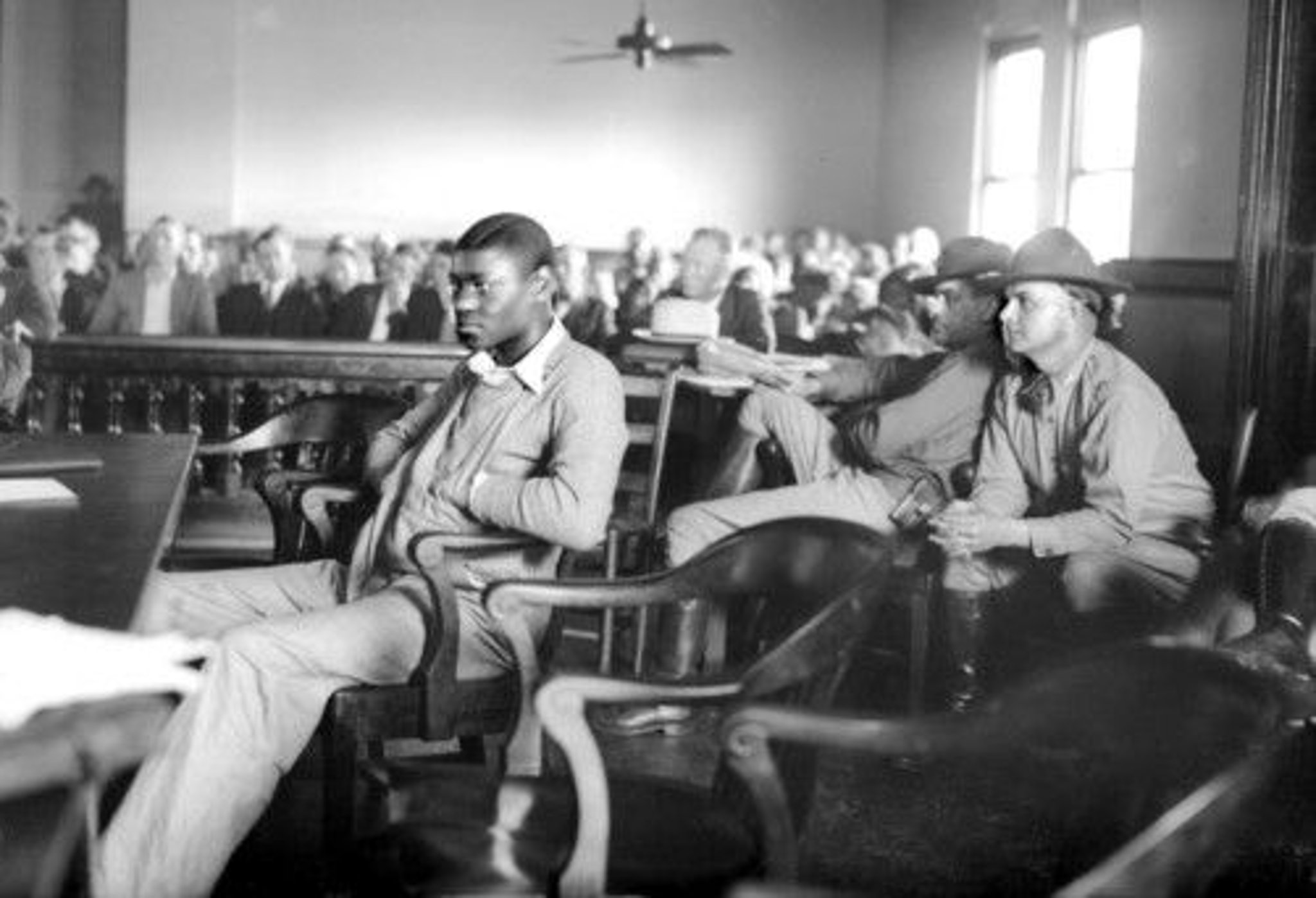 Hayword Patterson at his retrial. He was pardoned yesterday by Alabama’s parole board. Picture: Getty 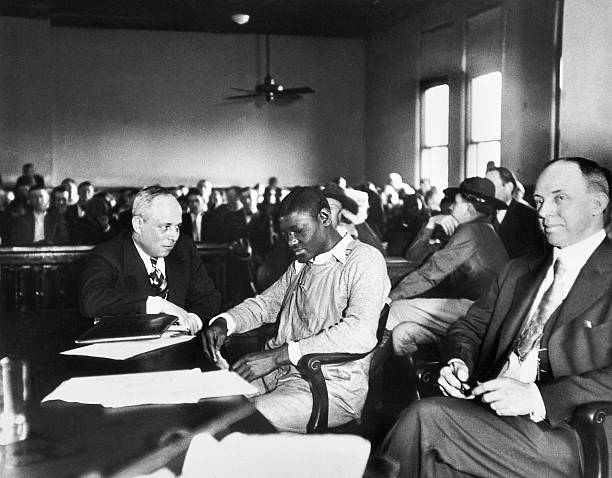 (Original Caption) 4/1/1933-Decatur, Alabama-: Samuel Liebowitz (left) prominent New York attorney who is defending the seven Scottsboro Negroes who are charged with attacking two white women, is seen here with Heywood Patterson, one of the Negroes. During preliminary ceremonies in Morgan County courthouse in Decatur, Alabama. At right is attorney Chamlee, one of the defense counsel. 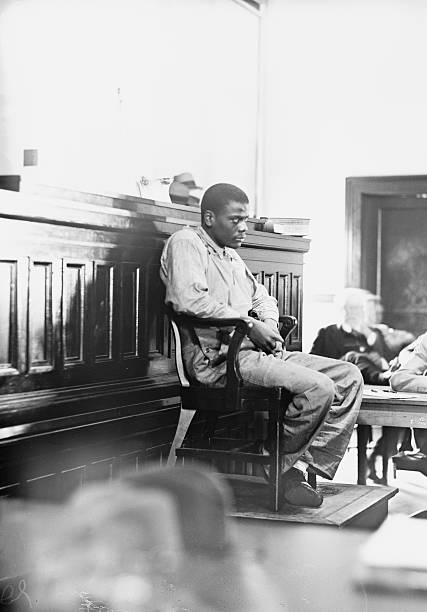 (Original Caption) Ozzie Powell, one of the seven Scottsboro Negroes who are being retried on the charges of attacking two white girls, is seen here on the stand as he testified during the trial in Decatur, Alabama. Powell will later be tried alone. Heywood Patterson, another of the seven, is now being tried. 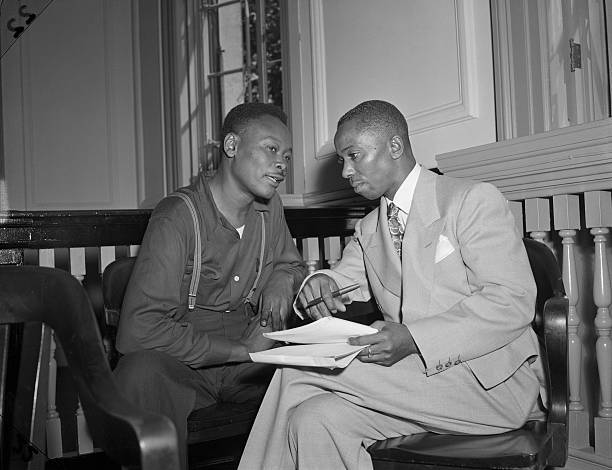 (Original Caption) James Andrew Wright, 39 (left), one of the defendants in the famed Scottsboro rape case, confers with his New York City attorney, Jawn A. Sandifer (right), in an Albany courtroom, July 19th. Wright is charged with first-degree rape.

“The case went to the United States Supreme Court in 1937, and the lives of the nine were saved, though it was almost 20 years before the last defendant was freed from prison. The trial of the Scottsboro Boys is perhaps one of the proudest moments of American radicalism, in which a mass movement of Blacks and Whites—led by Communists and radicals—successfully beat the Jim Crow legal system.” – JESSIE KINDIG (BLACKPAST.ORG)

“During the 1930s, at the time of the Scottsboro Boys’ trial, racial segregation was popular. Racial segregation was a social arrangement born from the desire of Whites to keep African Americans in “a subordinate status” (“Segregation, Freedom’s Story”) by not allowing them equal access to public facilities and ensuring that they lived separately from the Whites.
During the era of slavery, free Blacks, mostly in cities and towns in the North, experienced segregation in many forms. By the time the Supreme Court ruled that “African Americans were not U.S. citizens” (“Segregation, Freedom’s Story”) in Dred v. Sanford, northern White Americans had denied African Americans entry to most hotels, restaurants, and places on public transportation. Churches, schools, auditoriums, and theaters were segregated as well.“

Info on the time period:

“The Great Depression was a severe worldwide economic depression that took place mostly during the 1930s, beginning in the United States. The timing of the Great Depression varied across the world; in most countries, it started in 1929 and lasted until the late 1930s.”

“The Great Depression had devastating effects on both rich and poor countries. Personal income, tax revenue, profits, and prices dropped, while international trade fell by more than 50%. Unemployment in the U.S. rose to 23% and in some countries rose as high as 33%.” 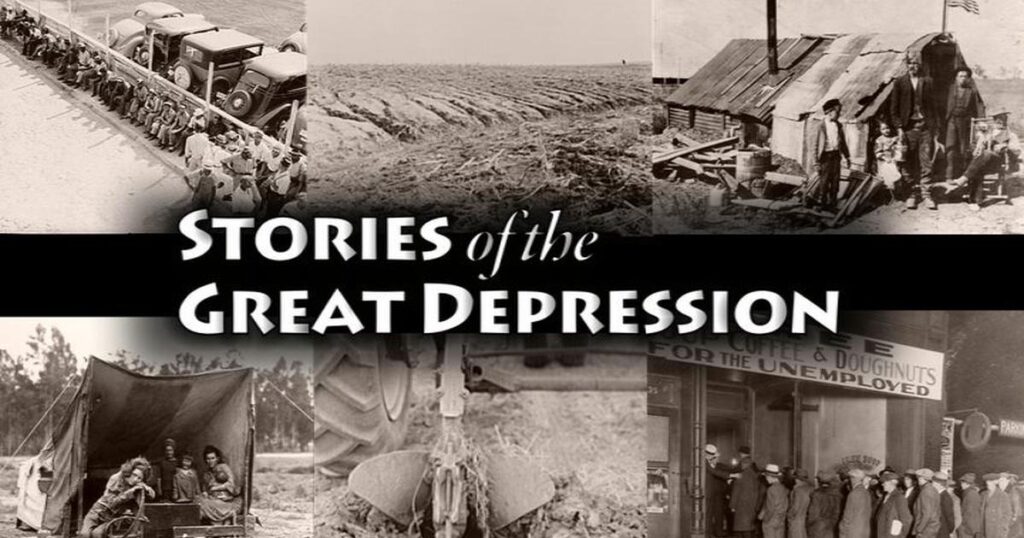 “The New Deal was a series of economic programs implemented in the United States between 1933 and 1936. They were passed by the U.S. Congress during the first term of President Franklin D. Roosevelt. The programs were Roosevelt’s responses to the Great Depression and focused on what historians call the “3 Rs”: Relief, Recovery, and Reform. That is, Relief for the unemployed and poor; Recovery of the economy to normal levels; and Reform of the financial system to prevent a repeat depression” (“The New Deal”) 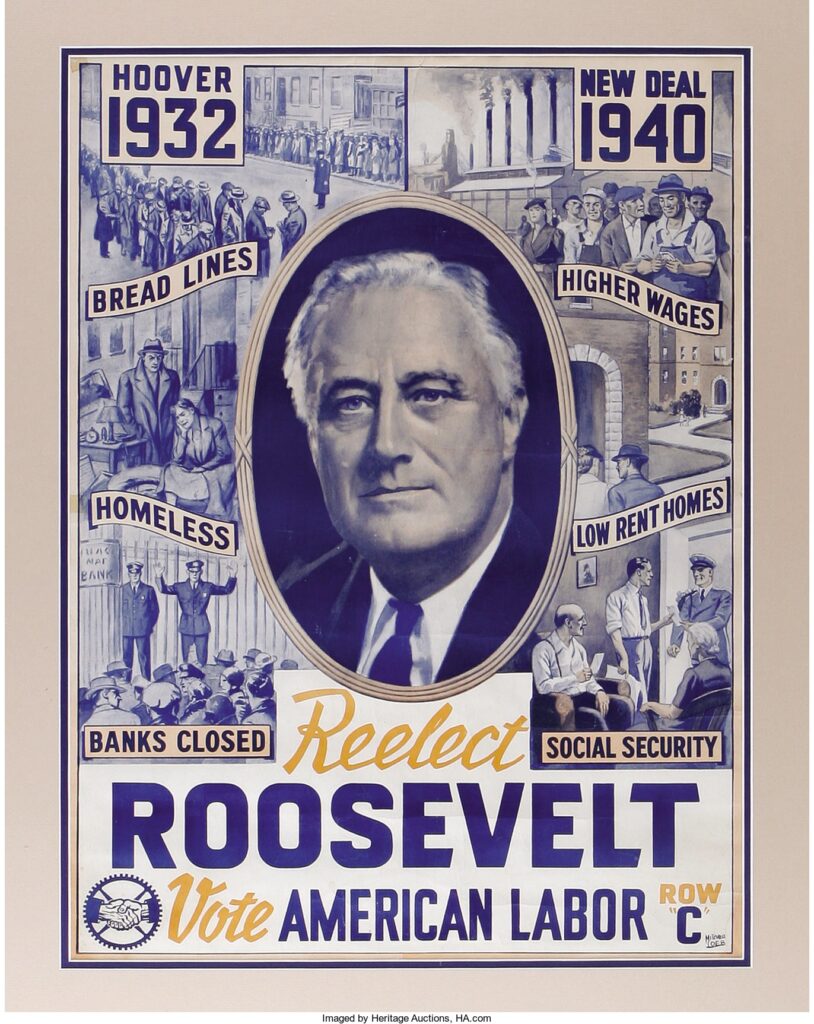 Hitler’s emergence as chancellor on January 30, 1933, marked a crucial turning point for Germany and, ultimately, for the world. His plan, embraced by much of the German population, was to do away with politics and make Germany a powerful, unified one-party state. He began immediately, ordering a rapid expansion of the state police, the Gestapo, and putting Hermann Goering in charge of a new security force, composed entirely of Nazis and dedicated to stamping out whatever opposition to his party might arise. From that moment on, Nazi Germany was off and running, and there was little Hindenburg or von Papen—or anyone—could do to stop it. 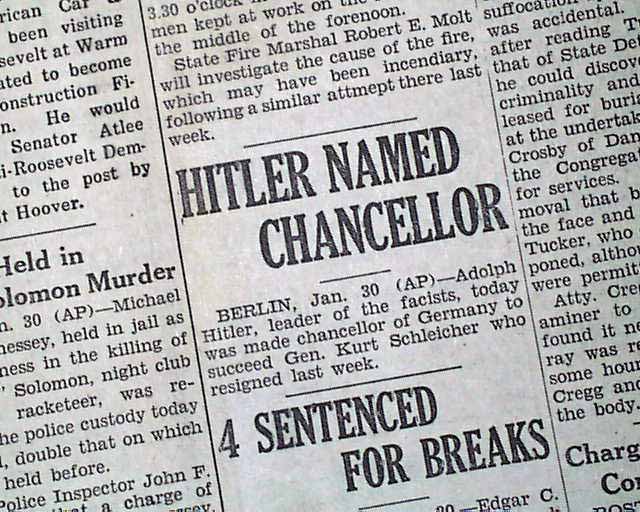 The American Communist Party (CP), in this period at the height of its organizing focus in the American South against racism and economic exploitation, immediately took the case on, and largely through activist efforts, sparked a mass defense movement. The CP brought in their legal arm, the International Labor Defense (ILD) to represent the nine. After two trials in which an all-White jury, fueled by a biased Alabama press, convicted the nine, the ILD and the CP began a national protest campaign to overturn the conviction, marked by numerous street marches, national and international speaking tours, and popular songs. Because of their principled leadership in the campaign, the CP gained widespread respect among African Americans and civil rights activists. When they traveled to Washington, D.C. to demonstrate, the CP stopped at segregated restaurants to stage sit-ins against discrimination, helping to turn the campaign into a trial of the system of segregation and racism in America, presaging the sit-in tactics of the 1960s civil rights movement. 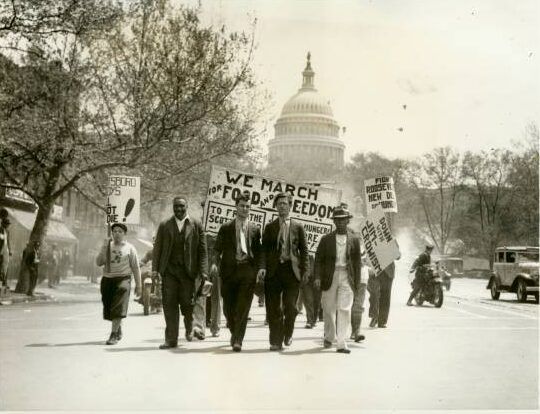 Photograph of a Communist parade in Washington, D.C Banners include: ‘We march for food and freedom;to free the Scottsboro boys;[…] hunger […]’, ‘Fight Roosevelt’s new deal of hunger’, ‘Down with Jim-Crowism’, ‘Scottsboro boys will not die!’. ‘Received Examiner reference library: May 5, 1933’ — stamped on verso.’Washington, D.C.; USACommunism — US — 1931-1933. (Photo by Los Angeles Examiner/USC Libraries/Corbis via Getty Images) 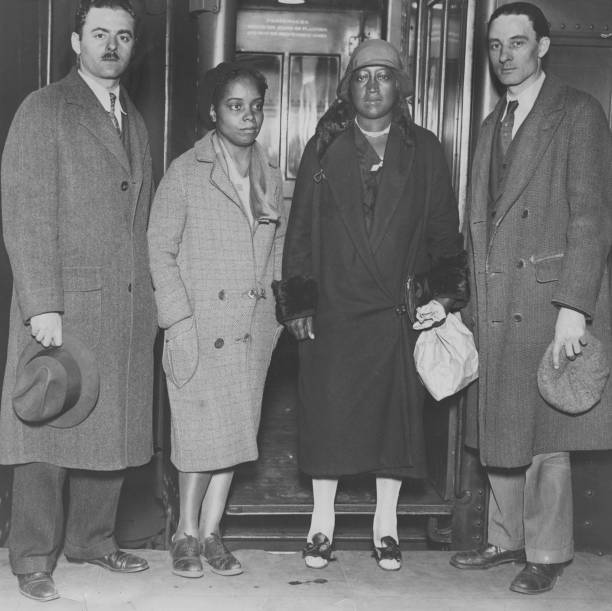 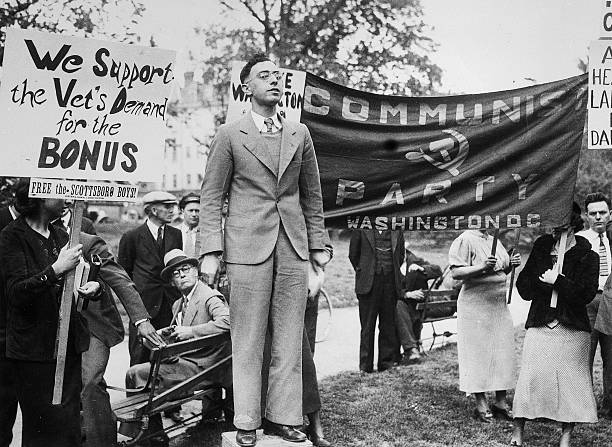 (Original Caption) 5/1/1935-Washington, DC: A man speaks before banners at a Communists’ meeting outside in Washington, DC. Signs behind him read, “Communist Party, Washington, DC,” “We Support the Vet’s Demand for the Bonus,” and “Free the Scottsboro Boys.”