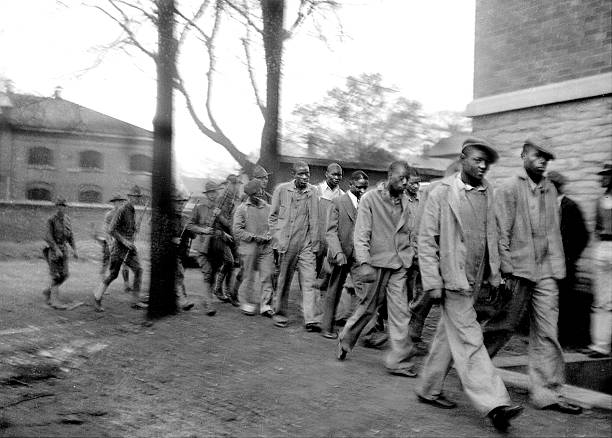 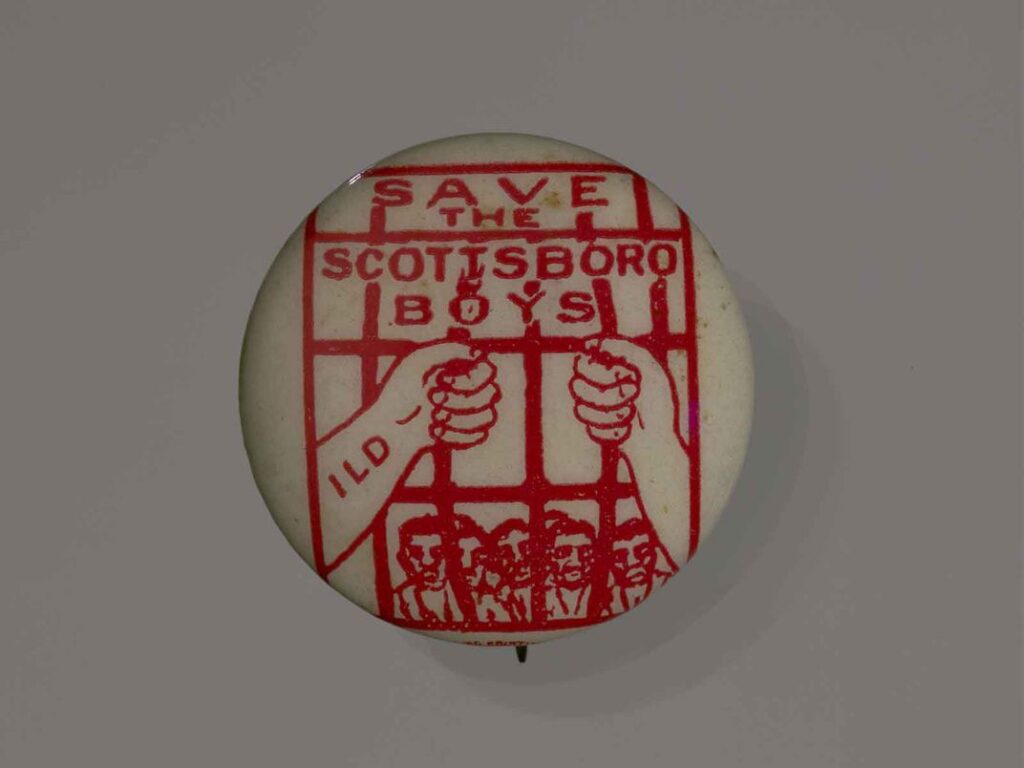 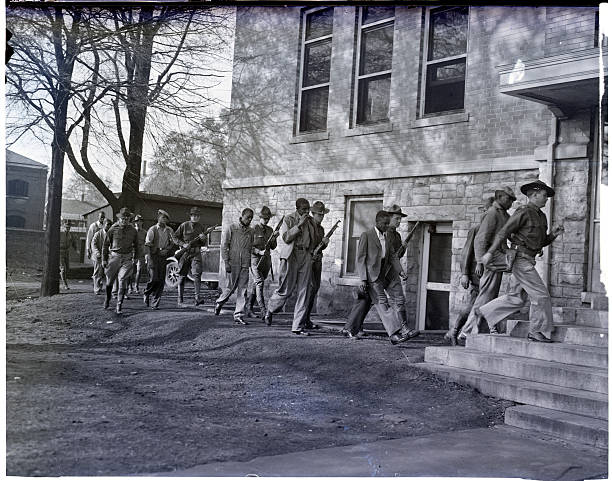 (Original Caption) 4/5/33-Decatur, Alabama: Scottsboro Case. The National Guard with defendants on way to a conference with defense attorney Liebowitz. 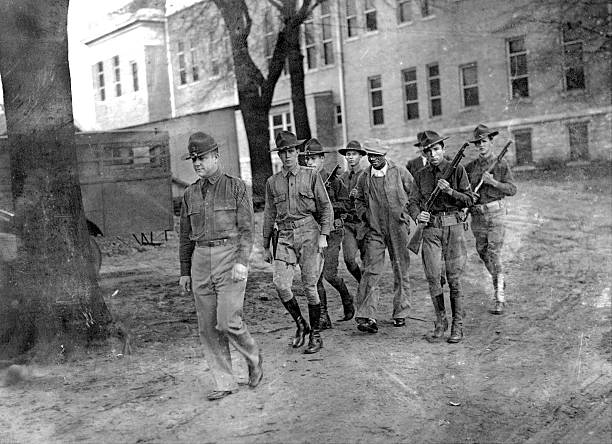 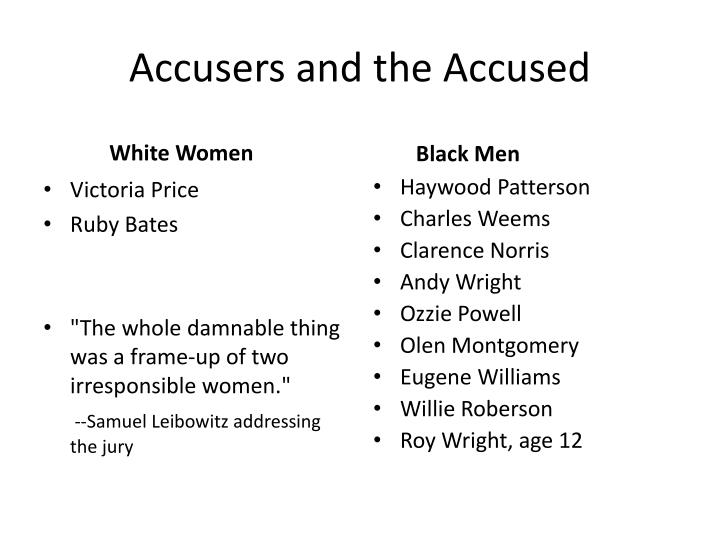 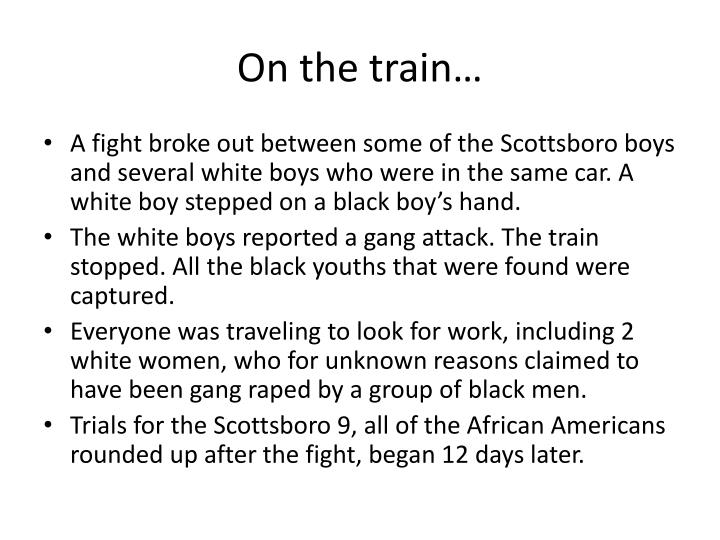 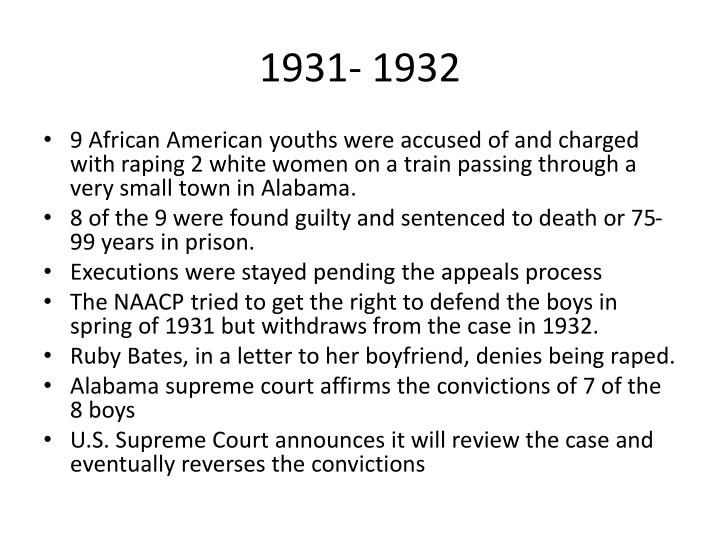 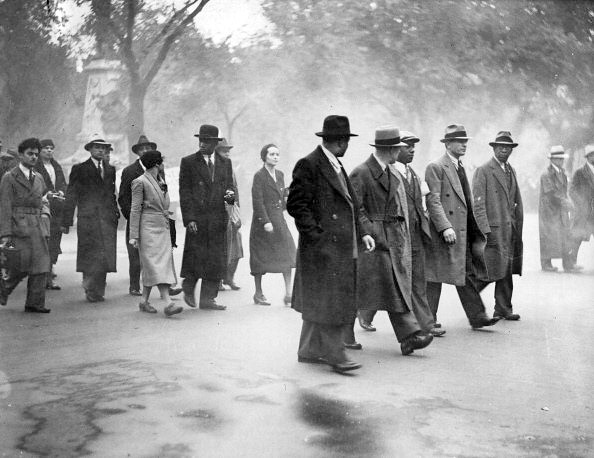 Black leaders at ‘Scottsboro Boys’ march in DC: 1933
Black leaders head up the “Scottsboro Boys” protest march of 4,000 in Washington, D.C. May 8, 1933, calling for the release of eight black teens sentenced to death for allegedly raping two white women in Alabama.
First row from left to right, James W Ford, former vice-Presidential candidate for the presidency on the Communist Party ticket, Carl Ackerson, white, Harry Haywood, Frank B Sector, and William L Patterson, secretary of the International Labor Defense;
The second row left to right, Louise Thompson, secretary of the National Scottsboro Action Committee, Samuel Patterson, chairman of this committee, and a Mrs. Martin, the woman who accompanied Ruby Bates [one of the women alleged to have been raped who recanted her testimony] to Washington from New York;
Third row, Charles Young, Baltimore, William N Jones, and George B Murphy Jr;
The smoke is from motorcycles of patrolmen to which the march leaders protested.
Signs called for freedom for Tom Mooney, Angelo Herndon, and Euel Lee in addition to the “Scottsboro Boys.”
The long march route: Assemble at Florida Avenue and New York Avenue, west on New York Avenue to N Street, west on N Street to Thirteenth Street, south on Thirteenth Street to New York Avenue, west on New York Avenue to Pennsylvania Avenue, west on Pennsylvania Avenue to West Executive Avenue, south to roadway south of the White House, east around the roadway to Pennsylvania Avenue via E Street, east on Pennsylvania Avenue to Constitution Avenue, east on Constitution Avenue to Second Street NE, south on Second Street to C Street SE, west on C Street to third Street SW, north on Third Street to Seaton Place: Rally then disband. 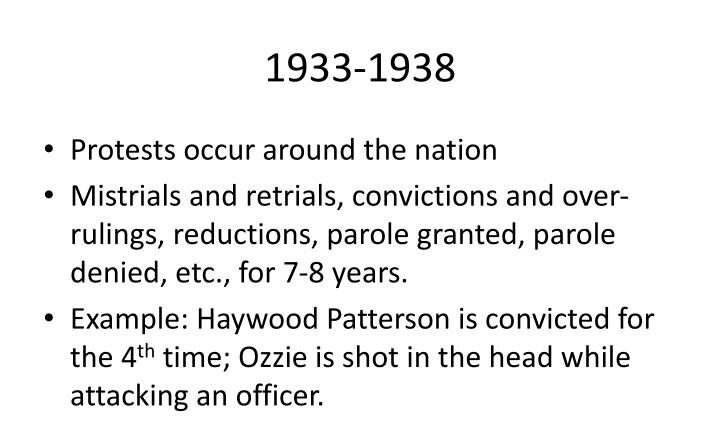 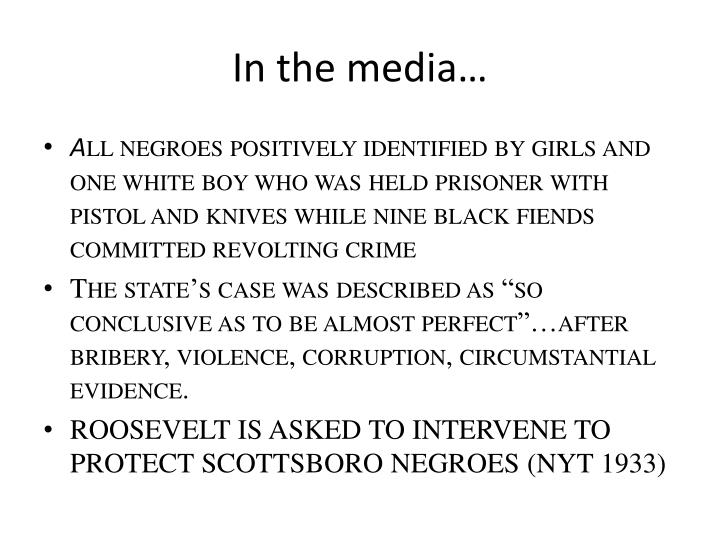 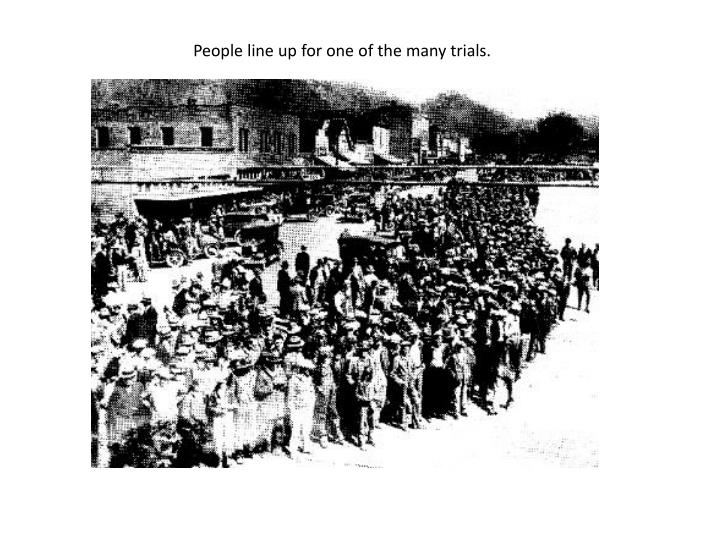 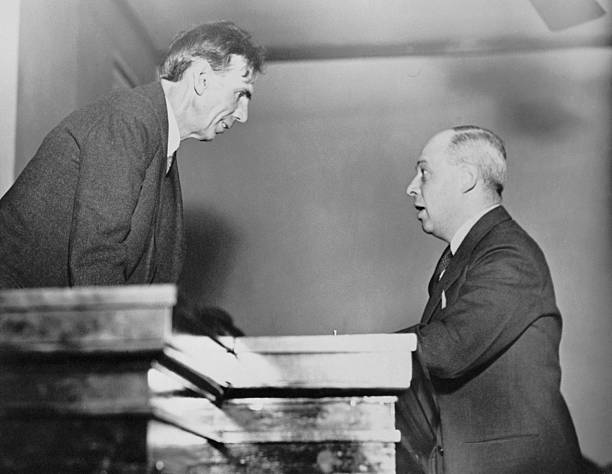 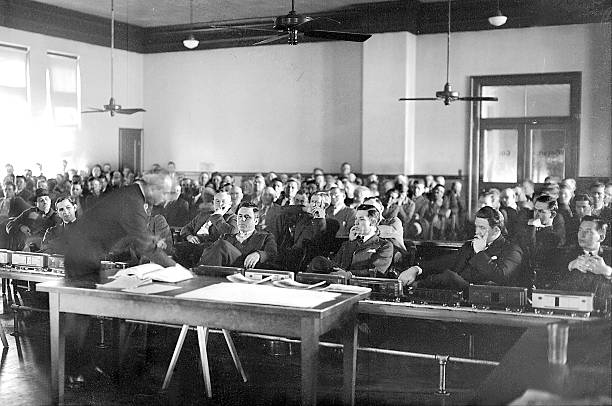 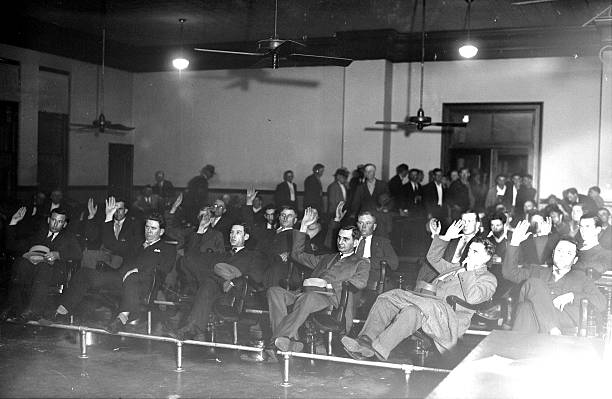 UNITED STATES – APRIL 02: Scottsboro Case – Feet on a brass railing, cuspidors handy, the twelve jurors in the Scottsboro case raise their right hands to be sworn in. They will begin hearing evidence today. Meanwhile, jurors have been segregated from the rest of the community. (Photo by NY Daily News Archive via Getty Images) 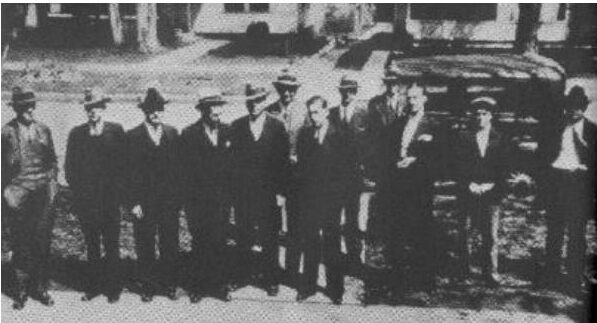 The ALL White / ALL male jury for one of the trials. 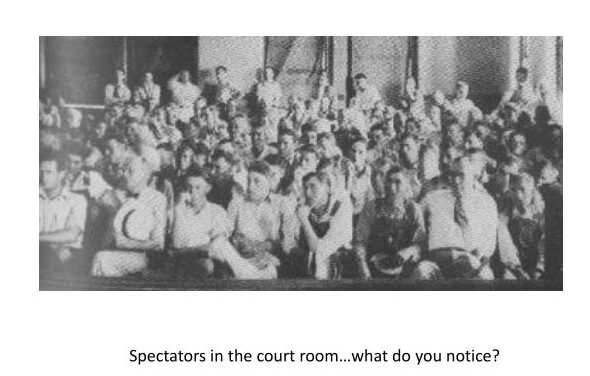 All White Spectators in the courtroom. 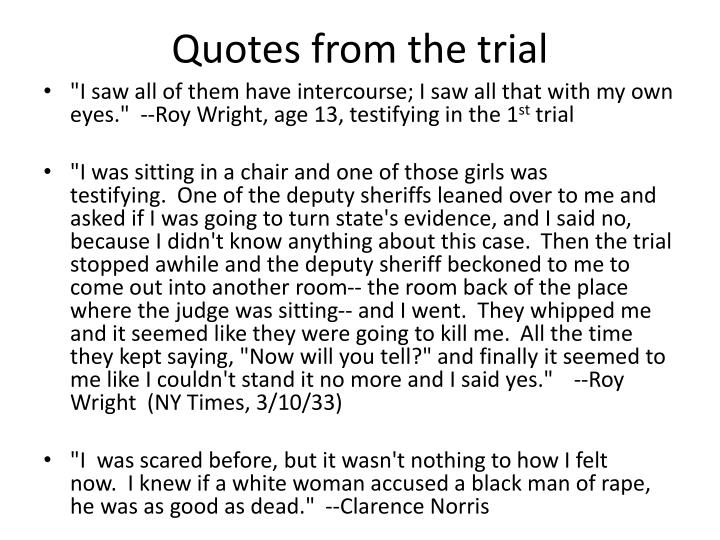 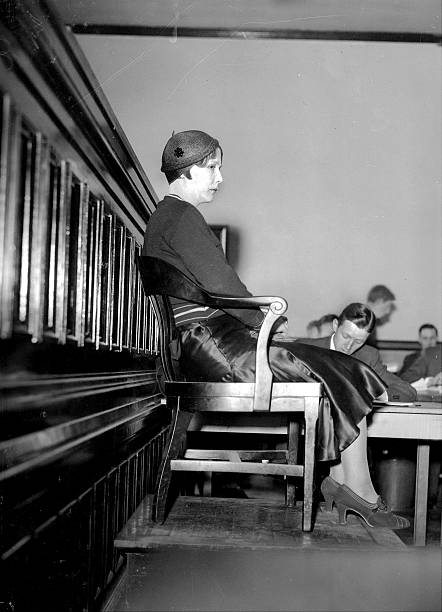 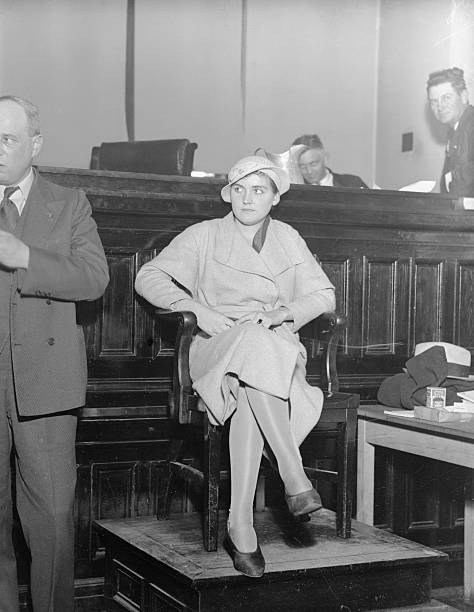 (Original Caption) Missing for weeks, Ruby Bates, one of the two white girls who testified they were attacked during the first trial of the Scottsboro Negroes, is seen here on the stand in court in Decatur, Alabama, as she suddenly and dramatically appeared to say that she was not assaulted and that to the best of her knowledge, Victoria Price was not attacked either. The jury is now out, following the trial of Heywood Patterson, the first of the seven Negroes to be tried.

The Accusers… • Victoria Price: • lower-class White woman, age 21 • An active prostitute who liked to drink; daughter of a widow who lived in a racially mixed section of town, worked at the mill, seen having intercourse in public places • Good on the stand, hostile, but made graphic allusion to the events that she claimed occurred.
Ruby Bates • Lower class girl, familial problems, “played, lived and slept with Blacks” • Described as a very active prostitute • Poor witness on the stand • Retracted her initial testimony and claimed that Victoria encouraged her lie so as to not get in trouble for violating the Mann Act, crossing state lines for immoral reasons, like sex. • Eventually campaigned for the released of the SB
Accusers and the Accused White Women Black Men Haywood Patterson Charles Weems Clarence Norris Andy Wright Ozzie Powell Olen Montgomery Eugene Williams Willie Roberson Roy Wright, age 12 • Victoria Price • Ruby Bates • “The whole damnable thing was a frame-up of two irresponsible women.” –Samuel Leibowitz addressing the jury

On the train… • A fight broke out between some of the Scottsboro boys and several White boys who were in the same car. A White boy stepped on a Black boy’s hand. • The White boys reported a gang attack. The train stopped. All the Black youths that were found were captured. • Everyone was traveling to look for work, including 2 White women, who for unknown reasons claimed to have been gang-raped by a group of Black men. • Trials for the Scottsboro 9, all of the African Americans rounded up after the fight, began 12 days later.

1931- 1932 • 9 African American youths were accused of and charged with raping 2 White women on a train passing through a very small town in Alabama. • 8 of the 9 were found guilty and sentenced to death or 75-99 years in prison. • Executions were stayed pending the appeals process • The NAACP tried to get the right to defend the boys in the spring of 1931 but withdraws from the case in 1932. • Ruby Bates, in a letter to her boyfriend, denies being raped. • Alabama supreme court affirms the convictions of 7 of the 8 boys • U.S. Supreme Court announces it will review the case and eventually reverses the convictions

1933-1938 • Protests occur around the nation • Mistrials and retrials, convictions and over-rulings, reductions, parole granted, parole denied, etc., for 7-8 years. • Example: Haywood Patterson is convicted for the 4th time; Ozzie is shot in the head while attacking an officer.
In the media… • All Negroes positively identified by girls and one White boy who was held prisoner with pistol and knives while nine Black fiends committed revolting crime • The state’s case was described as “so conclusive as to be almost perfect”…after bribery, violence, corruption, circumstantial evidence. •

ROOSEVELT IS ASKED TO INTERVENE TO PROTECT SCOTTSBORO NEGROES (NYT 1933)

Quotes from the trial

• “I saw all of them have intercourse; I saw all that with my own eyes.” –Roy Wright, age 13, testifying in the 1st trial

• “I was sitting in a chair and one of those girls was testifying. One of the deputy sheriffs leaned over to me and asked if I was going to turn in the state’s evidence, and I said no because I didn’t know anything about this case. Then the trial stopped awhile and the deputy sheriff beckoned to me to come out into another room– the room back of the place where the judge was sitting– and I went. They whipped me and it seemed like they were going to kill me. All the time they kept saying, “Now will you tell?” and finally it seemed to me like I couldn’t stand it no more and I said yes.” –Roy Wright (NY Times, 3/10/33)

• “I was scared before, but it wasn’t nothing to how I felt now. I knew if a White woman accused a Black man of rape, he was as good as dead.” –Clarence Norris 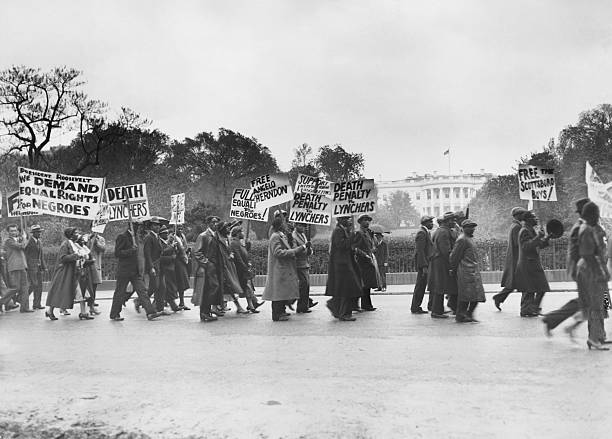 A long line of marchers paraded through the streets of Washington, May 8th, to the White House, shown in the background, to present a petition to President Roosevelt asking for intervention to free the men convicted in the Scottsboro, Alabama attack case.