Thurgood Marshall was instrumental in ending legal segregation and became the first African-American justice of the Supreme Court. One of the most significant Supreme Court justices of the past century, Thurgood Marshall was born on July 2, 1908, in Baltimore, Maryland. His great grandfather was a slave, as was his grandfather. His original last name was Thoroughgood, but he shortened it in second grade because he did not like to spell it. His father, William Marshall, was a railroad porter, and his mother Norma was a schoolteacher. They both instilled in him the importance of the constitution as well as the rule of law. Marshall attended Frederick Douglas High School in Baltimore and placed in the top tier of his class. Thurgood Marshall’s high school graduation photograph at age 17. His father was a railroad dining-car porter and steward at a country club; his mother, a homemaker, was a graduate of the historically Black Coppin Normal School.
(Courtesy of Supreme Court Historical Society)

He graduated in three years with a B average, putting him in the top third of his class. After his graduation, Marshall followed his brother, William Aubrey Marshall, to the historically Black college, Lincoln University in Chester County, Pennsylvania. His classmates included the presence of the poet, social activist, novelist, playwright, and columnist, Langston Hughes, the future President of Ghana, Kwame Nkrumah, and Cab Calloway, a famous bandleader, jazz singer, and musician.

At the beginning of his career at Lincoln, he did not take his studies seriously and got into quite a bit of trouble for hazing against fellow students. He also opposed the integration of African-American Professors into the school. He was the star of the debate team, which comes as no surprise due to his confidence, demeanor, and articulation of speech shown throughout his career as a lawyer. He was a member of the Alpha Phi Alpha fraternity to appear on Greek Row, which was the first Black fraternity. In 1929, during the month of September, Marshall married his first wife, Vivien Burey. This encouraged him to start taking his studies seriously, resulting in Marshall graduating Cum Laude, with a Bachelor of Arts in Humanities, with a major in American literature and philosophy. He had planned on attending the University of Maryland in 1930, but could not apply due to the segregation laws of the time placed by the school. Instead, he attended Howard University School of Law, where he met Charles Hamilton Houston, who was the Dean and future litigation director of the NAACP (National Association of the Advancement of Colored People). Houston played a large role in the disbandment of the Jim Crow Laws, and heavily influenced Marshall’s views on discrimination and segregation of the time. 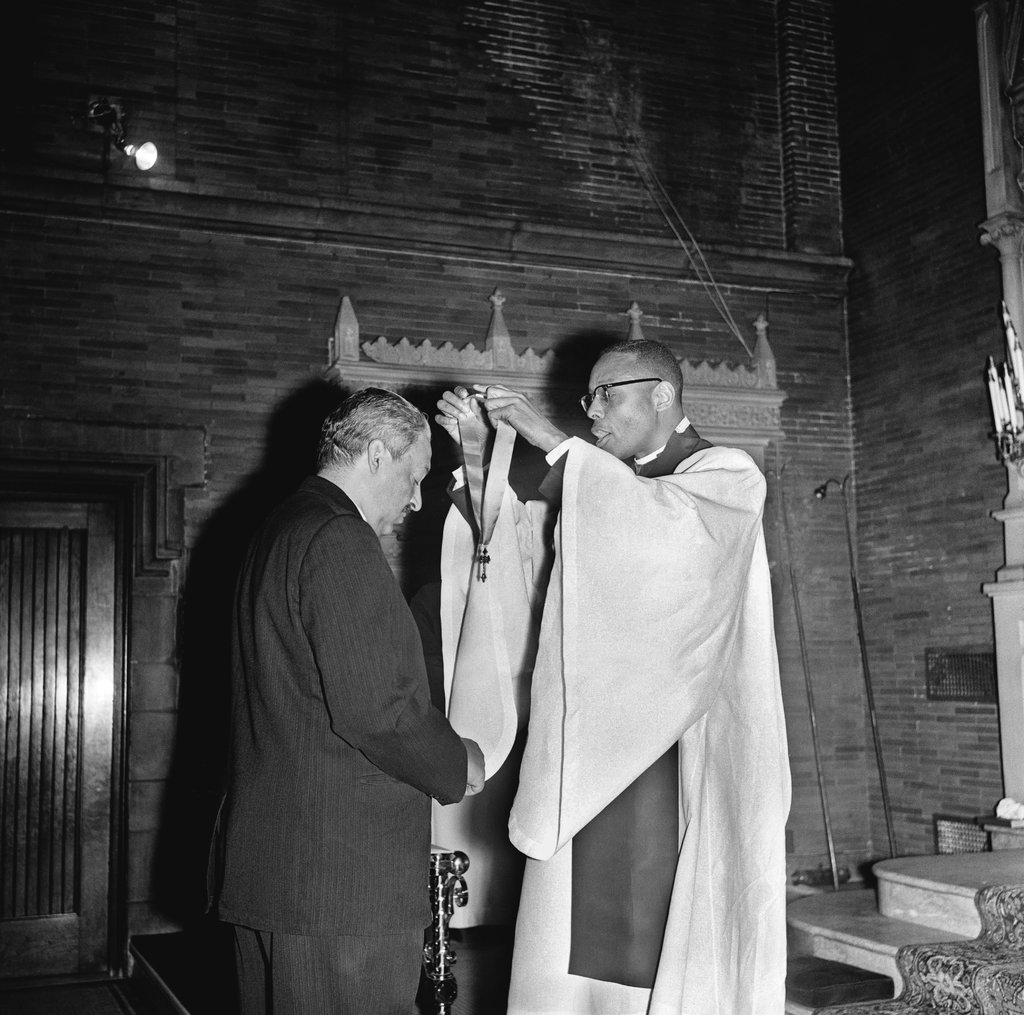 Thurgood Marshall was a lawyer of heroic imagination, who led the team that brought school desegregation to the Supreme Court, winning an end to separate but equal. In 1967, he became the country’s first Black Supreme Court justice.

But five years before that, on the Sunday after Thanksgiving in 1962, he made his way to St. Philip’s Protestant Episcopal Church in Harlem, where he was a vestryman, and bowed his head to receive the St. Philip’s Rector’s Award from the Rev. Dr. M. Moran Weston.

To outsiders perhaps, it was a minor accolade for Mr. Marshall, then a federal appeals court judge. It went unmentioned in Justice Marshall’s lengthy Times obituary. But the quiet humility he displays here in a photograph (never published until now) reveals just how much his faith, and church, provided him with spiritual strength.

Our article the next day only hinted at that. We ran a photograph of the judge behind the pulpit and wrote that he had urged his neighbors to “make Harlem the kind of place that people will want to come to.” We went on to quote him telling them: “We can complain, we should complain, and we shall continue to complain. But we must feel the responsibility first ourselves.”

It was a strong message. By a strong man. Showing the judge in eyes-closed, pious prayer probably didn’t fit with the coverage. Now, though, the photograph conjures up another message, delivered by President Obama last year after the church shootings in Charleston, S.C., when he described the deeper meaning of the Black church in American life. Over centuries, Black churches have been “our beating heart,” he said. “The place where our dignity as a people is inviolate.”