“Meanwhile, in the spectacular new National Museum of African-American History and Culture in Washington, DC, Till’s real restored casket, white and lined with silk, lies in state in a room that is more shrine than a museum display. Photographs cover the walls; gospel legend Mahalia Jackson sings over the loudspeakers. Visitors file out in tears, sometimes too overwhelmed to speak. “Your heart just drops,” one woman said. “So much sacrifice, so much blood, and it’s not over yet.” 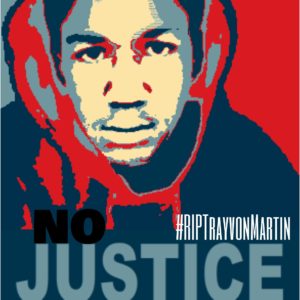 Trayvon Benjamin Martin (February 5, 1995 – February 26, 2012) was a 17-year-old African American teenager from Miami Gardens, Florida, who was fatally shot in Sanford, Florida by George Zimmerman. Martin had gone with his father on a visit to his father’s fiancée at her townhouse at The Retreat at Twin Lakes in Sanford. On the evening of February 26, Martin was walking back alone to the fiancée’s house after purchasing a bag of Skittles and an Arizona iced tea at a nearby convenience store. Zimmerman, a member of the community watch, saw Martin and reported him to the Sanford Police as suspicious. Moments later, an altercation between the two individuals took place and Zimmerman fatally shot Martin in the chest.

In a way, Till’s funeral never ended. His story echoes every time the killing of an African-American person by a white man goes unpunished – especially when the victim is young, as Trayvon Martin was when he was shot by a neighborhood watch volunteer in 2012 at the age of 17, or when the body is left in public view like that of a lynching victim, as 18-year-old Michael Brown’s was in Missouri in 2014. The wound is raw and regularly reopened. As Till’s mother used to say, “You must continuously tell Emmett’s story until man’s consciousness has arisen. Only then will there be justice for Emmett Till.” 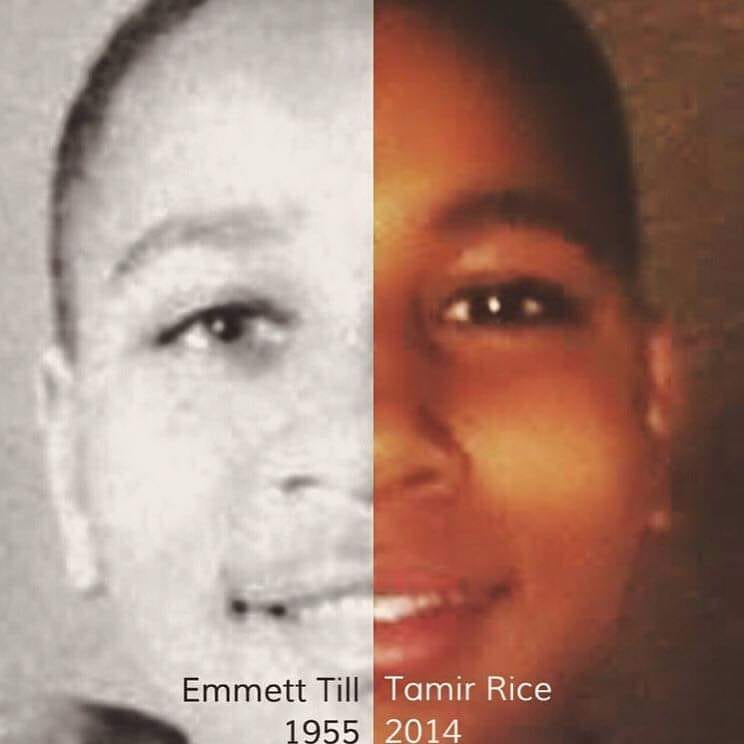 The shooting of Tamir Rice, a 12-year-old boy (June 25, 2002 – November 23, 2014), occurred on November 22, 2014, in Cleveland, Ohio. Two police officers, 26-year-old Timothy Loehmann and 46-year-old Frank Garmback, responded after receiving a police dispatch call of a black male that “keeps pulling a gun out of his pants and pointing it at people”.

A caller reported that a male was pointing “a pistol” at random people in the Cudell Recreation Center. At the beginning of the call and again in the middle he says of the pistol “it’s probably fake”. Toward the end of the two-minute call, the caller stated: “he is probably a juvenile”. However, this information was not relayed to Loehmann or Garmback on the initial dispatch. The officers reported that upon their arrival, they both continuously yelled “show me your hands” through the open patrol car window. Loehmann further claimed that instead of showing his hands, it appeared as if Rice was trying to draw: “I knew it was a gun and I knew it was coming out”. In response, the officer shot twice, hitting Rice once in the torso. He died on the following day.

American race relations: 10 key moments in the history of the black experience in the United States

The Confederate States of America is formed after slave-holding states in the south declare secession from the United States over disagreements about the expansion of slavery.

In a landmark case, the US supreme court upholds the constitutionality of racial segregation of public facilities as long as they are ‘equal in quality’

So-called ‘Jim Crow’ laws are enacted locally, enforcing racial segregation in public facilities in the South and reversing the gains made by
African-Americans after the war.

The US joins the Second World War following the bombing of Pearl Harbor. The nation’s military remains segregated throughout the conflict.

Executive Order 9981 is passed, proscribing racial discrimination in the US armed forces. It marks the first step in the eventual desegregation of the military.

State school segregation is ruled unconstitutional. This landmark victory for the civil rights movement is met with resistance, and further legislation is required for it to be fully enacted.

Emmett Till is murdered. Activist Rosa Parks hears a speech about his death; on 1 December, she refuses to give up her bus seat to a white passenger in Montgomery, Alabama, sparking a bus boycott.