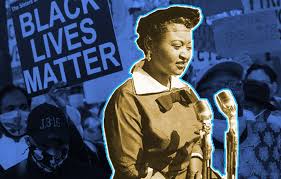 “Till’s story of injustice might have been lost to history if his mother, Mamie Till-Mobley, hadn’t insisted that the world take notice of her son. “ 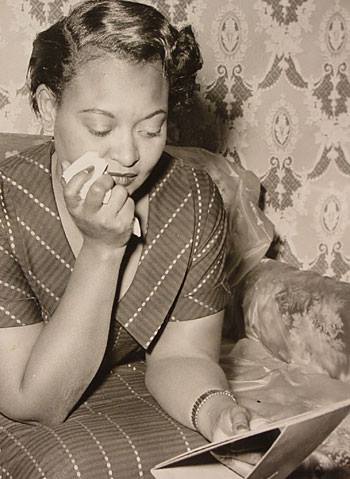 “The murder of Emmett Till in 1955 sparked a movement that led to America’s Second Reconstruction. The killing of George Floyd has pushed America toward a third. Floyd’s “cries of ‘I can’t breathe’ united this generation in a collective gasp for justice” 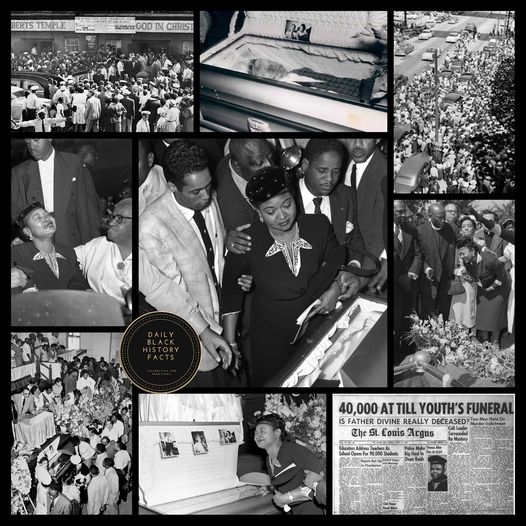 September 6, 1955: Emmett Till’s funeral is held at Roberts Temple Church of God in Christ in Chicago.
It was estimated that 30k-40k people attended the funeral.
Mamie Till declined an offer from the mortician to “touch up” her son’s body, and she made the decision to have an open-casket funeral with a glass-topped casket.
“I think everybody needed to know what had happened to Emmett Till,” Mamie stated.
Photographs of his mutilated corpse circulated around the country, notably appearing in Jet magazine and The Chicago Defender, both Black publications, generating intense public reaction.
According to The Nation and Newsweek, Chicago’s Black community was “awakened as it has not been over any similar act in recent history”.
Time later selected one of the Jet photographs showing Mamie Till over the mutilated body of her dead son, as one of the 100 “most influential images of all time”: “For almost a century, African Americans were lynched with regularity and impunity. Now, thanks to a mother’s determination to expose the barbarousness of the crime, the public could no longer pretend to ignore what they couldn’t see.” 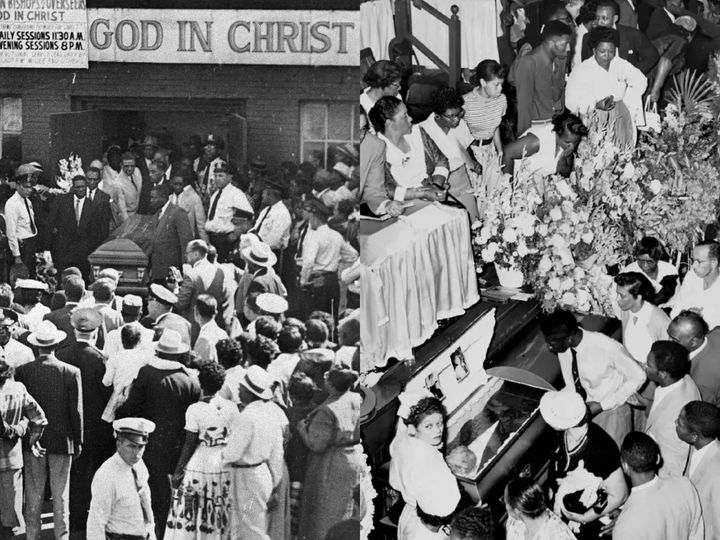 On August 24th, 1955, arriving in Mississippi, Emmett Till and his friends went to a White-owned grocery in the small hamlet of Money. Apparently, Till had been familiar with White friends, especially White girls — and the local kids, who could not believe what they heard, dared him to enter the store and flirt with Carolyn Bryant, the white woman who was the owner’s wife. “Some say he “wolf-whistled” at Bryant; others say he grabbed her hand and asked her for a date; still others claim he did nothing more than simply say “bye, baby” to her as he left the store. Whatever Till did, it was apparent to all involved that he had done something that made Carolyn Bryant angry or afraid.” Till and his friends ran away from the store as Mrs. Bryant went to get her gun. Unfortunately for Emmett Till, racial segregation was still a sensitive issue in the Southern States like Mississippi. 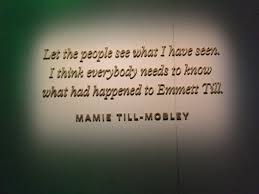 According to Mrs. Till’s request, the dead body was moved back to Chicago on September 2nd. 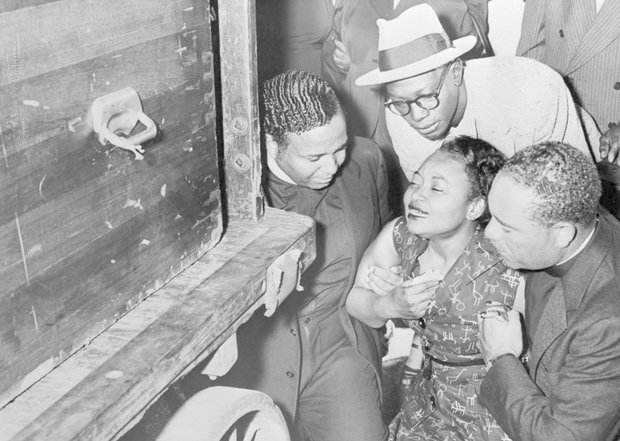 Original Caption: Sinking to her knees, Mrs. Mamie Bradley weeps as the body of her slain son, Emmett Louis Till, 14, arrives at Chicago Rail Station. The youth was found dead in a Mississippi creek with a bullet hole behind the ear. Being sought in connection with the slaying is Mrs. Roy Bryant, at whom the youth is supposed to have whistled a “wolf call”. Held also is storekeeper Roy Bryant and his half-brother, J.W. Milam. With the bereaved woman are left to right, Bishop Louis J. Ford; Gene Mabley; and Bishop Isiak Roberts, of St. Paul’s Church of Christ and God.

“For the first time seeing her son’s injured face, Ms. Mamie passed out.“

“Sixty years ago Jet magazine published photos of the disfigured and decomposed body of slain 14-year-old African American Emmett Till, rattling communities across the country and reigniting a widespread passion for the Civil Rights Movement. These photos were undeniably important to the dissemination of the story of Till’s murder, but it is the actions of young mother Mamie Till Mobley that pushed her son’s tragic death into the international spotlight.”

After recovering from the shock, she insisted to open the casket during the funeral for the world to see how brutal and unfair the tragedy was.

“All were shocked, some horrified and appalled. Many prayed, scores fainted and practically all, men, women, and children wept.” In their September 15 issue, Jet magazine published an unedited photo of Till’s face as he lay in his coffin. “Let the people see what they did to my boy!” 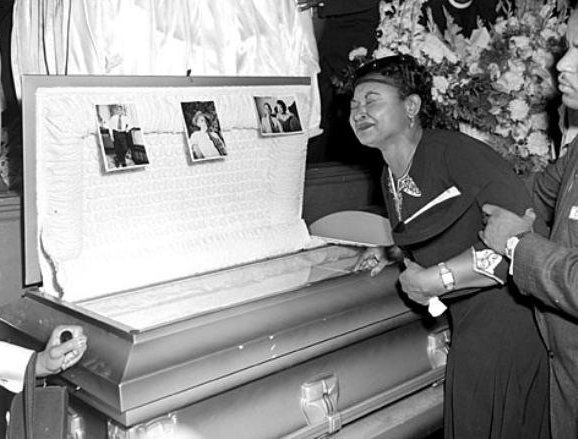 Emmett Till’s mother (Mamie Till) by his open casket

Mamie’s famous quote had a powerful impact not only on hundreds of thousands of people at the funeral but also on the civil rights movement soon after: “I wanted the world to see what they did to my baby.” It was a simple answer many years after Till’s death from his mother to Joyce Ladner’s question: “Why did you not have the undertaker do some cosmetic work on his face?”. Joyce is an African American civil rights activist, author, and sociologist who was also born in Mississippi in 1943. 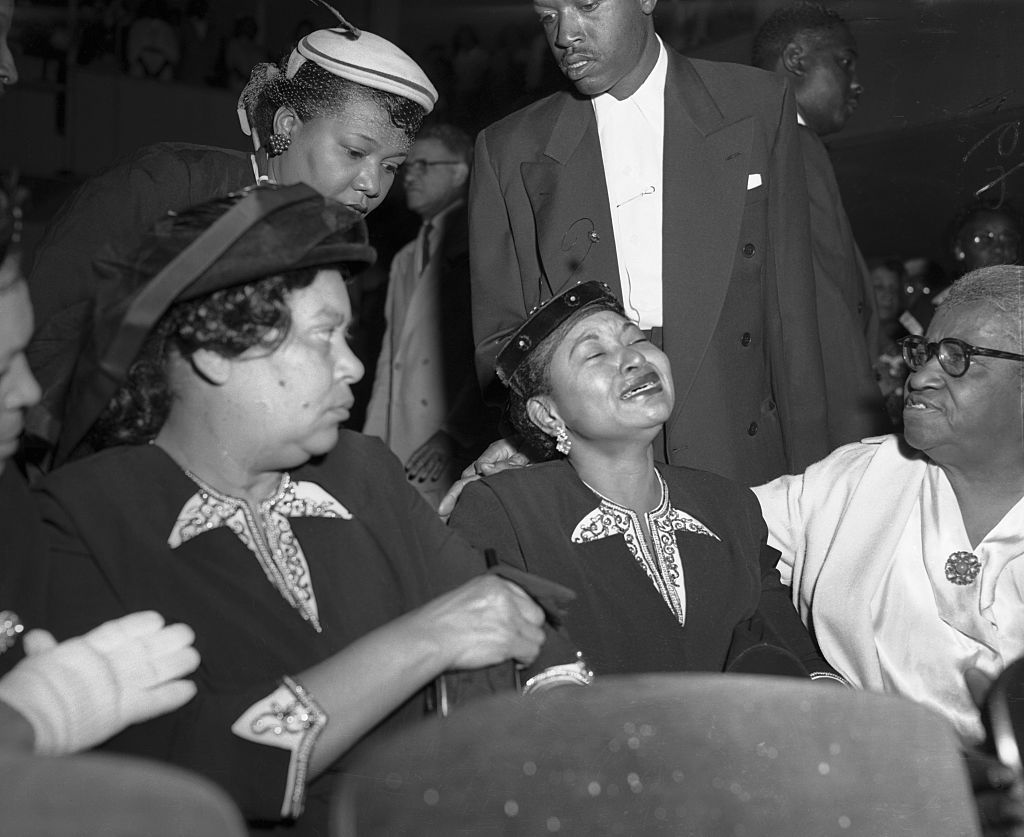 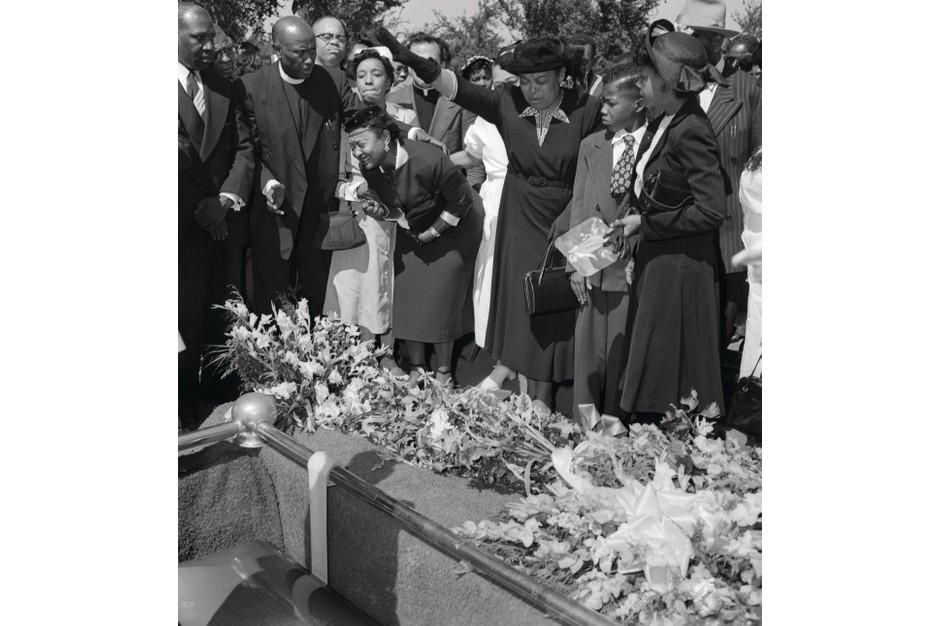 (Original Caption) Friends restrain grief-stricken Mrs. Mamie Bradley (left) as her son’s body is lowered into the grave after a four-day, open-casket funeral. The 15-year-old Negro youngster, Emmett Till, was shot and clubbed to death last week in Greenwood, Mississippi. He is believed to have been murdered for allegedly whistling at a white woman. Two men have confessed to kidnapping the youth by denying killing him.

“We cannot afford the luxury of self-pity. Our top priority now is to get on with the building process. My personal peace has come through helping boys and girls reach beyond the ordinary and strive for the extraordinary. We must teach our children to weather the hurricanes of life, pick up the pieces, and rebuild. We must impress upon our children that even when troubles rise to seven-point- one on life’s Richter scale, they must be anchored so deeply that, though they sway, they will not topple”
– Mamie Till Mobley

(Mother of Emmett Louis Till)

This quote is taken from her speech given at the dedication of the Civil Rights Memorial in Montgomery, Alabama on November 5, 1989. “Mamie Till devoted her life to activism, crossing the country to give speeches in the years after her son’s death. In the wake of Emmett Till’s murder, NAACP membership soared, and Mamie turned her loss into action.

Just months after the crime, Rosa Parks was arrested for refusing to sit in the back of a bus, and Martin Luther King Jr. called for the Montgomery bus boycott. In many ways, Mamie helped birth the civil rights movement by transforming her grief into a national outrage. Until her death in 2003, Mamie spent the rest of her life fighting for civil rights.” 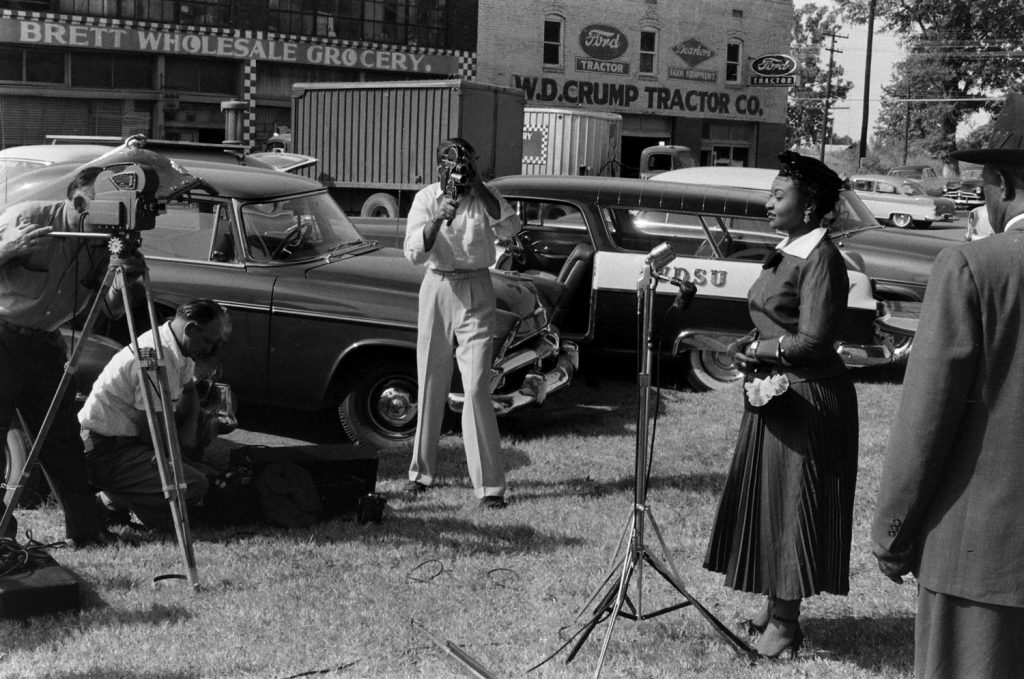 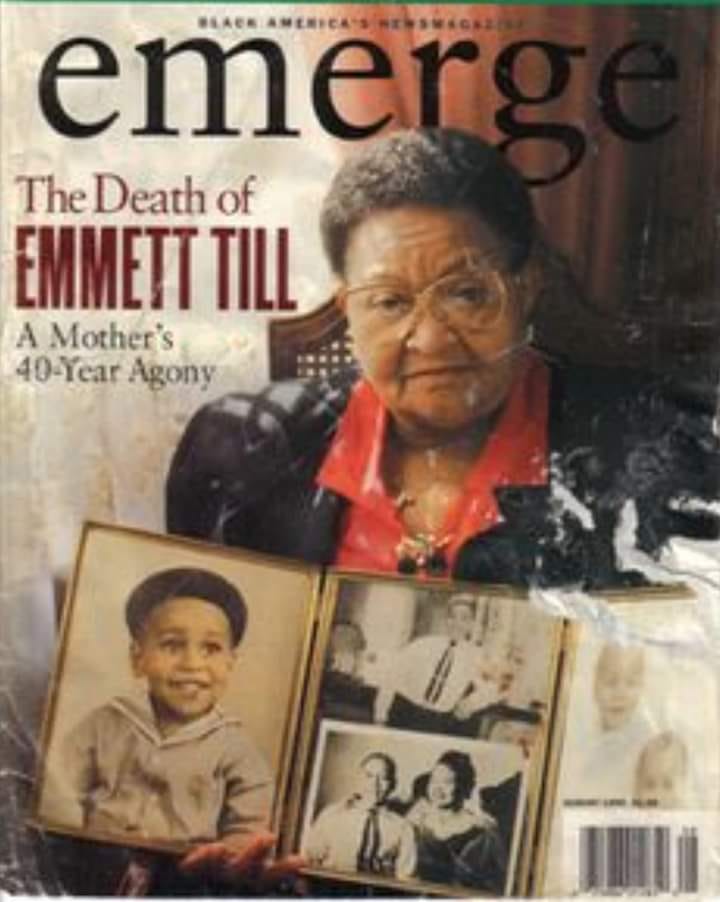 In 1973, she earned a master’s degree in administration and supervision at Loyola University.

She was a frequent lecturer throughout the country, recalling the struggle for civil rights and urging her listeners to be the best they could be.