The real turning point for him happened after the horrible murder of Emmett Till. 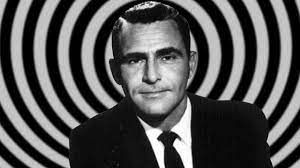 Serling’s Perspective on Social Activism
Serling moved to California to write for television shows. He was coming off the incredible success of “Patterns” and “Requiem for a Heavyweight”, and he was very much in demand. But he thought of writing as more than entertainment. Going back to his high school days, he thought that writers had a responsibility to speak up about social issues and causes. Whether it was the importance of fighting fascism in WW2, or civil rights and other important issues of the day, he felt that writers had to take a stand. “The writer’s role is to be a menacer of the public’s conscience,” he explained in interviews. “He must have a position, a point of view. He must see the arts as a vehicle of social criticism and he must focus on the issues of his time.” The real turning point for him happened after the horrible murder of Emmett Till.

Serling’s Reaction to Racial Injustice
Rod Serling felt strongly about issues of social justice, and like many American Jews of the time, was a strong advocate for civil rights for African Americans. Serling was outraged at the miscarriage of justice in the Emmett Till case, and immediately set out to write a script about the evils of prejudice and discrimination. However, networks at the time were very wary of producing anything controversial, for fear that it would drive away viewers.

Sponsors, too, were cowardly when it came to divisive issues because they didn’t want to drive any customers away from buying their products. The show Serling wrote for the program U.S. Steel Hour on ABC was called “Noon on Doomsday”, and was about a Jewish pawnbroker who was lynched in the deep South. However, even though Serling removed any overtly racial aspects to his script, after an interview Serling gave, all hell broke loose.

Forced to Change His Script
Serling knew that civil rights was a touchy issue, and wrote his script about a Jewish victim of a lynching in the South instead of a Black one. But even that was too close for some people. In an interview with the Daily Variety, Serling mentioned that his latest script was about the Emmett Till case, and the story was picked up by newspapers all over the country.

Thousands of letters began pouring into both ABC and U.S. Steel condemning the upcoming show. Even though most were from overtly white supremacist groups, the corporations quickly surrendered and changed the script to appease the racists. In an interview with Mike Wallace, Serling described it as a systematic dismantling of his story. They took out all references to the Till story, including “taking Coca-Cola bottles off the set because the sponsor claimed that this had Southern connotations”, as he told Wallace.

His Subsequent Script Suffered the Same Censorship
Serling was disappointed in how his script about Emmett Till had been eviscerated, and decided to try again. He penned a new script for CBS’s Playhouse 90 called “A Town Has Turned to Dust”, also about a lynching, but this time set in the southwestern US. CBS executives forced him to set the story 100 years in the past. Still, the story came a lot close to expressing how Serling felt about racial discrimination.

The end of the show featured a soliloquy delivered by a journalist writing home to his editor, and such speeches at the end of the episode soon became a trademark of Serling’s scripts, especially on the Twilight Zone. The soliloquy contained the following conclusion: “Two men died within five minutes and fifty feet of each other only because human beings have that perverse and strange way of not knowing how to live side by side.”