…and she gets away with all of it …again.

After hearing more than seven hours of testimony from investigators and witnesses, a Leflore County grand jury last week determined there was insufficient evidence to indict Carolyn Bryant Donham on charges of kidnapping and manslaughter, Leflore County District Attorney Dewayne Richardson said in a news release.

“The prosecutor tried his best, and we appreciate his efforts, but he alone cannot undo hundreds of years of anti-Black systems that guaranteed those who killed Emmett Till would go unpunished, to this day,” Parker said in a statement.

“The fact remains that the people who abducted, tortured, and murdered Emmett did so in plain sight, and our American justice system was and continues to be set up in such a way that they could not be brought to justice for their heinous crimes.”

Ollie Gordon, another of Till’s cousins, told The Associated Press news agency that some justice had been served in the Till case, despite the grand jury’s decision.

“Justice is not always locking somebody up and throwing the keys away,” Gordon said. “Ms Donham has not gone to jail. But in many ways, I don’t think she’s had a pleasant life. I think each day she wakes up, she has to face the atrocities that have come because of her actions.”

Timothy Tyson, the North Carolina historian who interviewed Donham for his 2017 book, “The Blood of Emmett Till,” said the newly rediscovered warrant did nothing to “appreciably change the concrete evidence against her”. But he said the renewed focus on the case should “compel Americans” to face the racial and economic disparities that still exist here.

“Ollie Gordon, another one of Till’s cousins, told The Associated Press that some justice had been served in the Till case, despite the grand jury’s decision.

“Justice is not always locking somebody up and throwing the keys away,” Gordon said. “Ms. Donham has not gone to jail. But in many ways, I don’t think she’s had a pleasant life. I think each day she wakes up, she has to face the atrocities that have come because of her actions.”

“The Till case will not go away because the racism and ruthless indifference that created it remain with us,” Tyson wrote in an email Tuesday. “We see generations of Black children struggle against these obstacles, and many die due to systemic racism that is every bit as lethal as a rope or a revolver.”

For Gordon, the renewed attention on the Till case has been a reminder of the social progress it helped lead.

“It helps the younger generations identify how far we’ve come with the many liberties and civil rights that we’ve gained since Emmett’s death,” Gordon said. “As his mother would say, his death was not in vain.”

“He walked into a store and it changed civil rights. That crumbling store has come to symbolize the struggle to address the nation’s racial violence.”

“…Bryant’s own admission to …the events that led to Till’s death didn’t happen as she had previously attested.”

“Outside private correspondence with her attorney, trial testimony, and her unpublished memoir, Bryant remained tight-lipped about her interaction with Till. In 2008, in her only interview since that fateful season of death, Bryant admitted… that a crucial piece of her testimony in court was fabricated. Till never “grabbed her around the waist and uttered obscenities,” as she had avowed on the witness stand. “You tell these stories for so long that they seem true,” she confesses early in the book, “but that part is not true.”

And so we are left with a sobering certainty, one that even Bryant herself is forced to concede to Tyson, more than 50 years later: “Nothing that boy did could ever justify what happened to him.”

THESE ARE THE SIGNS OF THE TIMES… 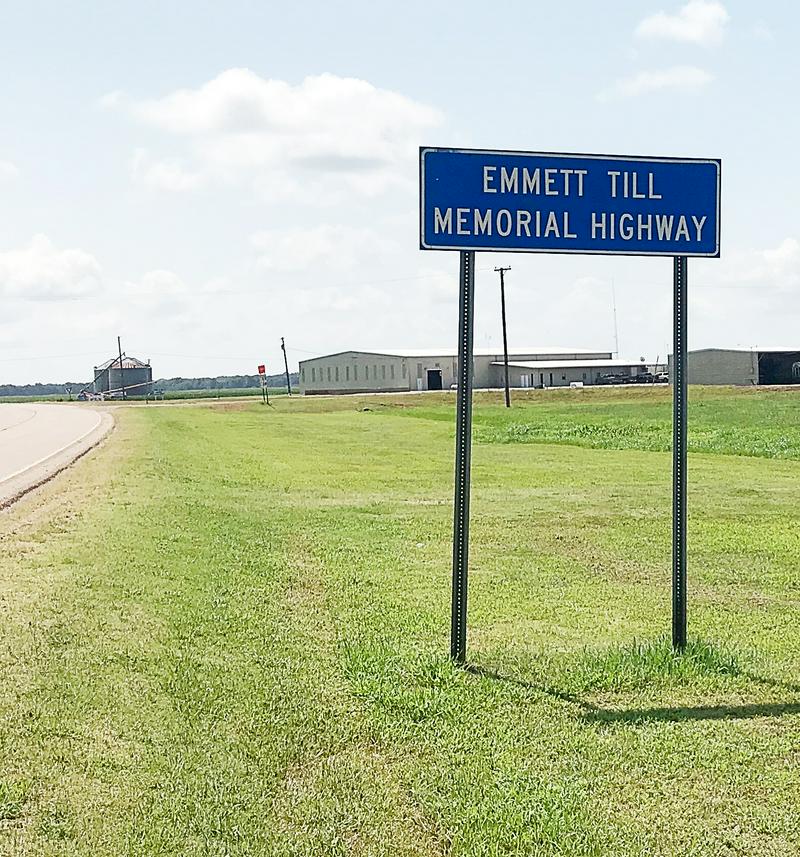 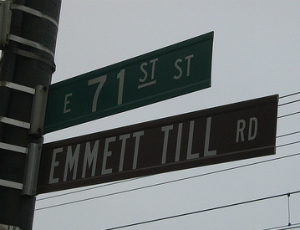 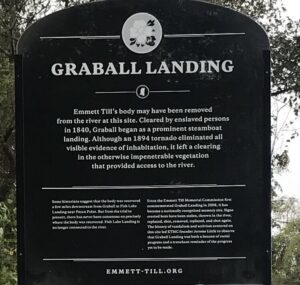 The new sign marks the spot in Tallahatchie County, Miss., where Emmett Till’s body was pulled from a river in 1955. This is the fourth sign erected on the site; others have been repeatedly vandalized. (Emmett Till Memorial Commission) Gift Article 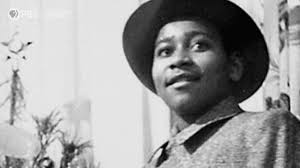 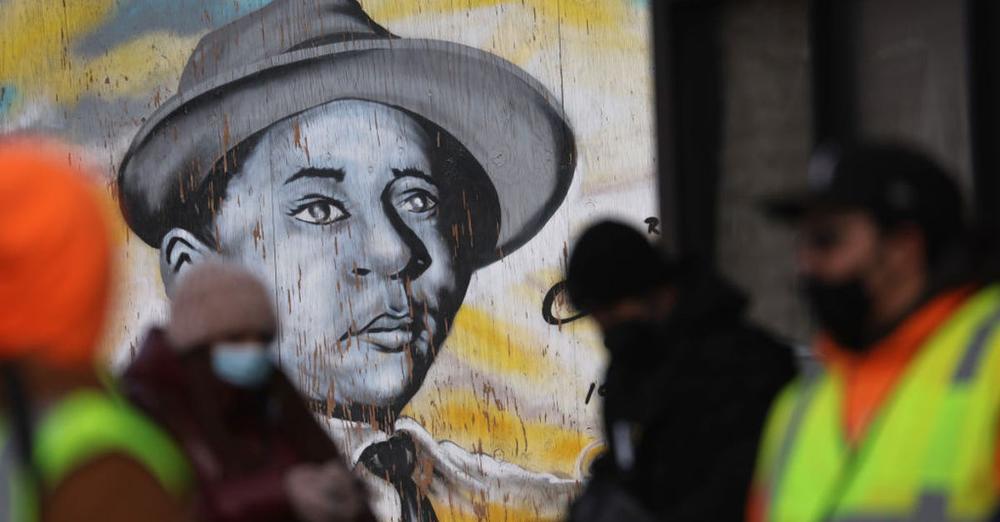 THE NINE-FOOT STATUE WILL BE TEN MILES AWAY FROM BRYANT’S GROCERY & MEAT MARKET, WHERE THE INFAMOUS WHISTLING INCIDENT OCCURRED.
By Murjani Rawls

“I am elated that it happened here,” Mississippi state Sen. David Jordan said. 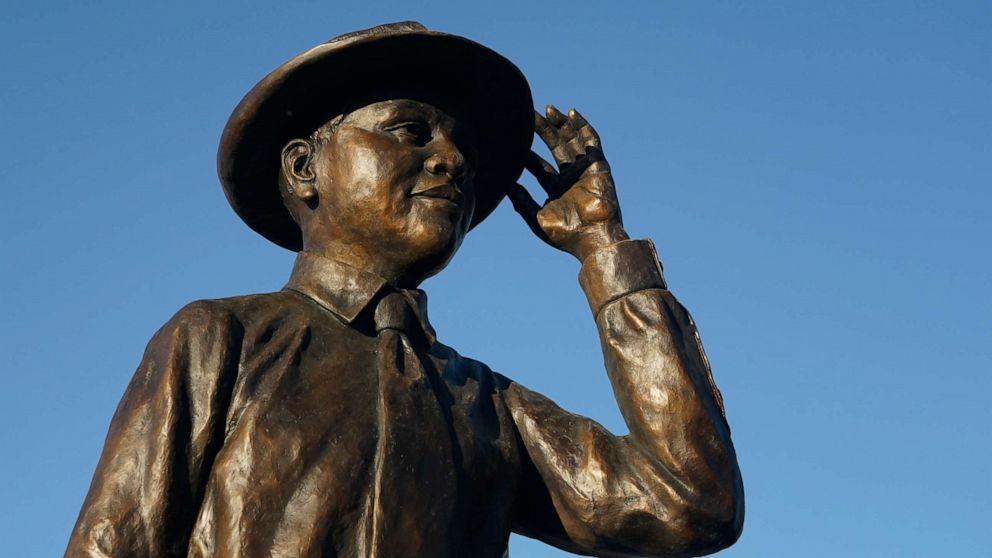 Emmett Till’s statue reflects the afternoon sun, during its unveiling, Friday, Oct. 21, 2022 in Greenwood, Miss. Till was a 14-year-old African American boy who was abducted, tortured, and lynched, Aug. 28, 1955, after being accused of offending a white woman, in her family’s grocery store in Money. (AP Photo/Rogelio V. Solis)
Rogelio V. Solis/AP 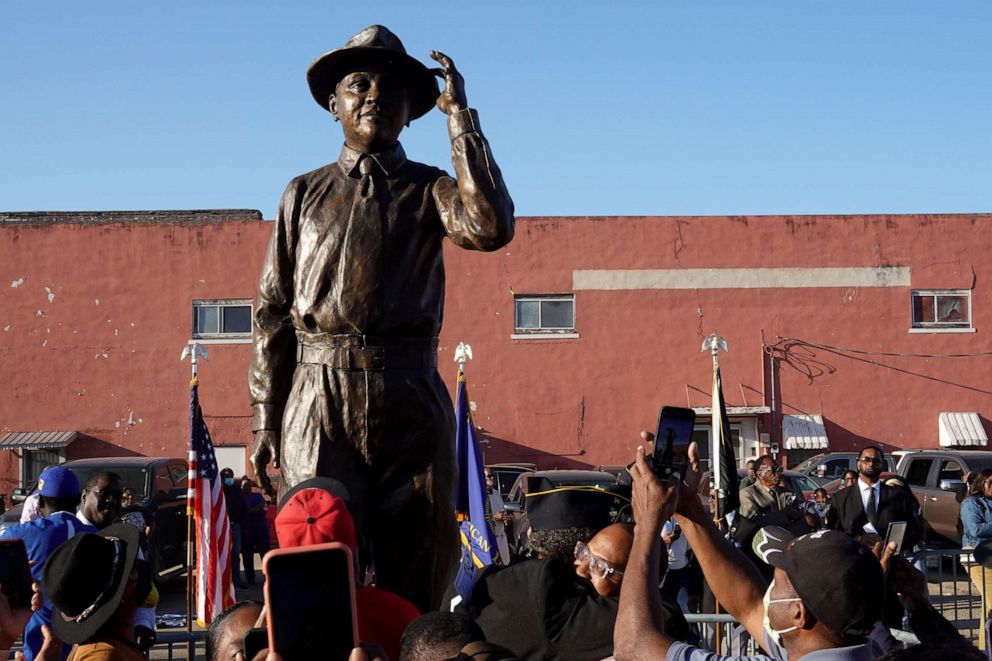 GREENWOOD, MISSISSIPPI – OCTOBER 21: A statue of Emmett Till is unveiled on October 21, 2022 in Greenwood, Mississippi. 14-year old Emmett Till, a Black teenager in town from Chicago visiting family in August 1955, was accused of flirting with Carolyn Bryant, a white woman working at the shop. Till was later kidnapped from his uncle’s home and murdered during a brutal, racist attack. His death is attributed to being the spark that ignited the civil rights movement. Today the nearby town of Greenwood will dedicate a statue of Till in the city’s downtown. (Photo by Scott Olson/Getty Images) 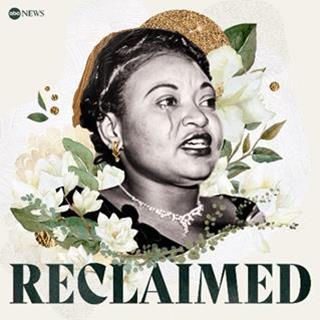 “Hosted by historian and ABC News contributor Leah Wright-Rigueur, the new series chronicles the life and legacy of Mamie Till-Mobley, whose fight for justice after her son’s brutal murder helped spark the civil rights movement. In 1955, Mamie Till-Mobley’s 14-year-old son, Emmett Till, was accused of offending a white woman in a Mississippi grocery store. Shortly after, a group of men kidnapped Emmett from a relative’s home and a local fisherman discovered his tortured body in the Tallahatchie River. Using Till-Mobley’s own words, as well as interviews from family members and other eyewitnesses, “Reclaimed” tells the story of a woman, mother and activist who made the courageous decision to let the world see the injustice and brutality her son faced.”