AFTER MORE THAN 120 YEARS OF FAILED ATTEMPTS IN CONGRESS

Until now, Congress failed more than 200 times to make lynching a federal hate crime, ending what Senate Majority Leader Chuck Schumer called a “bitter stain” on American legislative history. “To the family of Emmett Till…thank you for never giving up,” Biden said during the bill’s Rose Garden signing ceremony. “We remain in awe of your courage to find purpose through your pain.” The president declared,

He also called out past U.S. politicians for repeatedly failing to pass federal anti-lynching laws even as thousands of Black people were lynched, noting, “That’s a lotta folk, man—and a lotta silence for a long time.”

Biden celebrated the House passing the act back in February 2020 as “overdue…for more than a century,” while he was still on the campaign trail as a Democratic candidate for president. That year, the bill was blocked in the Senate by Kentucky Republican senator Rand Paul, who said the bill’s definition of lynching was too broad and would “cheapen the meaning” of the crime. The push was renewed under Biden’s presidency, put forward in the Senate—with slightly tweaked language—by Democratic senator Cory Booker and the chamber’s only Black Republican, South Carolina’s Tim Scott. This time, Paul approved.

The law is named in honor of 14-year-old Emmett Till, the victim of one of the most heinous lynching cases in U.S. history.

It’s believed Carolyn is still alive today, and if so, she would be 88 years old. Details of her life and her whereabouts have been kept private by her family, though it’s been said that Carolyn was in poor health prior to the publishing of Timothy Tyson’s book.

The memory of Emmett Till is still an uphill battle.

While a new ABC limited series, Women of the Movement, is shining a light on Emmett Till’s story, there is still much to be done. The grocery store where Emmett allegedly accosted Carolyn is in ruins, but its owners refuse to sell it. In August 2018, The Clarion-Ledger reported that the selling price of the dilapidated building is a whopping $4 million. That’s ridiculous and feels pretty calculated and cruel.

“A team, including acclaimed filmmaker and Emmett Till historian, Keith Beauchamp – searching a Mississippi courthouse basement for evidence about the lynching of Till, a murdered Chicago teenager, has found the unserved warrant charging a White woman, Carolyn Bryant, in his 1955 kidnapping.” 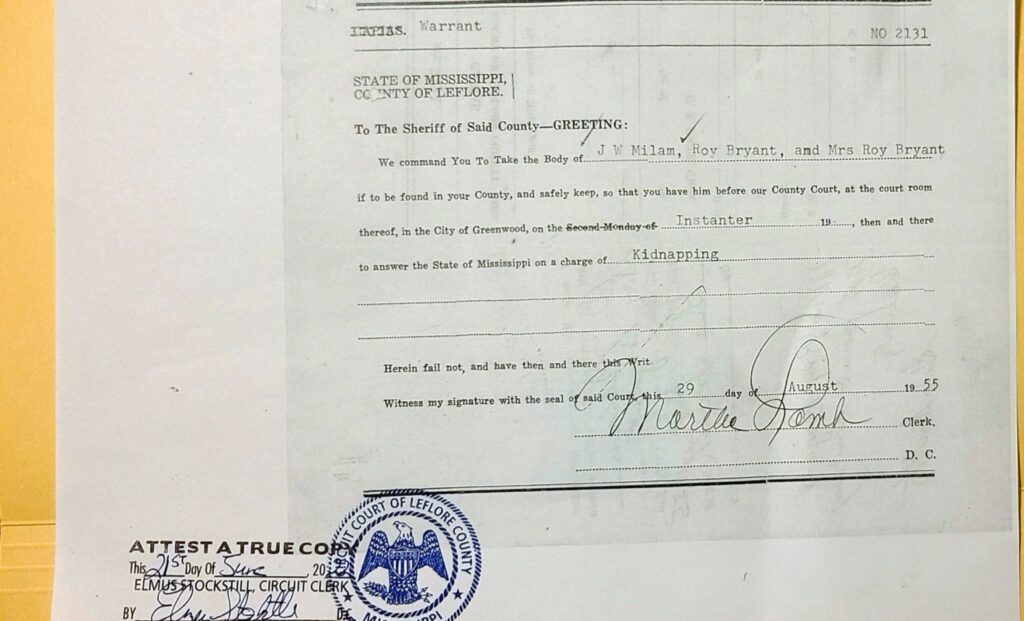 Till’s family are calling for her arrest 70 years later. Bryant is reported to be living in North Carolina.
https://abc7chicago.com/emmett-till-murder…/12005333/

“A team searching the basement of a Mississippi courthouse for evidence about the lynching of Black teenager Emmett Till has found the unserved warrant charging a White woman in his 1955 kidnapping, and Till’s relatives who initiated the search want authorities to finally arrest her nearly 70 years later.

A warrant for the arrest of Carolyn Bryant Donham — identified as “Mrs. Roy Bryant” on the document — was discovered last week inside a file folder that had been placed in a box, Leflore County Circuit Clerk Elmus Stockstill told The Associated Press on Wednesday. This undated photo shows Emmett Louis Till, a 14-year-old Black Chicago boy who was kidnapped, tortured, and murdered in 1955 after he allegedly whistled at a White woman in Mississippi.

Documents are kept inside boxes by decade, he said, but there was nothing else to indicate where the warrant, dated August 29, 1955, might have been.

The search was started by the Emmett Till Legacy Foundation and included two members of Till’s family: Cousin Deborah Watts, head of the Foundation; and her daughter, Teri Watts. They want authorities to use the warrant to arrest Donham, who at the time of the slaying was married to one of two White men tried and acquitted just weeks after Till was abducted from a relative’s home, killed, and dumped into a river.

“Serve it and charge her,” Teri Watts told the AP in an interview.

Donham set off the case in August 1955 by accusing the 14-year-old Till of making improper advances at a family store in Money, Mississippi. A cousin of Till who was there has said Till whistled at the woman, which flew in the face of Mississippi’s racist social codes of the era.

Evidence indicates a woman, possibly Donham identified Till with the men who later killed him. The arrest warrant against Donham was publicized at the time, but the Leflore County sheriff told reporters he did not want to “bother” the woman since she had two young children to care for.

Now in her 80s and most recently living in North Carolina, Donham has not commented publicly on calls for her prosecution. But Teri Watts said the Till family believes the warrant accusing Donham of kidnapping amounts to new evidence.”

Emmett Till supporters enter N.C. senior living center searching for his accuser and demanding her arrest

Dozens of Till’s supporters first went to an apartment building in North Raleigh in search of the woman who now goes by Carolyn Bryant Donham and who is thought to be in her 80s, according to WRAL. In the arrest warrant, she is identified as “Mrs. Roy Bryant.” The group then made its way to a senior living facility, where one protester said, “Time to face your demons. Come on out.”

The demonstration prompted local police to respond to the scene and the center was locked down briefly. It’s unclear whether Donham is a resident of the senior home.

“You cannot ignore this. That is the reason why the warrant needs to be served, and it will help create change,” Till’s cousin Priscilla Sterling told WRAL. “If this is what’s needed to do for us to change our mindset, our behaviors and attitudes in the society, then this will do it. This will do it. Execute the warrant.”

Said one protester: “I do understand that Ms. Bryant is in her mid-to-late-80s, but understandably, this is a crime she committed when she was 22. Sixty years later, it’s time for her to be held accountable.”

At the time, a local Mississippi sheriff declined to serve Donham with the arrest warrant, saying he did not want to “bother” her because she had two children, according to the New York Post.

Members of the Emmett Till Legacy Foundation discovered the warrant last month in the basement of a Mississippi courthouse. Dated Aug. 29, 1955 — one day after Till was murdered — the document had been placed inside a file folder in a box, and Leflore County Circuit Clerk Elmus Stockstill said it is authentic, WRAL reported last month.

The three did “willfully, unlawfully and feloniously and without lawful authority, forcibly seize and confine and kidnap Emmitt Lewis Tell,” according to an affidavit (in which Till’s names are misspelled) attached to the warrant, obtained by WRAL. The three refer to Bryant, Milam, and Donham, who was then Mrs. Roy Bryant.

An earlier investigation into Till’s murder case was closed last December by the U.S. Department of Justice without charges being brought, WRAL reported.

Still, the demonstrators are on a mission to track down Donham with the hope that she is finally held accountable nearly 70 years after Till’s murder. “Right now, we’re in negotiation mode … trying to put pressure on Mississippi to make sure they execute that warrant so she can be taken from Raleigh to Mississippi,” a protester told WRAL. A mural featuring a portrait of civil rights icon Emmett Till in Chicago.
Scott Olson/Getty Images

“The Department of Justice, as you know, closed the case once again on December 6 of this past year, citing that there was no new information, no new evidence and that they were not able to prove any culpability on the part of Carolyn Bryant Donham.”