The Pin-up Girl for the ‘Karen‘ movement 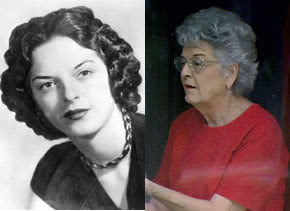 “Carolyn Bryant is perhaps frozen in memory as the 21-year-old local beauty working behind a counter in a country store where Emmett Till fatefully crossed her path in 1955. She turned 84 years old in July 2018 and has, for decades, been a devoted mother and grandmother and enjoys a close relationship with her family. Carolyn, for her part, has wanted only to live quietly, out of the spotlight.

She learned American Sign Language and became very proficient at it so that she could communicate with her daughter. On one occasion, her skills allowed her to come to the rescue of a deaf woman who had been in a car accident, comforting her until paramedics arrived. She also was quite talented at making jewelry, which she sold at arts and crafts shows until the early 2000s.

Like Mamie Till-Mobley, Carolyn experienced the pain of losing a child, or in her case, two. In September 1995, her firstborn, Roy Bryant Jr., passed away of cystic fibrosis. In April 2010, Frank, her youngest son, died of heart failure. Her faith in God sustained her through these two losses, and she believes her sons are now together. She says she places God first and her children second in her life.

Two months after Frank’s death, Carolyn put her home in Greenville up for sale and moved to Raleigh, North Carolina, to live with her surviving son. She brought along her dog, a 16-year-old Shih Tzu, but by July 2012, the dog had died, but her son surprised Carolyn with another of the same breed.

Lasting romantic love eluded Carolyn, however. After her divorce from Roy Bryant in 1975, she remarried at least twice. In 1984 she wed Greenville resident Griffin Chandler, an employee at U.S. Gypsum. The marriage ended three and a half years later with Chandler’s death. The widowed Carolyn soon married again, this time to former Leland police officer David Donham. In 1988, Carolyn began attending Mississippi Delta Junior College in Moorhead and took classes as a part-time student until 1990. The Donhams’ eventually divorced. With the help of her brother, Thomas Holloway, Carolyn moved to Brookhaven into a small home after her divorce, where she lived until Thomas died in 2000. After that, she returned to Greenville to be near Frank.

In June 2010, Carolyn joined Facebook, establishing a profile with a username that kept her actual identity hidden. Five months later, she both posed and answered the question as to what constitutes the real qualities in a man. Her answer was that they must be ethical and stand up for a good cause. If this seemed to hint of her first husband’s attempt to preserve the sanctity of her white womanhood, which propelled both her and him into the public eye, she was quick to add that a real man will respect others and refrain from bullying.

With the encouragement of her daughter-in-law, Marsha Bryant, Carolyn agreed to write her memoir. However, Frank Bryant’s death took a toll on her and the project stalled. When the FBI investigated the case from 2004–5, Carolyn became a focus. In February 2007, Joyce Chiles, district attorney for Sunflower County where the murder occurred, called a grand jury to hear evidence against Carolyn for possible manslaughter charges. In the end, the racially mixed jury refused to indict, citing a lack of evidence. “I feel like the district attorney used us as scapegoats,” said Black jury member Otis Johnson. “To me, it seems like they just wanted to put on a show and go through the process to make people happy.” 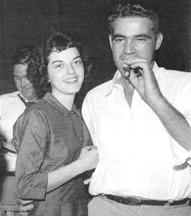 The talk down between Emmett Till and Carolyn Bryant went to her husband’s ears.

On August 28th, 1955, Roy Bryant and his brother, Milam, went to the house of Till’s uncle and took the boy away right in front of Wright’s eyes. 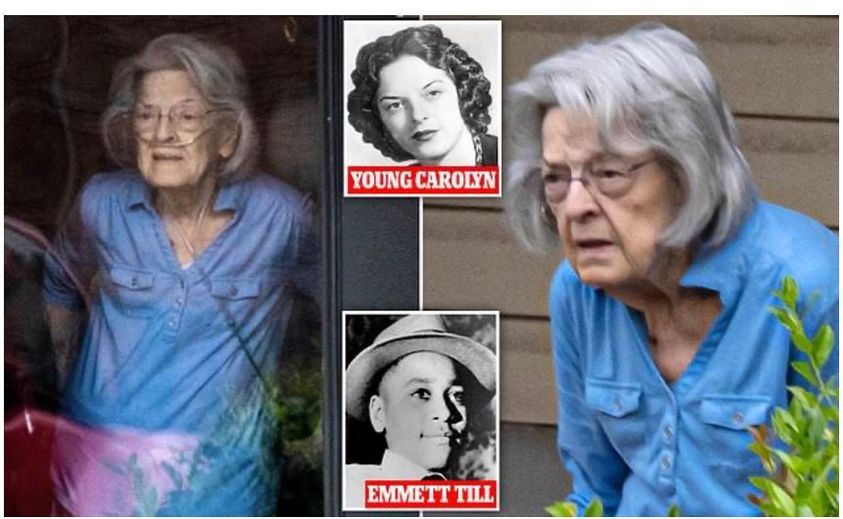 “Just weeks after an unserved arrest warrant was found for Emmett Till’s accuser, Carolyn Bryant Donham has been found in Kentucky.

According to the Daily Mail, Carolyn Bryant Donham is 88 years old and living in Kentucky. A Daily Mail reporter asked her son, Thomas Bryant, 71, if his mother would comment on Till. He reportedly shook his head no with his mother standing behind him. The outlet claims she is legally blind and receives hospice care in her home.”

Last month, an unserved warrant charging Carolyn Bryant for the 1955 kidnapping of Emmett Till was found in the basement of a Mississippi courthouse. Emmett Till’s family called for her arrest. Mississippi’s Attorney General Lynn Fitch said there is no plan to prosecute Bryant. According to the Associated Press, Michelle Williams, chief of staff for Fitch, asserted on July 15, “There’s no new evidence to open the case back up.”

Williams also noted that the Justice Department previously investigated without filing charges and closed the case in December.

“We made a promise to Mamie (Till) that we would persist and that’s why we’re here today.” Family members of Emmett Till met at the Mississippi State Capitol… to speak on their plans to seek justice for the kidnapping and lynching of Till over 66 years ago.

Deborah Watts, a cousin of Till and co-founder of the Emmett Till Legacy Foundation, revealed that they’ve assembled a petition containing 250K+ signatures that they later delivered to the Walter Sillers government building to request that a murder sentence be handed down to Carolyn Donham, whose accusations against Till in 1955 led to his death at the age of 14.

“She has failed at every turn to offer a redeeming word or action for the boy’s murder and her part in it. The words we’ve seen of this memoir don’t cut it.

The only sympathy I have about this case is for Emmett Till and his family. For Donham, I have only questions — and contempt.” 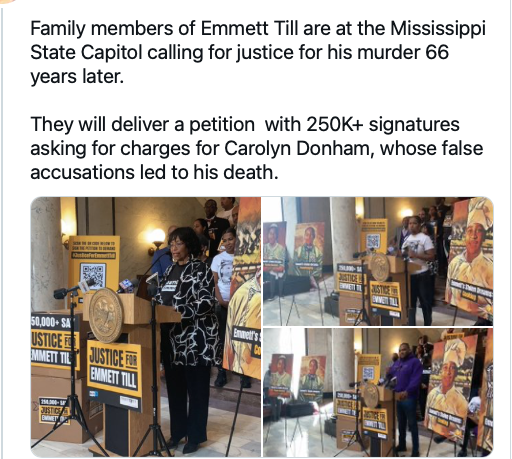 “We will bear witness to the hatred that has been embedded in our DNA since the slave ships arrived,” said Watts on Friday during a speech given at the Capitol first quoted by the Clarion Ledger. “We made a promise to Mamie (Till) that we would persist and that’s why we’re here today.”

During their assembly at the Mississippi State Capitol on Friday Till’s cousin, Deborah Watts said that Carolyn Donham, now 88, has never reached out to the Till family to apologize. 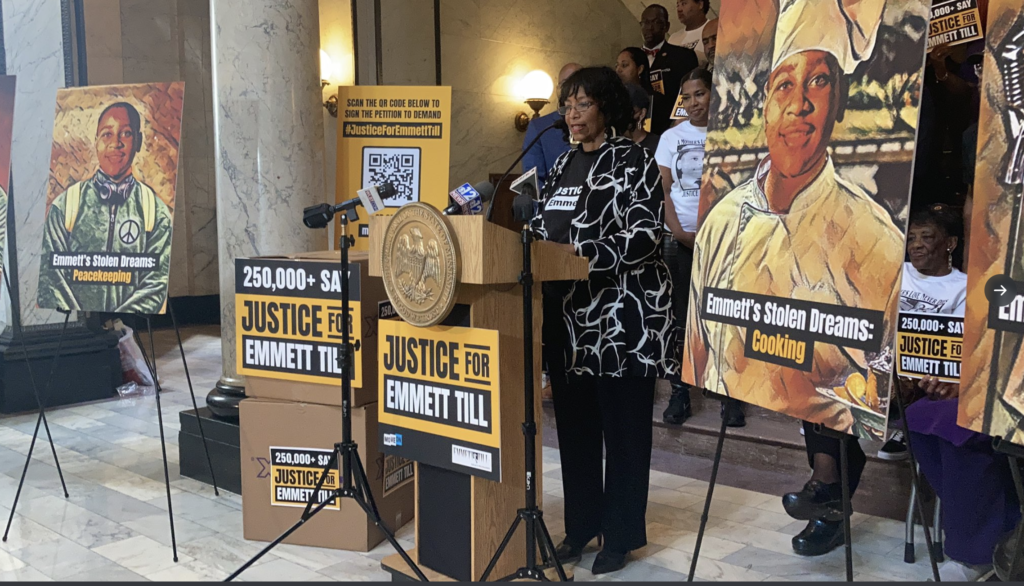 “We hold the State of Mississippi responsible for bringing justice forward,” Watts said to a member of Fitch’s office. “You have the opportunity. You just need the will and the courage to make that happen.” 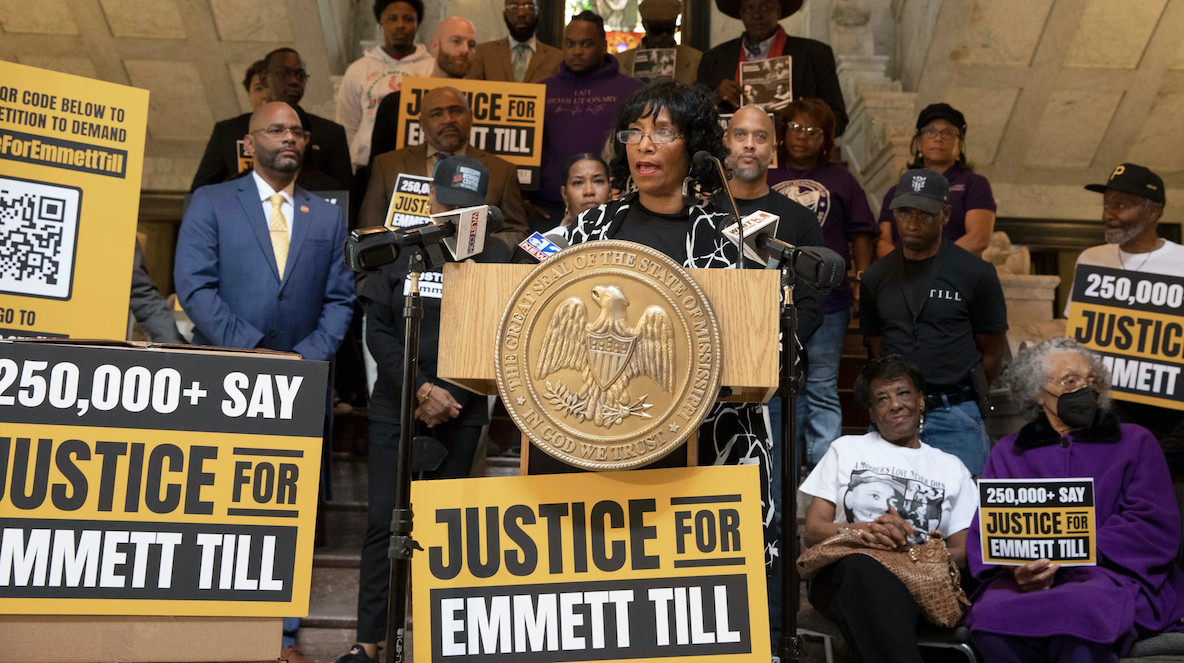