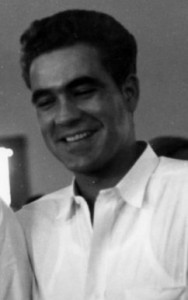 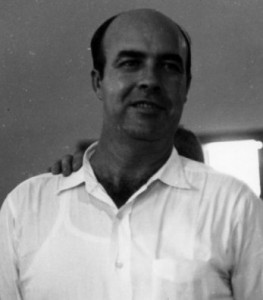 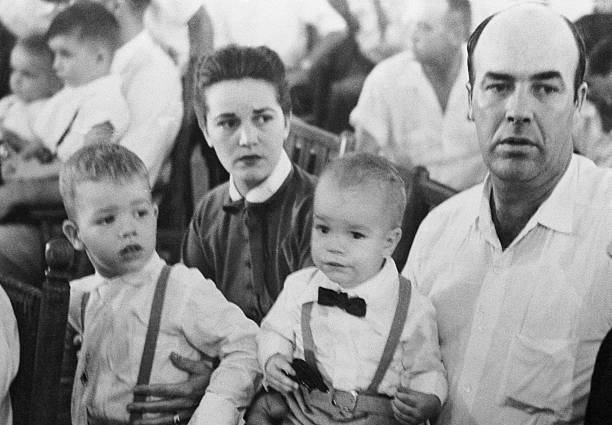 John W. Milam, who, with his half-brother Roy Bryant, is on trial for the kidnapping and lynching of 14-year-old Emmett Till of Chicago, appears in court with his wife, Juanita, 27, and sons Bill, 4, and Harvey 2. Till’s body was found in the Tallahatchie River after he allegedly whistled at Bryant’s wife. Both men were acquitted in the slaying, but Milam later admitted that they had done it. 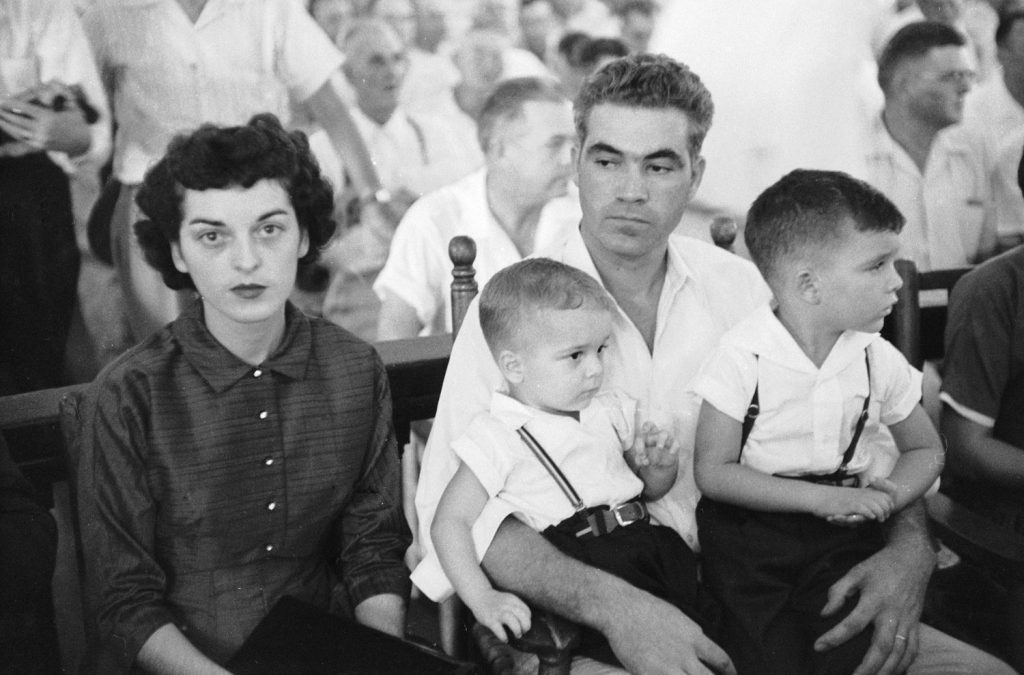 Defendant Roy Bryant sat with his wife Carolyn and their children during his trial for the kidnapping and murder of Emmett Till.
Ed Clark; Life Pictures/Shutterstock 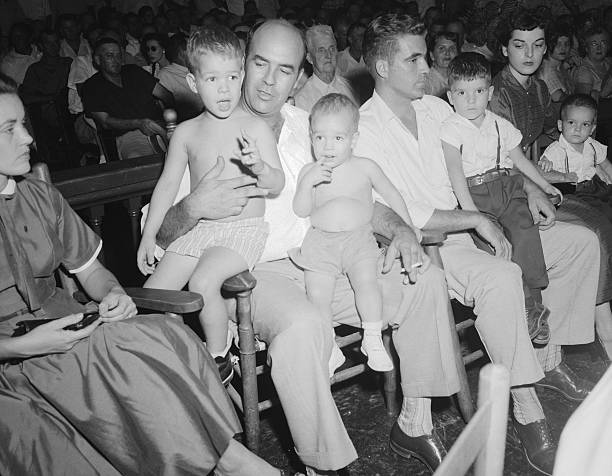 (Original Caption) “Wolf Whistle” Murder Defendants and Children in Court. Sumner, Mississippi: John W. Milam and Roy Bryant, on trial for the “wolf whistle” murder of 14-year-old Chicago Negro boy Emmett L. Till, are shown in court with their children. Roy’s wife, Carolyn, right, holds Lamar, 2. Milam holds his two boys and Bryant holds another son Roy, Jr., 4. “Uncle Mose” Wright, grand uncle of the victim was the first witness for the state today and the first witness of the trial. Standing in the witness box, Wright pointed to Bryant and Milam and declared: “There they are,” identifying the defendants as the two white men who spirited young till away on the night of August 28. 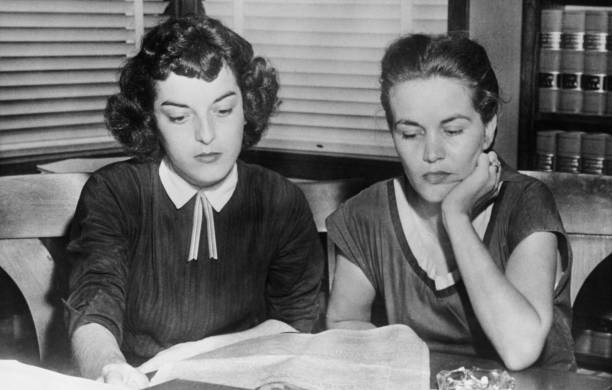 Carolyn Bryant and Juanita Milam (1927-2014), the wives of Roy Bryant and John William Milam, who stand accused of the kidnap and murder of Emmett Till, sitting in their husbands’ lawyer’s office across the street from the courthouse, reading newspaper accounts of the trial at Sumner courthouse in Sumner, Mississippi, September 1955. Black teenager Emmett Till was alleged to have whistled at Carolyn Bryant. (Photo by Bettmann Archive via Getty Images) 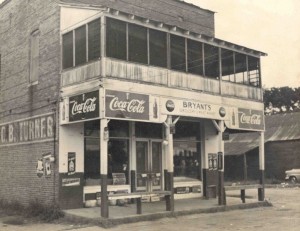 “MONEY, Miss. — Along the edge of Money Road, across from the railroad tracks, an old grocery store rots.

In August 1955, a 14-year-old Black boy visiting from Chicago walked in to buy candy. After being accused of whistling at the white woman behind the counter, he was later kidnapped, tortured, lynched, and dumped in the Tallahatchie River.

The murder of Emmett Till is remembered as one of the most hideous hate crimes of the 20th century, a brutal episode in American history that helped kindle the civil rights movement. And the place where it all began, Bryant’s Grocery & Meat Market, is still standing. Barely.

Today, the store is crumbling, roofless, and covered in vines. On several occasions, preservationists, politicians, and business leaders — even the State of Mississippi — have tried to save its remaining four walls. But no consensus has been reached.”  NY TIMES 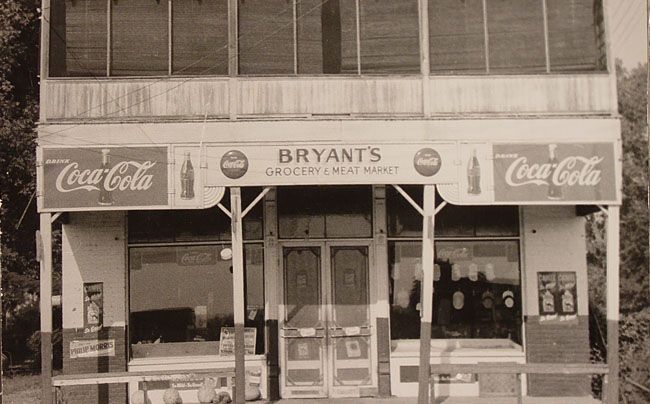 “Several attempts to purchase the building, in the hopes of turning it into a Civil Rights Museum, have been thwarted by the children of the late Ray Tribble, who own it. Ray was one of the jurors who voted to acquit Emmett’s murderers, and who defended his decision long after the trial. There’s no other word that can describe this situation other than disgusting. Thankfully, organizations like the Emmett Till Legacy Foundation are working hard to preserve his memory.”

“Blacks stopped frequenting groceries owned by both the Bryant and Milam families. The stores soon went out of business. Unable to find work, Roy took his family to East Texas and attended welding school. His half-brother J. W. followed him soon after. Years later, both men would return to Mississippi.”

The ruins of the Bryant’s Grocery & Meat Market storefront are all that remains of the store itself, but a historical marker stands at the site and is part of the Mississippi Freedom Trail. 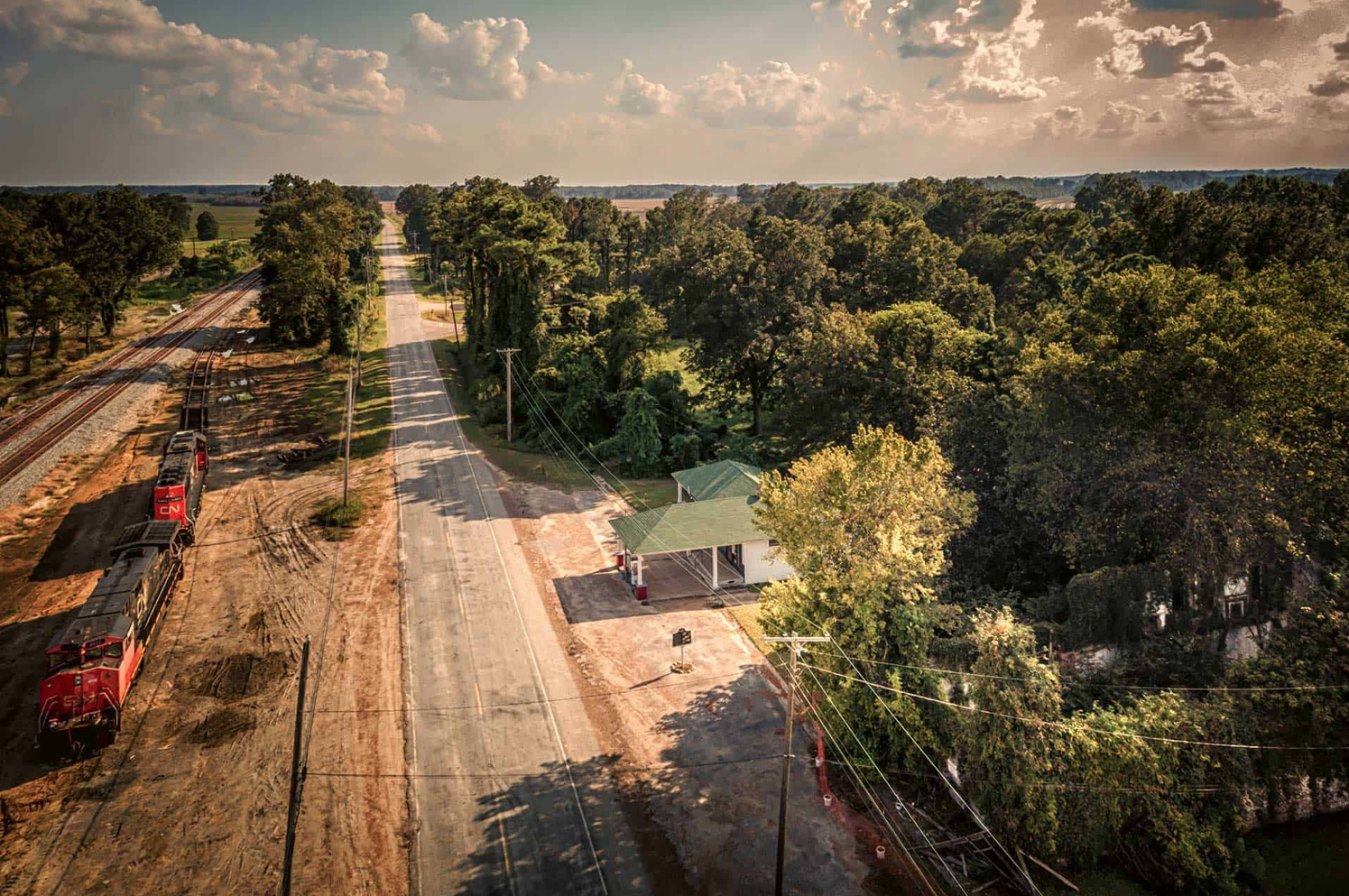 Money is an unincorporated Mississippi Delta community near Greenwood in Leflore County, Mississippi, United States. It has fewer than 100 residents, down from 400 in the early 1950s when a cotton mill operated there. Money is located on a railroad line along the Tallahatchie River, a tributary of the Yazoo River in the eastern part of the Mississippi Delta. The community has ZIP code 38945 in the Greenwood, Mississippi micropolitan area. 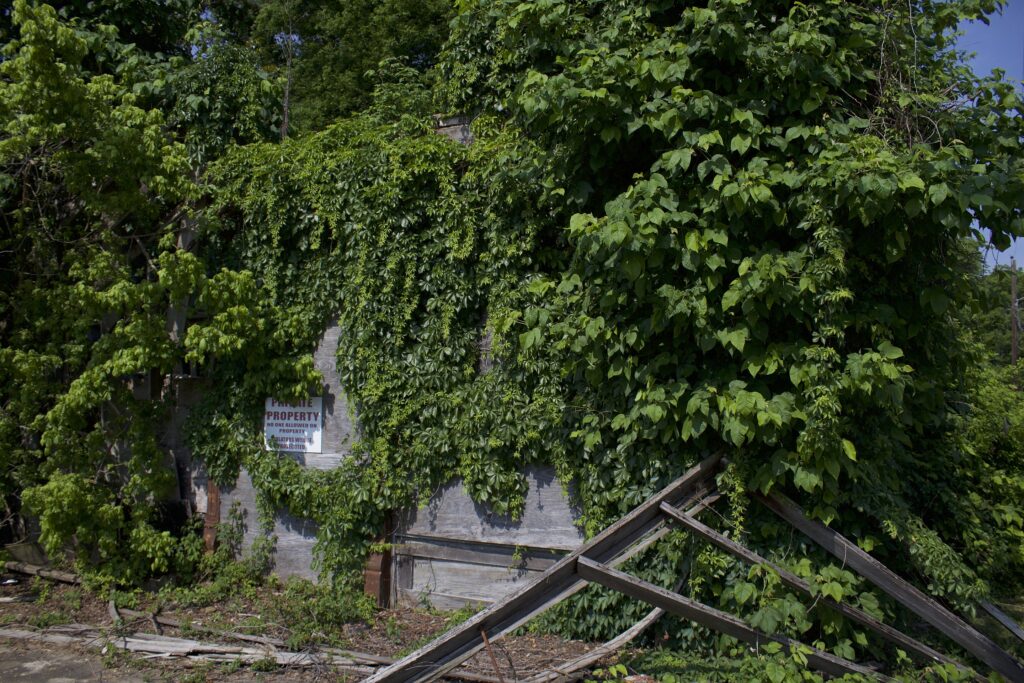 The 2018 remains of Bryant’s Grocery and Meat Market, where Emmett Till encountered Carolyn Bryant in 1955