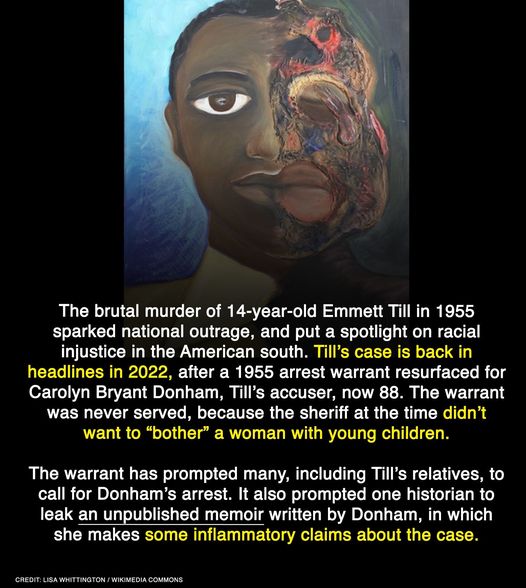 Left: From 1920 to 1938, the NAACP unfurled a flag outside its headquarters on Fifth Avenue in New York City, announcing to the world: “A MAN WAS LYNCHED YESTERDAY.”
PHOTOGRAPH BY LIBRARY OF CONGRESS/CORBIS/VCG VIA GETTY IMAGES
Right: In 2015, after Walter Scott, a black man, was shot in the back by a White police officer in South Carolina, artist Dread Scott created this banner, evoking the historic image of the banner the NAACP flown outside its headquarters in New York.
PHOTOGRAPH AND ARTWORK BY DREAD SCOTT

“Historically, you could be lynched for anything.”

As Black people continue to die at the hands of police and vigilantes, the nation faces its long history of racial violence. 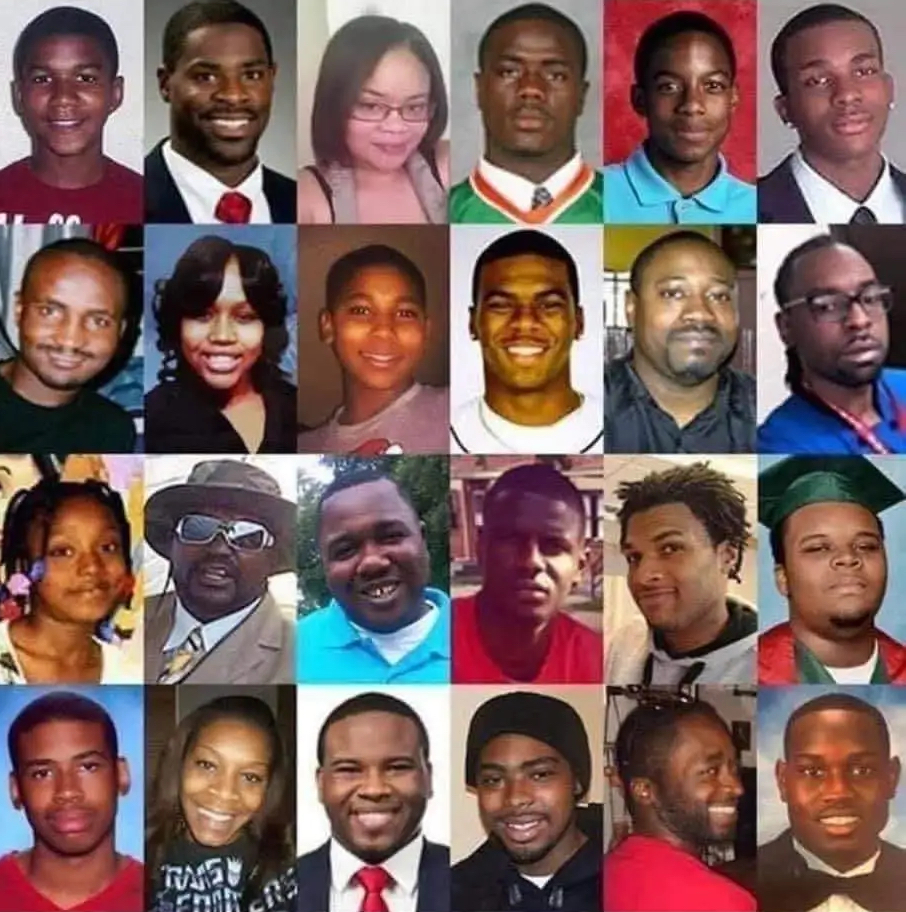 But how far has America actually come since then?

TRAYVON MARTIN was walking home with iced tea and Skittles. Shot by George Zimmerman, who was found not guilty.

KEITH SCOTT was sitting in the car, reading. Shot by a police officer, who was not charged.

ATATIANA JEFFERSON was looking out her window, shot by a police officer, who is still under indictment for murder.

JONATHAN FERRELL was asking for help after an auto accident. He was shot twelve times by police, the case ended in a mistrial.

JORDAN EDWARDS was riding in a car. Shot in the back of the head by a police officer, who was found guilty of murder.

STEPHON CLARK was holding a cell phone. He was shot 8 times, 6 in the back. The officers were not charged.

AMADOU DIALLO while taking out his wallet, officers fired 41 shots, by four officers, who were all acquitted.

RENISHA MCBRIDE after an auto accident knocked on a door for help and was shot with a shotgun. The homeowner was found guilty of second-degree murder.

TAMIR RICE was playing with a toy gun, he was shot by a police officer arriving on the scene. The officer was not charged.

SEAN BELL was hosting a bachelor party, 50 rounds were fired by police officers, who were found not guilty of charges.

WALTER SCOTT was pulled over for brake lights and was shot in the back by a police officer, who pleaded guilty to civil rights violations.

PHILANDO CASTILE was pulled over in a car, he told the officer he had a legally registered weapon in the car and was killed. The officer was acquitted of all charges.

AIYANA JONES was sleeping and was accidentally shot by the officer in a raid on the wrong apartment. The officer was cleared of all charges.

TERENCE CRUTCHER was in a disabled vehicle and shot by a police officer, who was found not guilty of manslaughter.

ALTON STERLING was selling CDs, shot at close range while being arrested. No charges were filed.

FREDDIE GRAY was beaten to death by officers while being transported in a police van. All officers involved were acquitted.

JOHN CRAWFORD was shopping at Walmart, holding a BB gun on sale, and talking on his phone. The police officer was not charged.

MICHAEL BROWN was shot by twelve times by the officer, including in the back. No charges were filed.

JORDAN DAVIS was killed because he was playing loud music. The shooter was found guilty of first-degree murder in a second trial.

SANDRA BLAND was pulled over for a traffic ticket, tasered, and arrested. She allegedly committed a suspicious “suicide” while in jail. There were no charges.

BOTHAM JEAN was shot at home, which police the officer mistook for her own. The officer was found guilty of murder and sentenced to only 10 years.

OSCAR GRANT was handcuffed and face-down, and the officer shot him in the back. Officer was found guilty of involuntary manslaughter.

COREY JONES was standing by his disabled vehicle and was shot three times by a police officer, who was found guilty of murder.

ERIC GARNER was suspected of selling cigarettes and choked to death by a police officer. The grand jury decided not to indict the officer.

AHMAUD AUBERY was jogging, shot by two men who claimed they suspected him of burglaries. Both men were charged with murder and aggravated assault.

GEORGE FLOYD was suspected of using a counterfeit bill at a store. handcuffed and face-down with the officer’s knee pressed against his neck for nine minutes, Floyd died. Initially, the officer was only charged with third-degree murder. Justice is pending.

MAURICE GORDON was fatally shot during a routine traffic stop. This case is unfolding and pending. We will update as results come about.

BREONNA TAYLOR was murdered by 3 Louisville police officers who used a battering ram to force their way into her apartment. They claimed to be looking for 2 suspects who were already in police custody. Neither of the two lived at the residence. The officers fired 22 shots, 8 hitting and killing Breonna. This case is still unfolding, we will update you as results emerge. You can help action this cause by doing the instructions here.

RAYSHARD BROOKS was sleeping in his car at a Wendy’s drive-through. Police were called. Two officers tried to arrest Brooks, he tried to get away and was tased in the back by one officer while running away, then shot in the back 3 times by another. This murder took place in Atlanta, on Friday, June 12th as the world protested police brutality against Black people. There’s no respect for Black Lives when police are forcing.

ROBERT L. FULLER was found hanging from a tree directly across the street from City Hall. What was ruled a “suicide” is getting an independent review as this seems more like a lynching. Stay tuned for developments.

MALCOLM HARSCH case happened two weeks prior to Fuller’s case. The family and protestors are calling for a thorough investigation into the hanging (racist lynching) of another Black man in California.

ADAM TOLEDO was a 13-year-old teen who was killed by a Chicago police officer who claimed the boy had a gun when he instructed him to drop the weapon and turn around. Adam did not have a gun in his hand when he turned around to comply with police instructions.

DUANTE WRIGHT was murdered by former officer Kimberly Ann Potter who claimed to accidentally shoot Wright saying she mistook her gun for her taser.

MA’KHIA BRYANT was murdered by Columbus police officer minutes before George Floyd’s killer was convicted of murder. The teenager was shot 4 times and killed after calling the police herself to gain help from being attacked. She was holding a knife when killed. 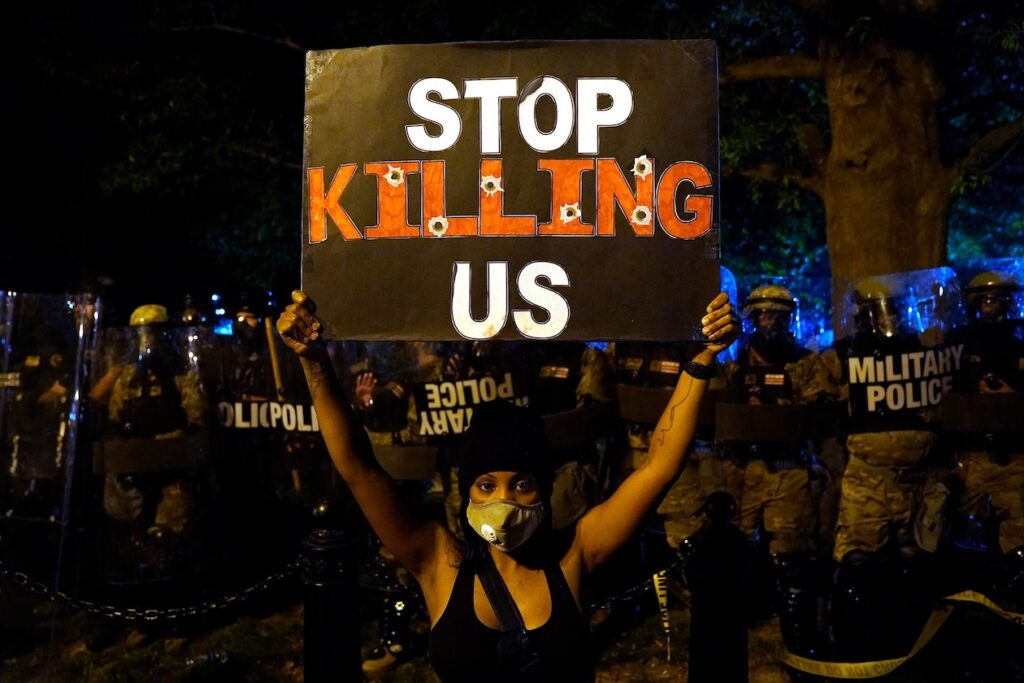 A demonstrator holds a sign during a protest outside the White House, where hundreds gathered after the death of George Floyd. On Monday, June 1, police shot tear gas at peaceful protestors and used flash grenades to clear a path through Lafayette Square to allow space for President Donald Trump to walk from the White House to St. John’s Church, where he stood posing for cameras and holding a bible.
PHOTOGRAPH BY EVAN VUCCI, ASSOCIATED PRESS